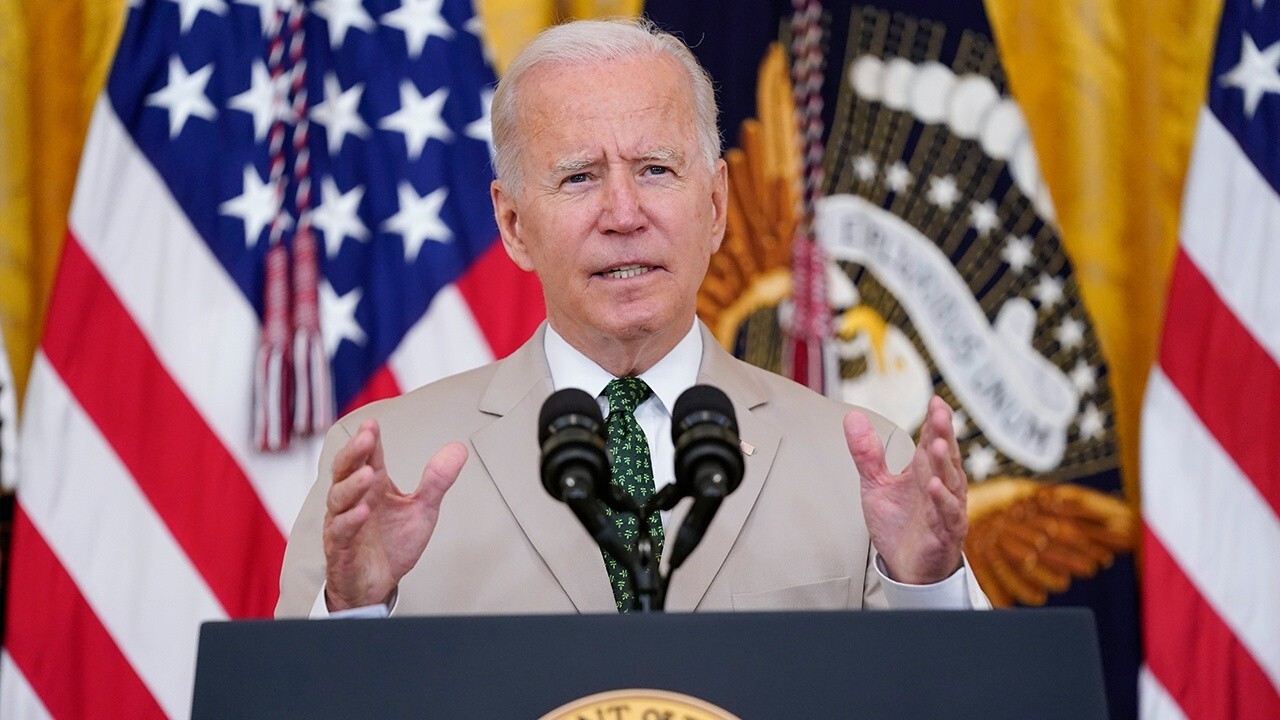 President Biden speaks on jobs, infrastructure and the American economy.

President Biden touted the bipartisan infrastructure deal and job growth in a speech Friday following the release of a robust July jobs report, while also renewing the push for Americans to get vaccinated against COVID-19.

The president delivered remarks from the White House, where he praised the Senate for moving forward on the bipartisan infrastructure bill, which is likely to pass this weekend.

Biden said the bill would "end years of gridlock in Washington and create millions of good-paying jobs," as well as "put America on a new path to win the race for the economy in the 21st century."

US ECONOMY ADDS 943K JOBS IN JULY, BLOWING PAST EXPECTATIONS

"It will enable us to not only build back, but build back better before the economic crisis hit," the president said, before thanking the Republican senators who worked on the bill with him.

"This bill makes key investments to put people to work all across the country… and it’s going to put Americans to work in good-paying union jobs building and repairing our roads, bridges, ports, airports," Biden said, adding that he expects the Senate to move toward building the "framework" for the rest of his Build Back Better agenda after the infrastructure bill passes.

The president also claimed the bill will give "tax cuts to the middle class" by "investing in childcare and home care for seniors," among other investments, without raising taxes "by even one cent" on Americans’ whose annual income is less than $400,000.

Biden added that "90%" of the jobs created by the package "will not require a college degree" and be a "blue-collar blueprint."

He then began to tout the newly released jobs report by the Labor Department, which blew past analysts' expectations as the unemployment rate fell to 5.4%.

Biden also praised his administration's pandemic response, saying the American Rescue Plan gave individuals "the tools to fight the pandemic and rebuild our economy." However, he warned that there are still many people who need to get vaccinated against COVID-19.

"Cases are going to go up before they come back down," Biden said before reiterating his commonly used phrase that the coronavirus pandemic is "a pandemic of the unvaccinated."

The president said that around 400 people will die in America today because of the delta variant and encouraged Americans to get vaccinated, noting the recent record of 4 million vaccinations administered in one day.

Biden also thanked the companies in America who are requiring employees get vaccinated against COVID-19 in order to come to work.

The president’s speech comes after the new jobs report saw the economy add 943,000 jobs in July.