Galvanized by the racial justice protests and the coronavirus pandemic, charitable giving in the United States reached a record $471 billion in 2020, according to a report released Tuesday that offers a comprehensive look at American philanthropy.

The Giving USA report says Americans gave more to charity last year than in 2019, despite an economic downturn that disrupted the paychecks of millions. Faced with greater needs, estates and foundations also opened up their pocketbooks at increased levels – resulting in a 5.1% spike in total giving from the $448 billion recorded for 2019, or a 3.8% jump when adjusted for inflation.

"In some ways, 2020 is a story of uneven impact and uneven recovery," said Amir Pasic, the dean of Indiana University’s Lilly Family School of Philanthropy, which researched and wrote the report published by the Giving USA Foundation.

MacKenzie Scott stormed the philanthropy world in 2020 with $5.7 billion in unrestricted donations to hundreds of charities. (AP)

"Many wealthier households were more insulated from the effects of COVID-19 and the ensuing economic shock, and they may have had greater capacity to give charitably than households and communities that were disproportionately affected and struggled financially," Pasic said in a statement.

Although wealthy individuals contributed to the spike in giving to educational nonprofits and other charities, the findings for the report come from an analysis of IRS tax data for 128 million U.S. households, as well as other surveys. It’s the first study to provide a comprehensive look into how donors – big and small – stepped up to meet the increased needs brought forth by the economic crisis, racial unrest and a global pandemic that has killed an estimated 600,000 Americans.

Experts say the strong year-end finish by the S&P 500, which closely tracks with giving from individuals and foundations, along with the uptick in personal income by the end of 2020, likely contributed to the spike. 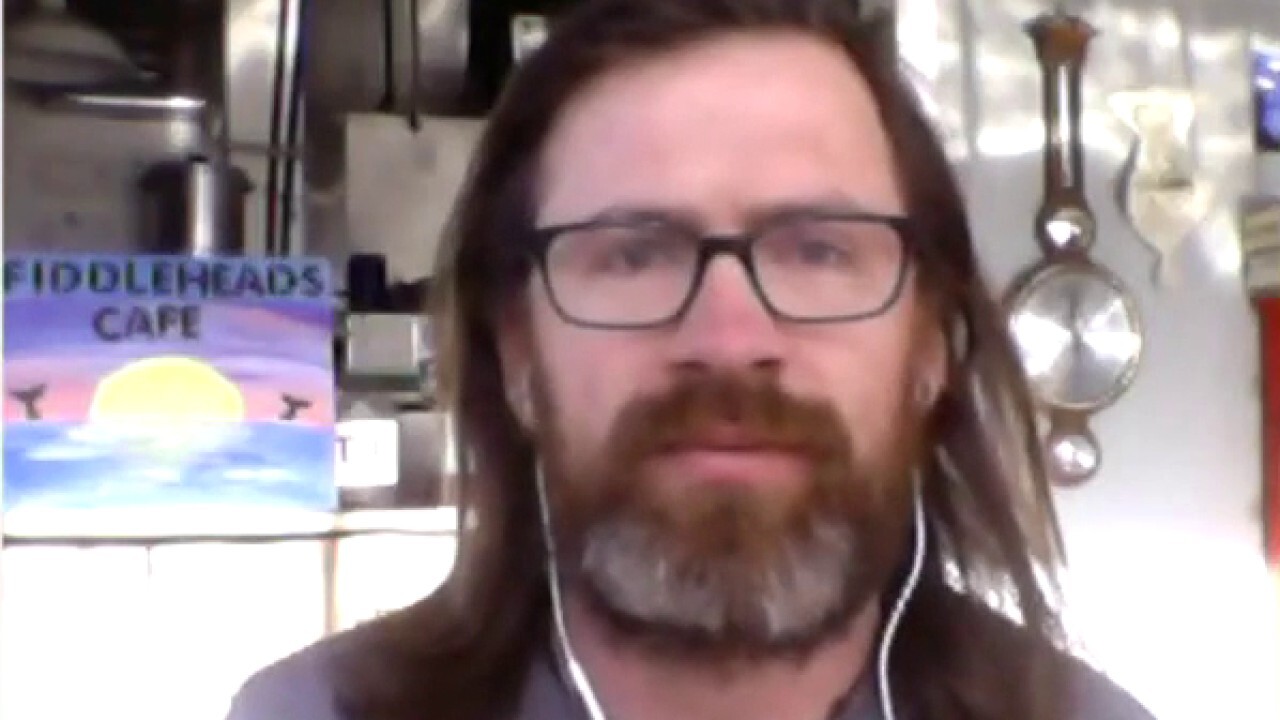 Chris Castelman, cafe owner in Mendocino, California, argues people visiting the restaurant understand the level of collateral damage that has been done to businesses.

The spike in giving was coupled with changes many foundations adapted in the early days of the pandemic to provide more flexibility to grantees in their pandemic response. The changes included loosening restrictions on how to use prior and new donations, but how long that will continue, if at all, remains unclear.

By contrast, companies gave about 6% less in 2020 than they did in 2019, the report said. Experts note giving by corporations is closely tied to GDP and pre-tax profits, which both declined last year.

Following last year’s racial justice protests, many corporations made sizable pledges that aim to improve racial equity in the U.S. But those commitments have often been multi-year initiatives. Many pledges also consist of other minority-focused business investments apart from direct philanthropy, including commitments to diversify vendors and offer loans to minority-owned businesses.

Most nonprofit categories experienced a boost in contributions, with the strongest growth seen among public-society groups that include civil rights organizations and other charities, like United Way. The nearly 16% increase in contributions also included donations given to donor-advised funds, which are like charitable investment accounts that draw strong opinions across the philanthropic world.

Donor-advised funds are often criticized because they aren’t required to make donations in any given year, but donors are able to take immediate tax deductions before charities get any of the money. A congressional bill, which follows a plan put forth by billionaire philanthropist John Arnold and others to accelerate the payouts, is now aiming to change that.

"It is important to recognize that the picture for individual households and organizations may have looked quite different, with many facing hardship even though total giving posted strong growth," said Laura MacDonald, the chair of the Giving USA Foundation.

Una Osili, the associate dean for research and international programs at the Lilly School, says that’s partly because a large chunk of pandemic-related donations went to vaccine research and other direct services offered by university hospitals. Those donations were counted as educational gifts, which saw a 9% spike compared to 2019. That growth was further fueled by billionaire Mackenzie Scott’s unrestricted donations to historically Black colleges and universities, tribal colleges and other schools.

Another reason for the decline in giving to health organizations, and the arts, was because Americans participated less in in-person activities, including fundraising walks and runs, during the pandemic. Anna Pruitt, the managing editor of Giving USA, says event cancellations, and the inability of many organizations to shift all their programming online also had a negative impact on fundraising.

Arts and culture organizations, in particular, have tended to struggle during economic recessions as donors give more focus to immediate basic needs. But Osili suggests fundraising success in 2020, for the most part, has depended on an organization’s ability to shift to new ways of engaging donors.

In order to recapture the interests of current donors and establish relationships with new ones, arts organizations "will need to demonstrate their relevance in light of current events," said MacDonald, of the Giving USA Foundation.

Although the boost in giving is something many nonprofits welcome, it may not continue as COVID vaccination rates increase and the racial justice protests continue to dissipate.

"As an optimist, I’d like to believe that Americans’ generosity will continue to grow," said MacDonald. "But as a realist, I understand that giving responds to larger economic forces. In 2021, we may also realize the benefits of engaging donors through galas and events, personal visits, and in-person experiences."