That’s according to new data from the Pew Research Center, which compares millennials’ financial well being to that of their older counterparts. The main finding: Education matters, and it has made a larger difference for millennials than some some previous generations.

Households headed by college-educated millennials ages 25 to 37 had a median adjusted income of $105,300, roughly $56,000 more than that of homes headed by high school graduates. The income difference by education ranged from $41,200 for baby boomers to $19,700 for the silent generation, by comparison.

Boomers with college educations brought in $95,182 overall, compared with $64,645 for the silent generation.

Quenton and Marchelle Ross show how education can pay off. While the two racked up $120,000 in student loans getting their bachelor’s and master’s, respectively, their degrees paved the way for good jobs, and they paid off the debt in less than three years. 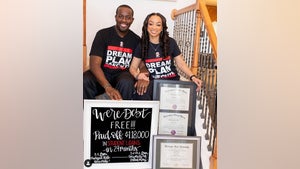 ‘It all boiled down to freedom’: How a Michigan couple paid off $120,000 in student loans in less than 3 years

“I didn't want to work my entire life … and always have to pay bills,” Quenton Ross told FOX Business. “It wasn't the just debt. It was really a bigger factor for us.”

That isn’t the case for everyone, though. Anthony Copeman is a certified financial education instructor and founder of millennial money website Financial Lituation.

He told FOX Business that although education plays a part in the amount someone earns, salaries have been stagnant for young people compared with their predecessors. “So while millennials are more educated than previous generations, it doesn’t always translate to more earnings.”

Middle-class income is on the decline in the United States, according to data from the Organization for Economic Cooperation and Development, and the shift is hitting young people hardest. Just 60 percent of millennials are considered middle-class (making between $23,416 and $62,442 for a single worker), compared with 70 percent of baby boomers when they were in their twenties.

Plus, millennials have to contend with exorbitant expenses that other generations did not, like rising housing costs and student loan debt. Pew found that more young people have outstanding student debt and the amount of it tends to be greater.

Nationwide, borrowers owe more than $1.5 trillion in student loans. According to the College Board, the average cumulative student debt balance was nearly $27,000 for public four-year school graduates, and $33,000 for graduates of private schools, in 2017.

And the share of young adult households with any student debt doubled from 1998 (when those in Generation X were ages 20 to 35) to 2016 (when millennials were that age).

That is perhaps why young people accumulated slightly less than older generations had at the same age. (Millennial households had a median net worth of $12,500 in 2016 versus $15,100 for those in Generation X at the same age and $20,700 for boomers.)

And that’s also, perhaps, why young people are opting to live at home after school and delay starting a family. “Millennials faced one of the most difficult times during the end of the last decade,” Copeman said.

‘IT ALL BOILED DOWN TO FREEDOM’: HOW A MICHIGAN COUPLE PAID OFF $120,000 IN STUDENT LOANS IN LESS THAN 3 YEARS
WILL CANCELING STUDENT LOAN DEBT HURT THE US ECONOMY?
STUDENT LOAN FORGIVENESS WOULD DAMAGE THE ECONOMY, EXPERTS SUGGEST

“Older millennials lost their jobs, middle-aged millennials had a hard time finding jobs and the younger millennials graduated with double the amount of student debt than those who graduated a little over a decade before them.”

But there’s light at the end of the tunnel. A study from Charles Schwab that tracked how 1,000 Americans, aged 21 to 75, manage and use their wealth, found that despite modern financial hurdles, young people are better at managing money than older generations.

Copeman thinks millennials can get even better. “Young people should understand that it doesn’t matter how much you make, but rather how well you manage. Making money is easy; managing can be challenging, especially in the consumer culture we live in.

“There is no one-size-fits-all millennial,” he said. But making a simple change, like writing down goals and keeping tabs on credit card and student debt could pay off in the long run.