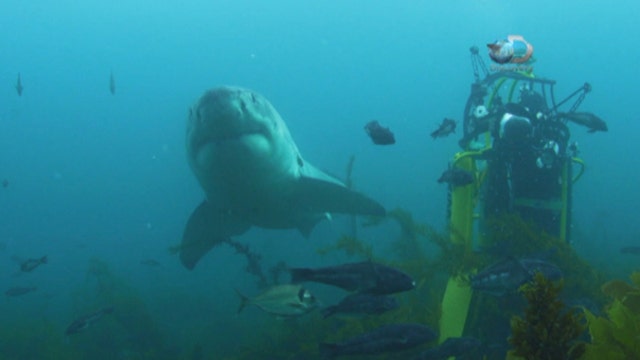 Just when you thought it was safe to turn on your TV: Shark Week

Shark Week filmmaker Andy Casagrande on filming sharks and how to keep safe in the water.

Discovery is "gonna need a bigger boat" if their "Shark Week" viewership continues to grow at this rate.

"Shark Week" kicks off Sunday, July 28 and goes until Sunday, Aug. 4 and offers 20 hours of original programming. While it may seem like a recent phenomenon, the summer event series actually premiered back in 1988, making it the longest-running cable television program in history. Now, it's broadcast in 72 countries.

The Discovery Channel originally created the series in an effort to emphasize the importance of conservation while also debunking myths about sharks. Since then, it's morphed into a television phenomenon that takes over social media, as users react to some shocking battles between sharks and their prey as they hunt in open water.

However, "Shark Week" has been criticized for seeming ploys to increase viewership. In 2010, it started incorporating something called "docufiction" which is fictitious programming amidst its true documentary work. By 2015, Discovery President Rich Ross said  they would remove that type of programming from "Shark Week." But in 2017, the network promoted a race between a great white shark and Olympic gold medalist Michael Phelps. It turns out that race was computer generated.

Despite the criticism, "Shark Week continues to dominate the ratings game. A recent addition to the highly anticipated week is celebrities participating in shark dives. In 2019, retired Marine and actor/comedian Rob Riggle will dive into the water with many different people, including Damon Wayans Jr., Adam Devine, Joel McHale and Anthony Anderson.

Also this year, "Shark Week" will premiere its first feature-length feature film called "Capsized: Blood in the Water," which recounts a true story about a shark encounter from October 1982.

"Shark Week" can be watched on The Discovery Channel whether on-air or via their app, "Discovery GO." Most people participate in the conversation online by using the hashtag #SharkWeek.