Bill Maher is no stranger to controversy, recently supporting the U.S. tipping into a recession.

Now, he’s rejoicing in the death of a billionaire, who died on Friday at age 79 following a long battle with cancer.

“I guess I’m going to have to re-evaluate my low opinion of prostate cancer,” he said, referencing Koch’s battle with the disease.

“As for his remains, he has asked to be cremated and have his ashes be blown into a child’s lungs,” Maher joked.

The HBO host claimed Koch and his brother Charles donated to fund climate science deniers, noting he was glad the billionaire died.

“I hope the end was painful," he said.

Koch was known for donating more than a billion dollars to a variety of medical, arts and science initiatives. 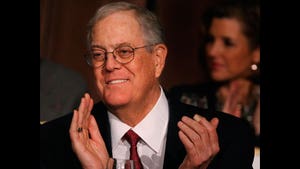 David Koch spent billions giving back to charity, here’s where it all went

A look inside the charitable giving of the industrial titan whose family announced his death Friday.

Other celebrities joined in Maher’s celebration of the conservative titan’s death, tweeting to fans their glee in his passing.