Teenage bitcoin millionaire Erik Finman said the secret to making money is sticking to your investment.

The 19-year-old self-made millionaire began investing in bitcoin when he was just 12 years old during a protest with his brother at the Jefferson Memorial in Washington, D.C.

“We were in the middle of getting tear gassed,” he said. “The Occupy Wall Street [movement] was happening at the time.” 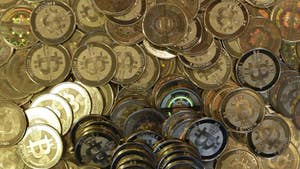 U.S. lawmakers and governmental agencies are calling for increased regulation on bitcoin and other cryptocurrencies, but more red tape may not be appropriate, experts say.

The cryptocurrency has been met with great skepticism from the world’s top bankers over how the virtual currency actually works. Unlike new money in a conventional financial system, bitcoin is not backed by any government or central bank. However in Finman’s opinion, that’s what make it valuable.

“It’s completely free from political intervention and cronyism and all that stuff,” he said.

The price of bitcoin crossed $11,000 over the weekend for the first time since the end of January.

Finman, who was recently named one of Time magazine’s most influential teens, sees prices climbing “even more in the future.”