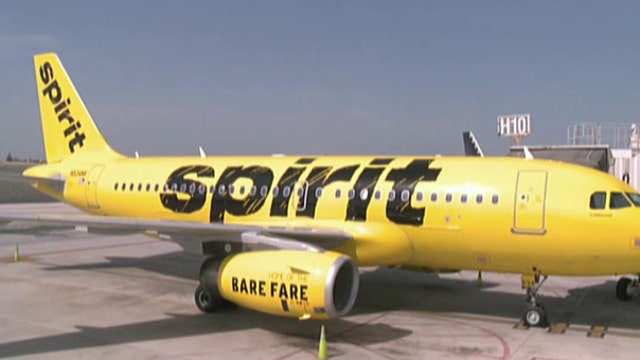 A class-action lawsuit against Spirit Airlines has been revived by a federal appeals court.

The lawsuit claimed that the low-cost airline deliberately surprised passengers with unexpected fees for their carry-on bags with tickets purchased through discount websites such as Cheapoair, Expedia and Priceline, Reuters reported Wednesday.

According to Reuters, the court made its decision because Spirit didn’t appear to let passengers know about “ambiguities” in the prices they would pay, between their tickets and the fees for carry-on bags.

BOEING CEO: 737 MAX ‘GOING TO BE ONE OF THE SAFEST AIRPLANES EVERY TO FLY’
BRITISH AIRWAYS GROUNDS NEARLY ALL FLIGHTS AS PILOTS STRIKE

"This is a great victory for air travelers nationwide," the plaintiff’s attorney, John Hermina of the Hermina Law Group, said in a statement.

A class-action lawsuit against Spirit Airlines was revived by a federal court of appeals. The suit claimed that the low-cost airline deliberately surprised passengers with unexpected fees for their carry-on bags with tickets purchased through discoun

"The Second Circuit has, once again, shown its sophistication in dealing with well-established legal doctrine," Hermina added.

Spirit Airlines did not immediately respond to FOX Business’ request for comment on Wednesday night.

According to a release from Hermina Law Group, the lawsuit claims that when people buy tickets for Spirit Airlines through one of those sites, the airline implies “that carry on items are included in the price of the ticket.”

“Once at the airport, Spirit Airlines forces the passengers to pay for a carry-on, or not board the aircraft,” the release said.

The lawsuit alleged that passengers could be charged up to $100 for a carry-on, according to the release.

However, Reuters reported Spirit had said its “contract of carriage” allows that passengers can take carry-on bags on their planes, as long as they pay a fee.