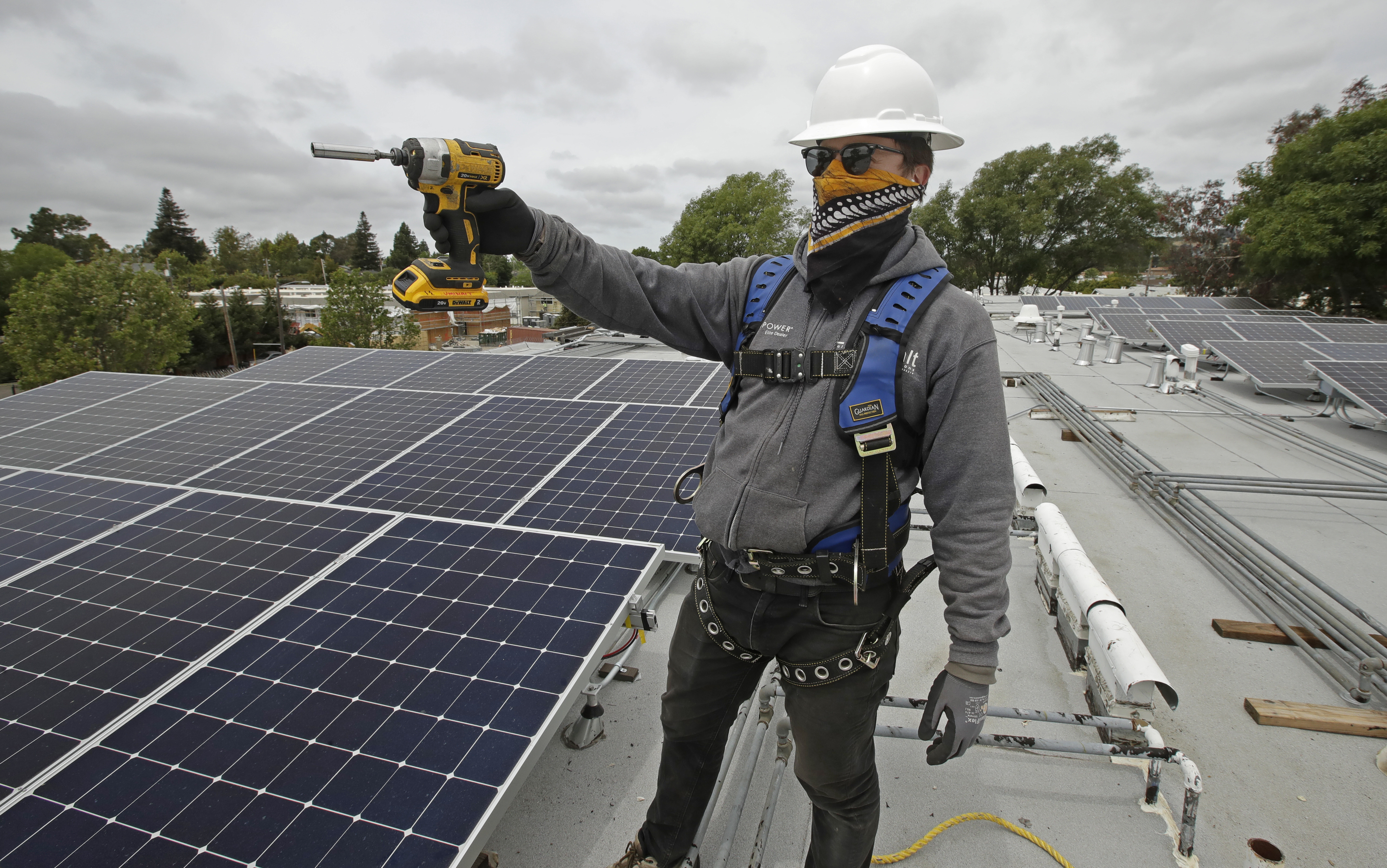 NEW YORK — The U.S. renewable energy industry is reeling from the new coronavirus pandemic, which has delayed construction, put thousands of skilled laborers out of work and sowed doubts about solar and wind projects on the drawing board.

In locked-down California, some local agencies that issue permits for new work closed temporarily, and some solar companies furloughed installers.

“There are many smaller companies going out of business as we speak," said Abigail Ross Hopper, president of the Solar Energy Industries Association. “Up to half our jobs are at risk.”

Leaders are confident the future is bright. But the worldwide slowdown is delaying a transition to cleaner energy that scientists say is not happening quickly enough to curtail climate change.

Even as some states move toward reopening, executives fear diminished incomes and work disrupted by layoffs and social distancing will do lasting damage.

The wind industry is plagued by slowdowns in obtaining parts from overseas, getting them to job sites and constructing new turbines.

“The industry was on a tremendous roll right up until the last month or two,” said Tom Kiernan, CEO of the American Wind Energy Association. ”That reversal is stunning and problematic.”

New solar installations could be 17% lower worldwide than expected this year, and wind turbine manufacturing could fall up to 20%, according to consulting firm Wood Mackenzie.

“Pre-pandemic, there were great dreams and aspirations for a record-setting year,” said Paul Gaynor, CEO of Longroad Energy, a utility-scale wind and solar developer. “I’m sure we’re not going to have that."

Fossil fuels such as natural gas and coal remain the leading providers of the nation's electricity, with nuclear power another key contributor, according to the U.S. Energy Information Administration.

But renewable sources — wind, solar, hydroelectric, biomass and geothermal — have jumped in the last decade as production costs have fallen and many states have ordered utilities to make greater use of renewable energy to reduce greenhouse gas emissions. Renewables produced nearly one-fifth of the country's energy last year.

The EIA predicts renewable energy, despite recent setbacks, will grow 11% this year — an indication of the sector's strong surge before the economy tanked. Meanwhile, coal-fired power is expected to decline 20% and gas generation to grow just 1%.

The setback for renewable energy still has been painful — even in California, where residential solar demand took off due to frequent blackouts and state laws requiring to new homes to produce as much energy as they consume.

“A lot of companies are just trying everything they can to just limp along and keep their workforce,” said Bernadette Del Chiaro, executive director of the California Solar and Storage Association.

All 20 employees were temporarily furloughed at Cinnamon Energy Systems, which sells residential and commercial solar systems in Northern California.

“I’m sure we’ll bounce back, just smaller,” CEO Barry Cinnamon said, adding that people might not spend as much as they once did, because their income will likely be down. "Whether that’s months or years, nobody knows.”

Luminalt, a San Francisco solar company, furloughed most of its 40 employees. And when work resumes, CEO Jeanine Cotter expects that projects will take longer and cost more to keep installers safe.

“Think about working on a roof with a mask,” Cotter said. “And think about not being able to pass a power tool to somebody unless you disinfect it before you pass it on."

Since his furlough in mid-March, Luminalt solar technician Tom Hicks has been collecting benefits but no salary — and he's worried about mortgage payments.

Still, there are hopeful signs. The Boston-based developer Longroad recently began a utility-scale solar project in California and secured new financing for another in Texas.

The wind and solar industries have asked lawmakers and federal agencies for help, including an extension of their four-year deadlines for completing projects without losing tax benefits. Similar assistance was granted during the 2008-09 recession.

Cattle graze on a pasture while a wind turbine stands in the distance at the Reading Wind Facility in Reading, Kan., on Monday, April 27, 2020. (AP Photo/Charlie Riedel)

The renewable energy industry's health is crucial to improving the climate and to a strong economic recovery, said Matthew Davis, legislative director for the League of Conservation Voters.

“My hope is that we would use this as an opportunity to build toward an economy that doesn’t depend on burning coal and oil and that is more resilient to the climate impacts that are heading our way,” Pershing said.