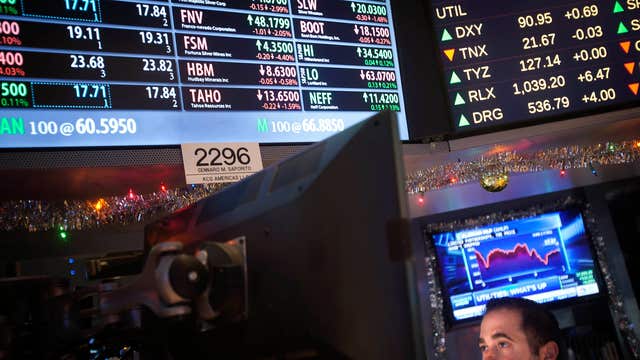 Are low oil prices leading U.S. into a recession?

The year is new, datebooks are unmarked yet the market atmosphere remains disconcertingly similar to 2014.  Equity markets turn to “free-fall mode”, followed by countless contrived explanations as to “why”, only to be quickly ensued by a vicious, unadulterated, bounce back.

Up to this point, the first “fall-out of ‘15”, is worth approximately 4.8% peak-to-trough -- 2093 on the S&P December 19 to 1992 on January 6 -- in a swift six trading days.  Flipping back the scored calendar pages of 2014, you will notice a pattern, a tessellation of sorts - as if this latest plunge is just another decoration, fitting together exactly along a wide swath of tapestry.

We enter 2015 on insecure footing.  While the underlying landscape looks relatively solid, with sturdy fundamentals reinforcing equity index levels that are still near all-time highs, risks have started to freeze-over in other asset classes.

It’s an inimitable period of sorts - one where other asset classes (FX, rates, sovereign credit, and commodities) are like neighbors surrounded with high hedges; buttressing the general proximity from the noise.  Now that the hedges are barren, neighbors can no longer keep themselves to themselves but rather, start to glare across at one another frostily.

In the last two generations, history has spotted a handful of oil dips similar to what we have at present.  History rhymes in that subsequent equity moves due to oil declines seem to be predicated chiefly on the “why oil dropped” and, today, it would be hard to argue anything other than flattish global demand has met a tidal wave of supply.  To date, lower oil is still a net economic virtue!

That said there are both good and bad connotations to any major market move – shadowy repercussions that may take a long while to be fully expressed.  Front and center would be S&P 500 forward earnings estimates which have been penciled-in per consensus at $128 - $130 for the last six months.  The fact that consensus hasn’t budged on this accepted figure (given the enormous clip in petroleum prices) is shocking yet discretely telling.

This may include the fact that oil prices will bounce – or normalize - sooner than we expect, that the downgrade in energy stocks earnings (within the S&P 500) will be offset by the ramping up of earnings in sectors like consumer discretionary – ones that will clearly benefit from lower petroleum, or that oil is simply joining most other commodities in adjusting to a very low world of inflation.

A handful of European leaders have recently cued that they are fully prepared to let Greece leave the 19-nation monetary union if Greece persists in flinching at reform measures as the Syriza party fully intends to do if it wins a majority in the late January election.  Surprisingly, infection to other peripheral bond markets remain controlled, suggesting an exit – albeit severely complicated – won’t be as material to global markets as first feared.  Or, markets just don’t believe exit to be likely and the new government will find common ground with the EU, ECB and IMF.

However, this “severely complicated” exit could very well set in motion a lot of offsetting forces – perhaps forcing the shape of immediate term ECB monetary policy.  And, by extension, this complication continues to invite an overly bearish outlook on all things Eurozone; perhaps the most consensual prerogative of trading desks around the globe!

They say credit spreads are too low for any ECB action to be impactful.  I agree on an academic level yet from a trading perspective, I’m reserving a front-row seat to see the mice scurrying off the ship when bold ECB action takes place, combined with lower petroleum prices igniting Eurozone growth and Eurozone equities.