Pacific Gas & Electric warned Friday that high winds this weekend could force the embattled utility giant to shut off power to about 850,000 customers in Northern California as a safety measure to prevent wildfires.

If implemented, the precautionary blackouts would begin on Saturday between 6 p.m. and 10 p.m. local time and last through midday Monday. Roughly 2.5 million people would be affected by the blackouts, which would mark the third time this month that PG&E has cut power in an attempt to prevent faulty equipment from sparking fires.

"The upcoming wind event has the potential to be one of the strongest in the last several years. It's also likely to be longer than recent wind events, which have lasted about 12 hours or less," PG&E Principal Meteorologist Scott Strenfel said in a statement. 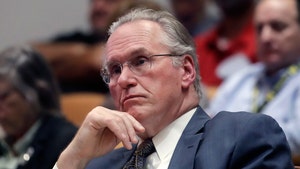 PG&E drew widespread criticism after it abruptly shut off power for roughly 700,000 homes earlier this month in California after forecasts suggested a high risk of wildfires.

PG&E acted after the National Weather Service warned that historically strong winds on Saturday and Sunday would “bring extreme fire weather conditions” in the Bay Area and its surrounding areas. The region has dealt with widespread wildfires in recent weeks that have forced evacuations and damaged homes.

Forecasters called for sustained winds of between 45-60 mph, with gusts of up to 70 mph at higher elevations. PG&E said the outages would vary as the weather system progresses.

"We understand that a longer shutoff would be very difficult for our customers. We are already working to minimize the length, including amassing a force of field personnel from PG&E, plus contractors and other utility companies, to be ready to tackle the inspection, repair and restoration process as soon as the weather passes," said PG&E Corporation CEO and President Bill Johnson.

PG&E equipment was found to be responsible for several wildfires in recent years. The company filed for bankruptcy last January, noting at the time that it had an estimated $30 billion in wildfire-related liabilities.

Local officials have repeatedly criticized PG&E for failing to inadequately address its role in the wildfires. Earlier this month, the California Public Utilities Commission ripped the company for failing to provide enough notice or detail to customers before enacting precautionary blackouts.

Johnson warned at an emergency meeting that PG&E may have to occasionally cut power to customers over the next decade until it can sufficiently upgrade its equipment and infrastructure.