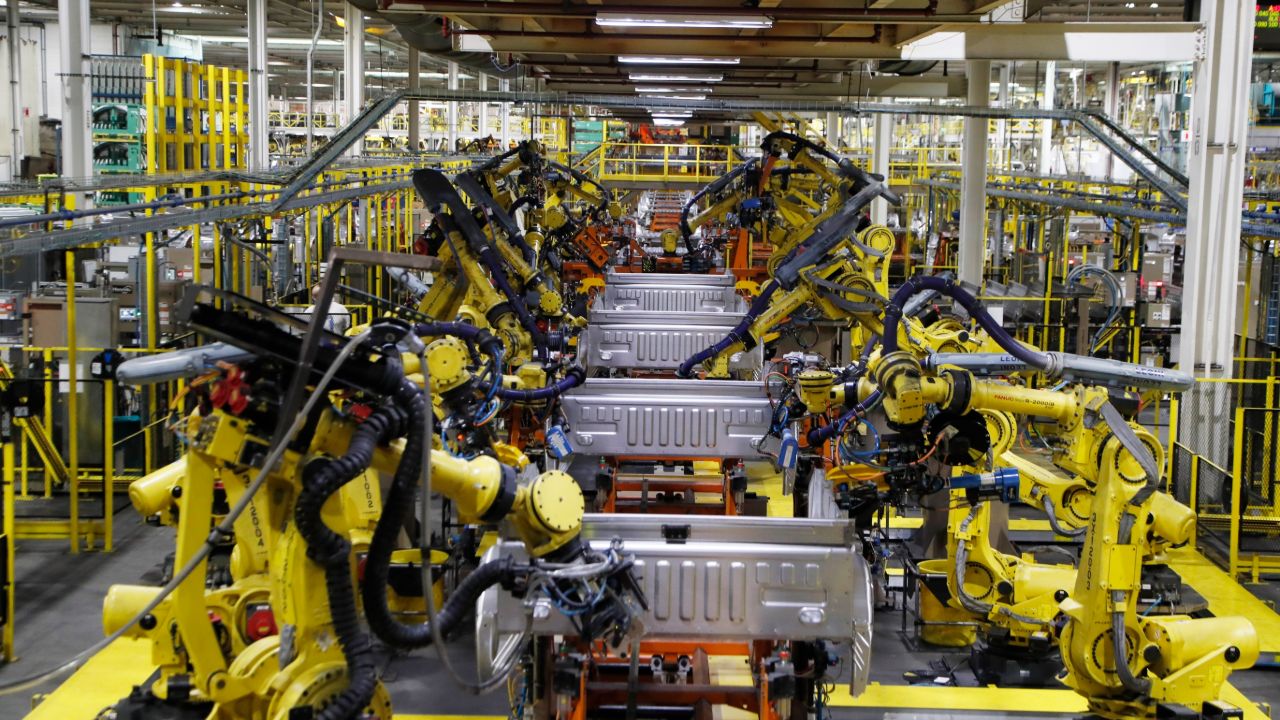 DETROIT — The U.S. auto industry’s coronavirus comeback plan was pretty simple: restart factories gradually and push out trucks and other vehicles for waiting buyers in states left largely untouched by the virus outbreak.

Yet the return from a two-month production shutdown hasn’t gone quite according to plan. For some automakers, full production has been delayed, or it’s been herky-herky, with production lines stopping and starting due to infected workers or parts shortages from Mexico and elsewhere.

“There’s a lot that can go wrong in bringing people back into the plants to try to build very complicated assemblies,” said Kristin Dziczek, vice president of industry and labor at the Center for Automotive Research, an industry think tank.

In this file photo, robots weld the bed of a Ford F-150 truck on the assembly line at the Ford Rouge assembly plant in Dearborn, Mich. (AP Photo/Carlos Osorio, File)

Most automakers closed factories in mid-to-late March when workers began to get sick as the novel coronavirus spread. The factories started to reopen on one or two shifts in mid-May as state stay-home restrictions eased, with automakers touting safety precautions that include checking workers’ temperatures, certification by workers that they don’t have symptoms, social distancing, time between shifts and plastic barriers where possible to keep workers apart.

Still, some workers got COVID-19, although it’s not known where they were infected. In some cases they still came to work, forcing companies to close plants temporarily for cleaning. In at least one case, a worker at a seat-making plant near Chicago got the virus, forcing a shutdown and cutting off parts. General Motors had to delay adding shifts at truck plants because the Mexican government wouldn't allow full parts factory restarts until June 1.

Ford seemed to be hit the hardest, pausing production a half-dozen times in Dearborn, Michigan; Chicago and Kansas City, Missouri; to disinfect equipment and isolate workers who may have come in contact with those who tested positive.

Honda and Toyota each reported brief production pauses to disinfect equipment when a small number of workers became infected. GM and Fiat Chrysler said they have not shut down production lines due to infected workers.

None of the automakers would give exact numbers of workers who have become ill since plants were restarted. The United Auto Workers union said Ford and GM have had at least a half-dozen cases, while Fiat Chrysler has had five. At least 25 UAW members employed by the Detroit Three have died from the virus this year, but it’s not clear where they caught it.

Dziczek says the on-and-off work stoppages will make it difficult for automakers to meet any increased demand.

“I think this is the way this is going to be for a while,” she said. “You need to have the confluence of healthy workers, a healthy supply chain and healthy demand all at the same time.”

U.S. auto sales have tanked since the virus began spreading in March, with sales in April down 46% from a year ago. Analysts are forecasting an improvement in May, but still a year-over-year decline of more than 30%. Cox Automotive predicts that May pickup truck sales will be down 18% from a year ago.

Despite those declines, automakers are reporting depleted supplies at some dealers, especially for pickup trucks in the Midwest.

Assembly lines at Ford’s 4,000-worker pickup factory in Dearborn, Michigan, have been closed twice due to workers with the virus or union fears that the shutdowns weren’t long enough.

Ford started resuming production and operations in the United States on May 18, 2020. (Photo courtesy Ford)

The UAW local at the plant filed a grievance against the company seeking a full shutdown and testing of every worker, said Gary Walkowicz, a local bargaining committeeman. The local also wants a 24-hour waiting period after equipment is disinfected to restart the plant.

“We have advocated for as much testing as possible and full testing when it’s available,” he said.

Ford procedures, following newer recommendations by the Centers for Disease Control and epidemiologists, say equipment is safe within minutes of being disinfected. In some instances the company has waited several hours before bringing workers back.

“We are requiring our workforce to follow these protocols in our facilities – and encouraging them to do the same outside of work,” Ford spokeswoman Kelli Felker said.

GM announced that production will get closer to normal starting Monday as it adds shifts “to meet strengthening customer demand and strong dealer demand.” A company statement said three pickup truck assembly plants will go from one to three shifts, while three SUV plants in the U.S. and Canada will go from one shift to two.

General Motors and Ventec Life Systems are partnering to convert the GM Kokomo, Indiana ERC building for the production of Ventec ventilators in response to the COVID-19 pandemic. (Credit: GM)

At GM’s pickup truck factory in Fort Wayne, Indiana, worker Andrea Repasky was waiting for the call to return to work on the third shift.

“I’m ready to go back, as long as everyone is cautious and stays safe,” she said. “We have to go back sometime, right?”

Fellow workers have told her that GM is doing all it can to protect workers from the virus as they return to work, Repasky said. Yet she knows infected people might unintentionally spread the virus if they don’t have symptoms.

“I don’t know that anyone anywhere can really make it so we don’t catch it,” she said.