Pro-democracy protesters in the international business hub of Hong Kong are trying a different tactic to spread their message in weekend demonstrations: show up small.

Rooted in ancient Chinese military philosophy, smaller groups of protesters showed up in multiple locations across the city to express their distrust in mainland China’s policies. The change in protest comes one week after the city banned the use of masks. The city’s leader, Carrie Lam, used emergency powers to impose the rule until the legislature resumes its duties Wednesday.

Reports from the ground indicate police made a number of arrests over the weekend, but many protesters were able to evade the authorities.

Violence between the two groups though, hasn’t stopped. A group of masked people reportedly beat a man in the streets, leaving him bloodied.

Police say an officer was attacked from behind, stabbed in the neck with a sharp weapon.

Video broadcast on local television showed masked protesters kicking and beating an officer as he tried to access his gun.

The smaller groups popped up throughout the city, blocking traffic and vandalizing stores in the area.

Among some of the stores getting damaged: a Huawei location where people used hammers to wreck its storefront. Protesters also spray painted messages like “we are not stealing,” inside a Starbucks store.

Protesters described their pivoting strategy as being “like water.”

The largest group to congregate included about 700 people who gathered in a shopping mall as a masked demonstrator played the saxophone.

By Sunday morning, people climbed a nearby peak to erect a statue of a masked demonstrator, named “The Lady Liberty of Hong Kong.”

The five-month-long demonstrations come as China and the U.S. have agreed to a “phase one deal” in the trade war.

The National Basketball Association also canceled media access to press for the rest of its preseason China tour following a number of controversies over how they’ve handled the fallout over Hong Kong’s protests. 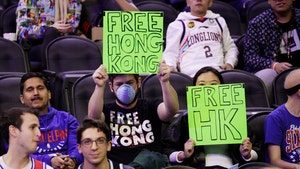 The NBA's business with China has become politically fraught since Daryl Morey, the general manager of the Houston Rockets, tweeted in support of the protesters.

Houston Rockets General Manager Daryl Morey recently tweeted support for the pro-democracy movement, before quickly removing and apologizing for it. Lawmakers in the U.S. called the league-pressured apology shameful, claiming the NBA was one of many U.S. companies bowing to mainland China over the protests.