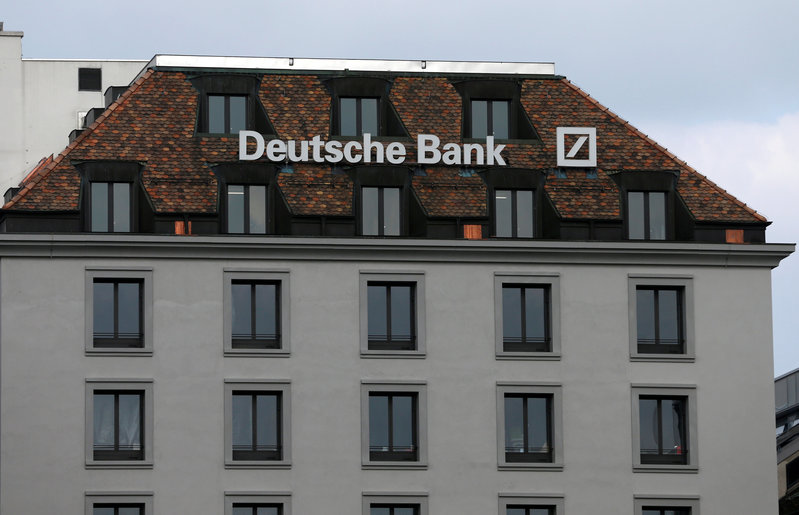 A whistleblower whose information helped U.S. and U.K. regulators investigate manipulation of global interest-rate benchmarks by Deutsche Bank AG was awarded nearly $200 million for assisting the probe, according to people familiar with the matter.

The payout is the largest ever by the Commodity Futures Trading Commission, which along with the Justice Department and U.K. Financial Conduct Authority settled enforcement actions against Deutsche Bank in 2015.

The CFTC’s announcement didn’t name the bank or the case, but the reward is related to the bank’s manipulation of the London interbank offered rate and similar widely used benchmarks, the people said.

A logo is pictured on the Deutsche Bank building in Geneva, Switzerland, October 11, 2016. REUTERS/Denis Balibouse/File Photo

The whistleblower’s application for an award was initially denied by the CFTC, but the U.S. derivatives regulator ultimately decided that the individual’s information was helpful after the whistleblower submitted a request for reconsideration.

"We’re very happy that the CFTC was able to reverse an earlier decision and turn around their thinking," David Kovel, a managing partner at law firm Kirby McInerney LLP who represents the whistleblower. "It says a lot about the people there that they don’t feel forced to stick with the wrong decision given the amount that’s at stake."

The Wall Street Journal previously reported that the former executive had provided information that helped CFTC and Justice Department investigations that led to roughly $2.5 billion in settlements with Deutsche Bank in 2015, including $800 million with the CFTC. They alleged that the bank manipulated Libor, a benchmark interest rate used to set short-term loans for global banks which traders and other bank employees could manipulate because it was based on oral submissions and not on actual transactions.

"The kind of information he provided was of the sort that was very hard to get if you don’t know where to look in a big financial organization," Mr. Kovel said.

Rigging Libor was profitable for banks and other market participants because billions of dollars worth of derivatives known as swaps were priced off movements in the benchmark.

The prospect of such a large payout pushed the CFTC whistleblower program into turmoil this year, as agency leaders contended there was no mechanism to pay the former bank executive and other applicants and keep funding the program. The agency averted a crisis after President Biden signed a bill in July to fund the program.

The CFTC investigation had already started by the time the whistleblower approached a separate agency, officials wrote in an order making the award. But the information proved valuable in interviews that authorities conducted as they expanded their probe, according to the order.

AS YIELDS RISE, SOME US BANKS SHIFT CASH TO TREASURIES

Dawn Stump, a Republican commissioner on the CFTC, said in a statement that she disagreed with basing the award partly on a fine levied by a foreign regulator. Like the CFTC’s announcement, Ms. Stump didn’t name the bank or the underlying case in her statement.

Ms. Stump wrote that the CFTC has never before given an award to a tipster based on an overseas regulator’s enforcement action.

"I believe we need to take an especially close look at cases where a whistleblower asks the commission to tap its limited Customer Protection Fund for an award relating to an action by a foreign futures authority to address harm outside the United States," Ms. Stump wrote.

Thursday’s award is the largest issued to a single person since the 2010 Dodd-Frank financial overhaul law created the programs to help avoid another massive fraud like Bernie Madoff’s Ponzi scheme.

The Securities and Exchange Commission last year issued its biggest whistleblower payment ever of about $114 million to a tipster.

"It’s showing that the CFTC program, like the SEC program, over the past 10 years, has really reached its maturity," said Mary Inman, an attorney representing whistleblowers at law firm Constantine Cannon LLP.