Copper got crushed this week in what seems to be a perfect storm for the industrial metal. 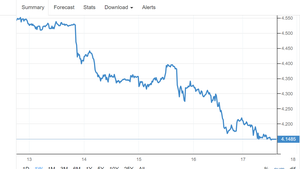 China announced plans to release copper, as well as aluminum and zinc from the country's reserves, according to the National Food and Strategic Reserves Administration. The move is the first in about a decade, according to Reuters. The move was made to help replenish a market that has been met with strong being drive by the post-pandemic recovery.

Adding to the selling, the Federal Reserve signaled it will begin to raise interest rates from near zero sometime in 2023. Some policymakers hinted a rate hike could come as early as 2022 if the economy rebounds and inflation heats up.

Even so, Federal Reserve Chairman Jay Powell signaled the recent price increases in commodities, such as lumber and copper, are likely due to supply and bottleneck issues and will come down as the market normalizes from post-pandemic kinks.

"These bottleneck effects have been larger than anticipated," Powell said during his press conference following the Wednesday meeting. "As these transitory supply effects abate, inflation is expected to drop back toward our longer-run goal, and the median inflation projection falls from 3.4 percent this year to 2.1 percent next year and 2.2 percent in 2023."

Also pressuring copper and other commodities was a stronger dollar. The Wall Street Journal Dollar Index on Friday booked its fifth day of gains.