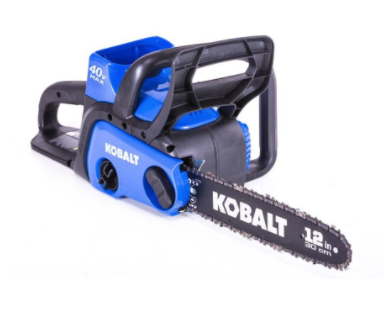 The saw may not turn off and stay in the on position, posing a chance of injury.

The recall was issued by the U.S. Consumer Product Safety Commission.

The product in question is the Kobalt Brand 40-volt Lithium Ion Cordless Electric Chainsaw in Blue or Black.

Hongkong Sun Rise Trading is the company that distributes the chainsaw.

The chainsaws were sold by Lowe’s Stores nationwide and online at Lowes.com from January 2014 through March 2020 for about $200.

The company says they’ve received over 100 reports of the potential hazard involving the saws, but no injuries have been reported.

If you have one of the recalled items, you’re urged to stop using the item and contact Hongkong Sun Rise Trading toll-free at 855-378-8826 or online at www.greenworkstools.com .