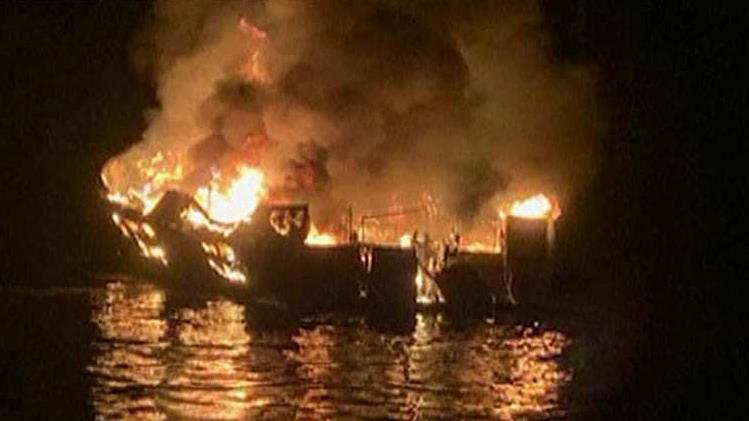 Only five people — the captain and four crew members — managed to escape after the 75-foot (23-meter) Conception caught fire on Sept. 2 off the Santa Barbara coast, northwest of Los Angeles. The boat burned to the waterline. One crew member was among the dead.

On Thursday, Democratic Sen. Dianne Feinstein announced a proposed measure called the Small Passenger Vessel Safety Act that would, among other things, require two escape routes for people below decks, leading to different parts of the boat.

The Conception had stairs leading onto the deck and a small emergency hatch. However, a preliminary report by the National Transportation Safety Board said passengers who were asleep in bunks were trapped by flames that kept them from escaping or crew members on deck from reaching them. They died of smoke inhalation.

“The Conception boat fire was a tragedy that could have been prevented had stronger safety measures been in place,” Feinstein said in a statement. “We can’t allow this to happen again.”

In this photo provided by the Ventura County Fire Department, VCFD firefighters respond to a boat fire off the coast of southern California, Monday, Sept. 2, 2019. The U.S. Coast Guard said it has launched several boats to help over two dozen people

The bill also would add stricter requirements for fire alarms and fire suppression equipment and would set safety standards for handling devices such as cameras and laptop computers that are powered by lithium-ion batteries, which can overheat and spark fires.

After the blaze, the U.S. Coast Guard issued a safety bulletin that suggested boaters limit charging of such batteries.

The cause of the fire remains under investigation. However, a lawsuit filed by the widow of a victim indicates that there were electrical cables charging phones, strobe lights and other battery-powered equipment in the galley above the guest quarters.

Authorities also have indicated that all crew members on the boat were asleep when the pre-dawn blaze erupted. Coast Guard regulations require passenger vessels to have a crew member on watch at all times.

The Conception was built in 1981. It was among more than 300 small vessels exempted from safety rules that required new vessels to have larger escape hatches with illuminated exit signs, the Los Angeles Times reported last month.

It was unclear whether such measures would have made a difference on the Conception but the safety bill would extend its new requirements to older boats. California Democratic Reps. Salud Carbajal and Julia Brownley co-authored the bill with Feinstein and introduced the companion measure in the House.

“If we are to save lives and make necessary reforms in the wake of the Conception tragedy, we must no longer allow older vessels to operate under antiquated regulations at the expense of our public safety,” Carbajal said in a statement.