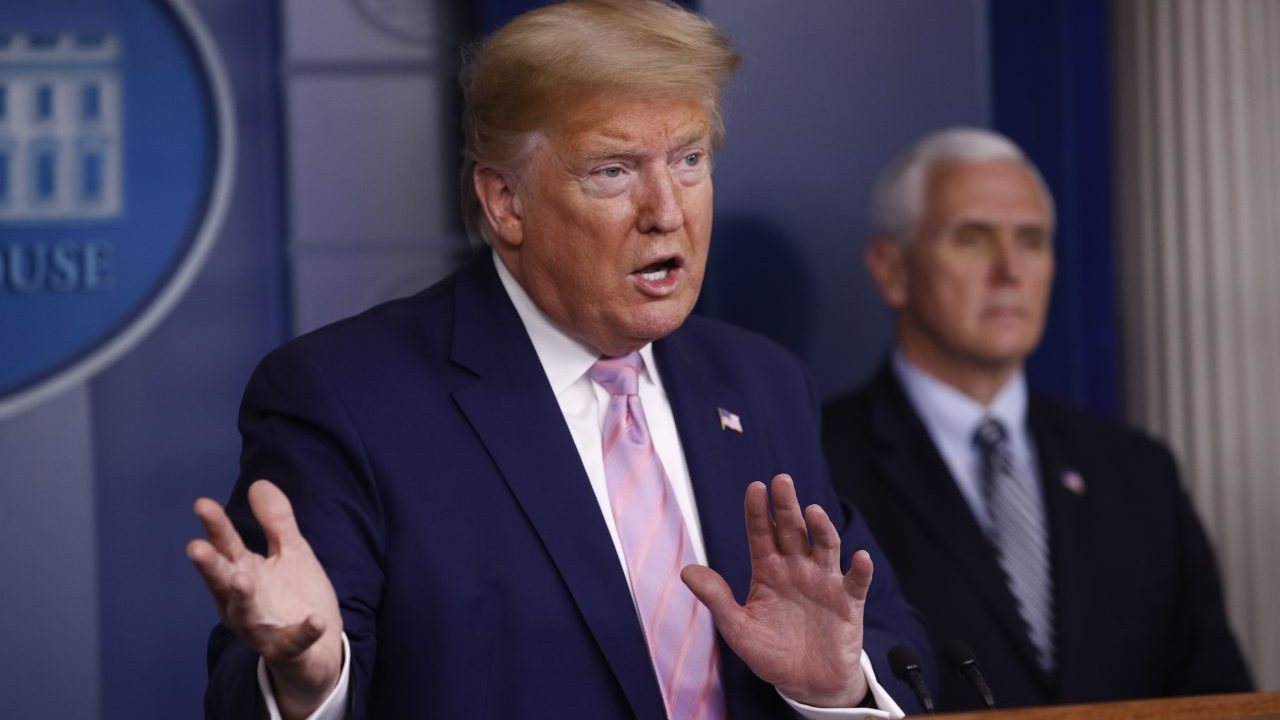 WASHINGTON (AP) — President Donald Trump is warning that the country could be headed into its "toughest" weeks yet as the coronavirus death toll mounts, but at the same time he expressed growing impatience with social distancing guidelines and said he's eager to get the country reopened and its stalled economy back on track.

"There will be a lot of death, unfortunately," Trump said Saturday in a somber start to his daily briefing on the pandemic, "There will be death."

Trump added a twist on his familiar push for a drug that hasn't been clearly shown to work to stop the virus — he said he may start taking it as a preventative measure after consulting with his doctor, even though there's no evidence to show it works for that, either.

The president initially had suggested the country could reopen by Easter but pulled back seeing projections of a staggering death toll even if restrictive measures remain in place. But just days after extending tough national guidelines through the end of April, staring down historic levels of unemployment and economic standstill, he was talking about reopening as soon as possible, and speaking Saturday with leaders of professional sports leagues about filling arenas again.

"This country was not designed to be closed," he said. "The cure cannot be worse than the problem."

The number of people infected in the U.S. has exceeded 300,000, with the death toll climbing past 8,400; more than 3,500 of those deaths are in the state of New York. For most people, the virus causes mild or moderate symptoms, such as fever and cough that clear up in two to three weeks. For some, especially older adults and people with existing health problems, it can cause more severe illness, including pneumonia, and death.

Much of the country is under orders to stay home, including professional sports leagues that were among the first to clamp down in the pandemic. Trump spoke by phone with top leaders including Roger Goodell of the National Football League and the NBA's Adam Silver, telling them he hoped to get people back in seats as soon as possible.

"I want fans back in the arenas," he said. "Whenever we're ready, as soon as we can."

The virus has decimated the sports world with the National Basketball Association and the National Hockey League suspending their seasons indefinitely and Major League Baseball postponing the start of its season. The NCAA basketball tournament was also canceled; so were college spring sports.

A person with knowledge of the call said some of the commissioners weren't quite as optimistic as Trump because of the concerns raised by public health officials but appreciated the president's desire to give people hope and fans a reason to be optimistic. The person requested anonymity to discuss the private call.

California's Gov. Gavin Newsom, who has three NFL teams in his state, was asked if he thought the NFL season would start on time in September. "I'm not anticipating that happening in this state," he said.

Hard-hit states were seeing cases rise. Trump suggested that some states were asking for more medical supplies than they really needed. He said the goal was to stay several days ahead of critical medical needs in each state.

"The fears of the shortages have led to inflated requests," he said.

Louisiana officials have said New Orleans is on track to run out of ventilators by next week. New York Gov. Andrew Cuomo, whose state is at the epicenter of the national pandemic with over 113,700 confirmed cases as of Saturday morning, has pleaded for ventilators for days. New York is poised to get more than 1,100 ventilators from China and Oregon.

Health officials did offer some hope that social distance measures were working. Fauci said he saw the efforts in action as he went out for a walk in Washington, D.C., and noticed people waiting six feet apart for restaurant take out.

"As sobering and a difficult as this is, what we are doing is making a difference," Fauci said.

But even as Fauci urged Americans to be patient and let mitigation efforts work, Trump said: "Mitigation does work. But again, we're not going to destroy our country."

The previously booming economy had been among Trump's biggest talking points as he heads into the 2020 presidential election, but the past few weeks have seen precipitous drops as the U.S. deals with the fallout from the virus that has shuttered businesses, gutted airlines and forced people into their homes.

The president also continued to tout hydroxychloroquine, a drug long used to treat malaria, rheumatoid arthritis and lupus, after very small preliminary studies suggested it might help prevent the coronavirus from entering cells and possibly help patients clear the virus sooner. But the drug has major potential side effects, especially for the heart, and large studies are underway to see if it is safe and effective for treating COVID-19.

Trump suggested he may consider whether he should start taking the drug, though he also said he'd ask his doctor first. Some studies are testing whether hydroxychloroquine can help prevent infections in health care workers, but none has suggested that others, such as the president, should take it to prevent infection.

With Congress away, House Speaker Nancy Pelosi pressed for the next aid package to be ready for an April vote in a letter to House Democrats.

"We must double down on the down-payment we made in the CARES Act by passing a CARES 2 package," she wrote about the just-passed $2.2 trillion bill, pushing for another additional unemployment benefits, small business loans and direct payments to Americans.