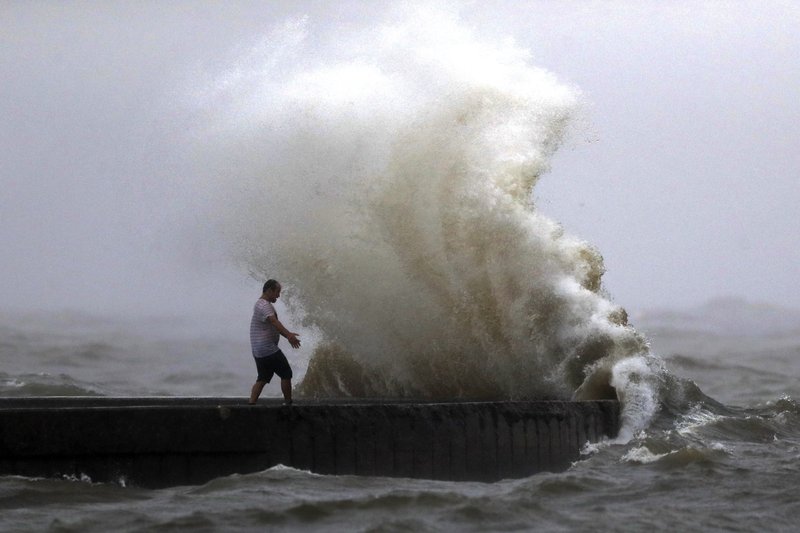 NEW ORLEANS — Cristobal weakened to a tropical depression Monday morning, after crashing ashore as a lopsided tropical storm a day prior in Louisiana and ginned up dangerous weather farther east, sending waves crashing over Mississippi beaches, swamping parts of an Alabama island town and spawning a tornado in Florida.

Cristobal made a Saturday afternoon landfall between the mouth of the Mississippi River and the since-evacuated barrier island resort community of Grand Isle, with 50-mph (85-kph) winds.

Making landfall well under hurricane strength, the storm had begun weakening as it moved inland — but heavy rainfall and a storm surge were continuing along the Gulf Coast, posing a threat across a wide area into the Florida Panhandle.

At 4 a.m. CDT Monday, Cristobal was centered about 40 miles (64 kilometers) north of Baton Rouge, Louisiana, packing slowed winds of 35 mph (56 kmph). With its drenching rains, Cristobal — moving north-northwest at 10 mph (16 kmph) — was expected to keep inundating the northern Gulf Coast well into Monday, but all tropical storm warnings had been discontinued.

Cristobal's forecast path takes it inland through northeastern Louisiana and southwestern Mississippi on Monday, continuing through Arkansas and eastern Missouri Monday night and Tuesday, and reaching Wisconsin and the western Great Lakes by Wednesday. The National Hurricane Center in Miami said additional weakening was expected through Tuesday but some strengthening was expected Tuesday night and Wednesday.

HOW TO HURRICANE-PROOF YOUR HOUSE

In New Orleans, the question was how much rain would fall and whether there would be enough breaks in the bands of heavy weather for the beleaguered pumping system to meet its latest test of keeping streets free of flood waters.

A wave crashes as a man stands on a jetty near Orleans Harbor in Lake Pontchartrain in New Orleans, Sunday, June 7, 2020, as Tropical Storm Cristobal approaches the Louisiana Coast. (AP Photo/Gerald Herbert)

In Alabama, the bridge linking the mainland to Dauphin Island was closed much of Sunday. Police and state transportation department vehicles led convoys of motorists to and from the island when breaks in the weather permitted.

Forecasters said up to 12 inches (30 centimeters) of rain could fall in some areas, with storm surges up to 5 feet (1.5 meters). The weather service warned that the rain would contribute to rivers flooding on the central Gulf Coast and up into the Mississippi Valley.

Rising water on Lake Pontchartrain near New Orleans pushed about 2 feet of water into the first floor of Rudy Horvath’s residence — a boathouse that sits on pilings over the brackish lake. Horvath said he and his family have lived there a year and have learned to take the occasional flood in stride. They’ve put tables on the lower floor to stack belongings above the high water.

“We thought it would be pretty cool to live out here, and it has been,” Horvath said. “The sunsets are great.

COSTLIEST HURRICANES IN US HISTORY

Elsewhere in south Louisiana, water covered the only road to Grand Isle and in low-lying parts of Plaquemines Parish at the state's southeastern tip. “You can't go down there by car,” shrimper Acy Cooper said Sunday of one marina in the area. “You have to go by boat.”

In Florida, a tornado — the second in two days in the state as the storm approached — uprooted trees and downed power lines Sunday afternoon south of Lake City near Interstate 75, the weather service and authorities said. There were no reports of injuries.

The storm also forced a waterlogged stretch of Interstate 10 in north Florida to close for a time Sunday.

Rain fell intermittently in New Orleans famed French Quarter on Sunday afternoon, but the streets were nearly deserted, with many businesses already boarded up due to the coronavirus.

Daniel Priestman said he didn’t see people frantically stocking up as in previous storms. He said people may be “overwhelmed” by the coronavirus and recent police violence and protests. They seemed “resigned to whatever happens — happens,” he said.

At one New Orleans intersection, a handmade “Black Lives Matter” sign, wired to a lamppost, rattled in a stiff wind as the crew of a massive vacuum truck worked to unclog a storm drain.

The Sewerage & Water Board of New Orleans said the city’s aging street drainage system had limits, so residents should avoid underpasses and low-lying areas prone to inevitable street flooding.

Jefferson Parish, a suburb of New Orleans, had called for voluntary evacuations Saturday of some low-lying communities because of threatened storm surge, high tides and heavy rain.