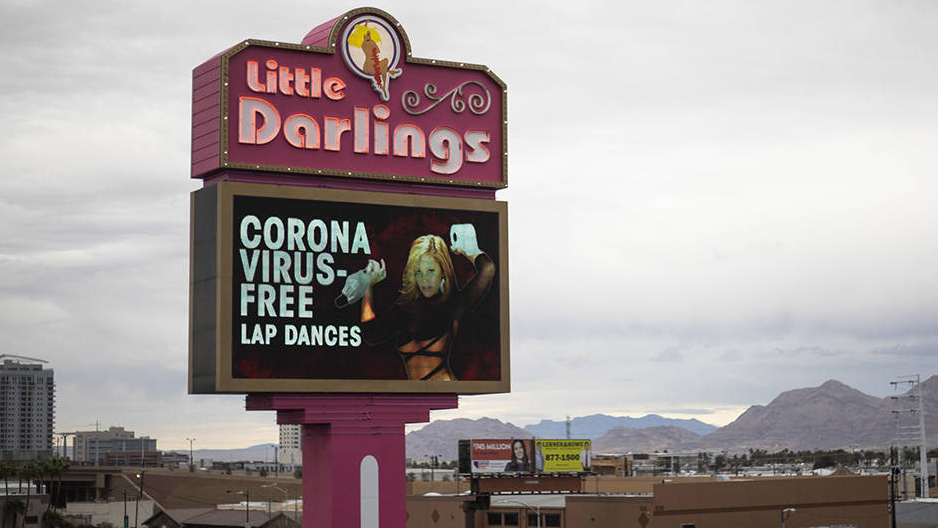 Gentlemen’s clubs are taking measures to protect guests as the country reopens — but are they enough to strip away their customers’ fears?

The nation’s strip clubs, as largely non-essential businesses, were forced to close or rethink their operations after the coronavirus health crisis began to grip the nation earlier this year. But while some found new ways to keep workers employed — like the one in Portland that pivoted to food delivery and drive-thru pole dances — most were completely devastated by the shutdown.

“We went to ‘zero’ cash flow within a matter of weeks, coming from a period when business was doing extremely well,” said Ryan Carlson, the director of operations at Deja Vu Services Inc., a Las Vegas-based company that operates roughly 200 strip clubs in 40 states and six countries.

“From a business standpoint, this was devastating, not just due to the immediate lack of cash flow, but the inability to continue paying our teams that are the lifeblood of our business," he told FOX Business. "There is nothing worse than having to tell your employees that they have to fend for themselves for an indefinite amount of time.”

Entertainers suffered just as much because of sex worker discrimination by all levels of government, he said. In many cases, dancers were prohibited from participating in government aid programs.

In New York, the manager of NYC’s two FlashDancers locations estimated the loss of potential income to be somewhere in the “seven-figure range.” It would be worse, he said, if Flashdancers didn’t own the real estate that houses its clubs.

“We have had a tremendous amount of current, former and new applicants contacting us daily about reopening,” said Bob, who declined to provide his surname. “We have hundreds of employees who are eager to get back to work.”

The manager of the two FlashDancers locations in NYC says the clubs will undergo deep cleanings throughout the day, and guests will find hand sanitizing stations throughout the venues upon reopening. "We are considering temperature checks upon entran (FlashDancers)

Unlike New York’s clubs, however, some of Deja Vu’s locations in a handful of states, including California, Arizona, Texas and Florida, have been able to reopen, Carlson said. The management at those clubs is also “aggressively implementing enhanced safety procedures” one might expect at a theme park, including a requirement for masks of all employees, hourly deep-cleanings, new hand sanitizer dispensers and “strictly enforced social distancing” in high-traffic areas.

“While we do not require guests to wear masks, we strongly encourage that practice and do provide complimentary masks,” said Carlson, who added that some states require additional procedures, of which Deja Vu’s clubs “consistently comply.”

And yet, social-distancing protocol doesn’t extend to the clubs’ lap dances — at least not in states that have outright forbidden them via mandated COVID-19 guidelines.

A sign at the Little Darlings club in Las Vegas offers "coronavirus-free lap dances," which are performed by dancers who have been temperature-screened upon showing up to work.  (Deja Vu Services, Inc.)

“Lap dances will always exist until the end of time,” said Carlson, who said the practice “largely continues as normal” in states with no restrictions against it.

“The government cannot easily -- or rightfully -- prohibit two consenting individuals from engaging in a lawful business transaction,” he said.

To that end, one of Deja Vu’s clubs in Las Vegas, Little Darlings, is advertising “Coronavirus-Free Lap Dances” to lure customers, which, as Carlson explains, are just normal lap dances, albeit performed by dancers that have undergone temperature checks upon arriving at work. The club also jokingly teases “Nude Hand Sanitizer Wrestling” (performed in normal lubricant not in hand sanitizer), as part of its efforts to regain clientele.

Little Darlings also advertizes “Nude Hand Sanitizer Wrestling," although an executive for the company confirmed the event is performed in normal lube, although "it looks the same." (Deja Vu Services, Inc.)

Meanwhile, Bob with FlashDancers is hoping his dancers, too, will be able to perform lap dances once businesses are given the OK to resume, although he said it’s not his decision to make.

“It all depends on the NYC guidelines imposed,” said Bob, who confirmed that FlashDancers will abide by any new mandates, but would prefer to offer lap dances performed by mask-less dancers upon reopening. “We would rather do temperature checks upon entrance,” he said.

A dancer at the Lucky Devil Lounge in Portland, Oregon, is seen performing at the club's temporary "drive-thru experience" last month. (Reuters)

Despite the uncertainty, there may be good news for clubs facing the same rough road ahead. According to Carlson, “nearly every club” that Deja Vu reopened is doing just as well as they were pre-coronavirus, and two have broken their one-week sales records since welcoming back customers — and Carlson sees it as a testament to the industry’s safety standards.

“We endure greater scrutiny than virtually any other industry except medicine and banking, so you can expect that we will religiously follow all CDC guidelines and go above and beyond for our guests’ safety,” Carlson said. “Strippers are undoubtedly part of the fabric of American life, and have proven themselves recession-resistant time and time again.”