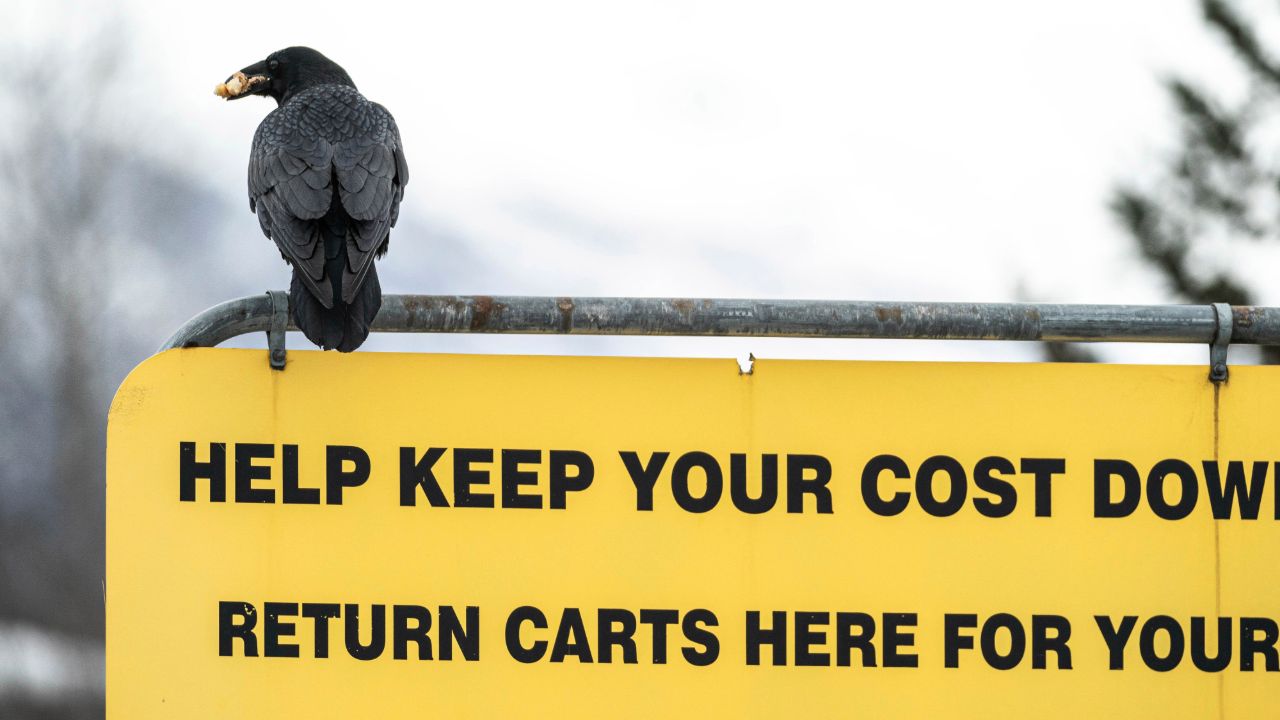 Some Alaska Costco shoppers said they've had their groceries stolen by ravens in the store parking lot.

Matt Lewallen said he was packing his groceries into his car in the parking lot of an Anchorage Costco when ravens swooped in to steal a short rib from his cart, the Anchorage Daily News reported Friday.

“I literally took 10 steps away and turned around, two ravens came down and instantly grabbed one out of the package, ripped it off and flew off with it,” Lewallen said.

Lewallen said the piece of meat was about 4-by-7 inches (10-by-18 centimeters) large — a sizable meal for a sizable bird.

“They know what they’re doing; it’s not their first time,” Lewallen said. “They’re very fat so I think they’ve got a whole system there.”

A raven investigates the contents of a shopping cart while another walks by on the ground in a Costco parking lot on Wednesday, March 24, 2021, in south Anchorage, Alaska. (Loren Holmes/Anchorage Daily News via AP)

And once he got back home, he noticed that one of the ravens had taken a poke at another rib but did not rob it.

“My parents were minding their business after a shop and made it home with one less steak!” Kimberly Waller wrote on Facebook. “The bird snatched it right out of the pack in the parking lot.”

Anchorage resident Tamara Josey replied to Waller’s post and referred to the ravens as “calculating." She said ravens hovered her in an attempt to steal her groceries.

“I had two ravens, one that was on the car next to me and he kept squawking really loud,” Josey said. “He would sit on the car and stare at me, then hop next to the bed of the truck on the other side, and he kept going back and forth. The other raven was on the ground. He kept trying to pull — I had those little mini-melons you have in the mesh baggies — he kept trying to grab the netting and pull my melons off the cart.”

A raven carries food in its beak as it sits atop a sign in a Costco parking lot on Wednesday, March 24, 2021, in south Anchorage, Alaska. (Loren Holmes/Anchorage Daily News via AP)

A raven started to fly in a circle around Josey until she got them to scram.

“They are very dedicated to their mission," she added.

A manager at an Anchorage Costco declined to comment to the newspaper about the raven thieves.

Rick Sinnott, a former wildlife biologist with the state Department of Fish and Game, said hundreds of ravens fly to Anchorage in the winter for food. After winter turns to spring, most of the ravens leave, Sinnott said.

But before they do, the ravens stick around to pluck assorted meats, fruits and vegetables.

“For years, decades, they’ve watched people in parking lots of grocery stores with all this food," Sinnott said. "They know what a piece of fruit looks like in a grocery cart because they’ve seen it on the ground or seen it in a garbage can.”