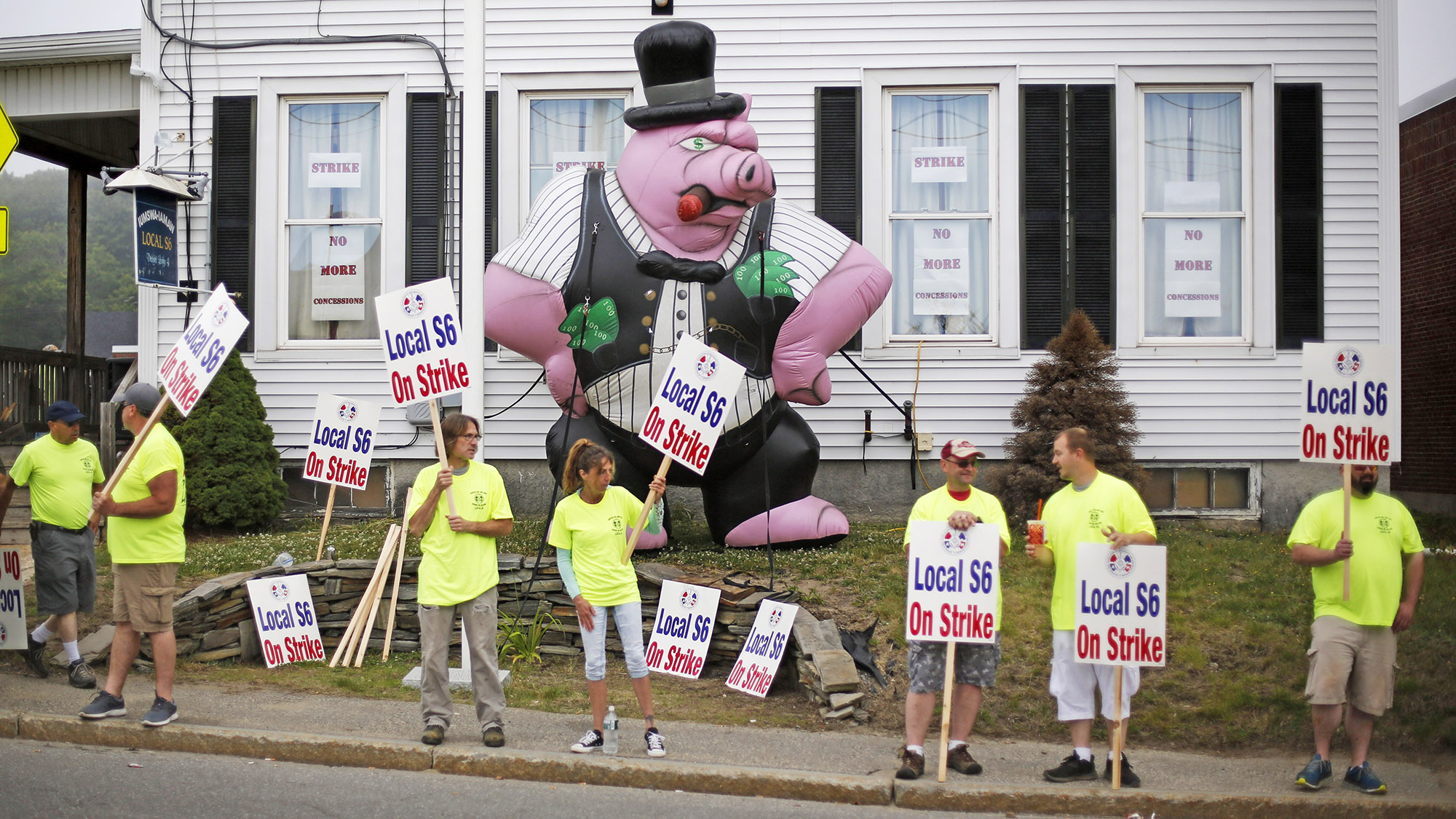 BATH, Maine — More than 4,000 shipbuilders went on strike against Bath Iron Works on Monday, disrupting production at one of Navy's biggest shipbuilders at a time of growing threats around the world.

Angry production workers voted overwhelmingly for the first strike in 20 years in a contract dispute that focused more on subcontracting, seniority and work rules than on wages and benefits.

“These are things that are meant to bust the union, and we can’t let that stand,” Mike Reaveley, an outside machinist, said Monday on the picket line. “It’s not really about the money.”

Workers wearing brightly colored T-shirts formed pickets at both of the shipyard entrances along the Kennebec River. On the back of the shirts were the words, “Union heroes walk picket lines.” The cacophony of cheering workers, honking horns and revving of Harley-Davidson motorcycle engines could be heard from blocks away.

The company's final three-year contract proposal would have given production workers a 3% raise each year. But the shipbuilders’ union objected to more than a dozen changes it considered to be concessions — especially the hiring of subcontractors.

Machinists Union Local S6, which represents 4,300 workers, presented a united front with 87% of shipbuilders voting in favor of a strike. The last strike, in 2000, lasted 55 days.

“That’s a rocking majority that thinks this is an unfair contract,” said John Cabral, a material handler in the yard.

The company said production was continuing with salaried personnel and others who reported to work. The company and union have not discussed returning to the bargaining table, spokesman David Hench said in an email.

Strikers picket outside the district lodge of Local 6 across from Bath Iron Works in Bath, Maine. (AP Photo/Robert F. Bukaty)

The strike threatens to put the shipyard further behind schedule on delivery of guided-missile destroyers to the Navy at a time of growing competition from China and Russia. Bath Iron Works was already six months behind, partly because of the coronavirus pandemic, officials said.

Frustration had been building among workers since the last contract in which the Machinists union accepted concessions that were deemed necessary to win a U.S. Coast Guard contract — and save shipbuilding jobs.

Bath Iron Works lost that contract to another shipyard in 2016. It also lost a competition for Navy frigates in late April.

Shipbuilders contend the problems have been caused by mismanagement. The company contends the shipyard must be more efficient and get back on schedule to successfully compete for work.

The shipyard hired 1,800 workers last year and expects to hire 1,000 workers this year, but subcontractors are still needed for the shipyard to get back on schedule, the company says.

Bath Iron Works is one of the Navy’s five largest shipbuilders and a major employer in Maine, with 6,800 workers.

The General Dynamics subsidiary has a backlog of a dozen destroyers to be built, but the shipyard is facing growing competition. Bath Iron Works competes directly against Mississippi’s larger Ingalls Shipbuilding for destroyers. Smaller shipyards in Alabama and Wisconsin are also competing for work on surface combatant warships.

At issue at Bath Iron Works is how much the shipyard can absorb and still remain competitive for future work, said Loren Thompson, a defense analyst at the Lexington Institute.

“Management is afraid that they’re going to price themselves out of the market,” Thompson said.

The pandemic made existing tensions worse.

The union called for a two-week closure of the shipyard and lawmakers urged the shipyard to do more to protect workers. But production continued through the pandemic with stringent protocols for disinfecting and distancing because the federal government classified the defense contractor as essential.

On Monday, few of the striking workers wore masks. So far, three workers tested positive for the coronavirus but all of them have since returned to work, the shipyard said.