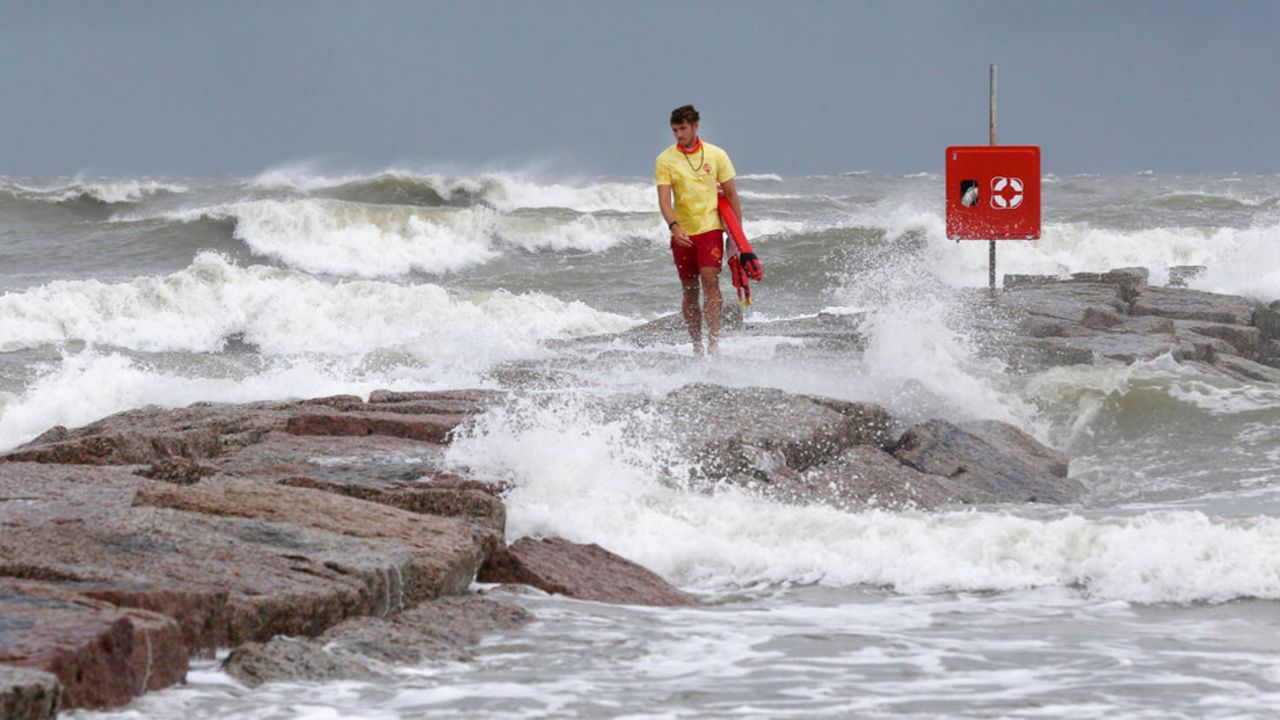 HOUSTON — Tropical Storm Hanna was upgraded to a hurricane Saturday, moving toward the Texas coast and threatening to bring heavy rain, storm surge and possible tornadoes to a part of the country trying to cope with a surge in coronavirus cases.

The storm, which is the first hurricane of the 2020 Atlantic hurricane season, was expected to make landfall Saturday afternoon or evening south of Corpus Christi, the U.S. National Hurricane Center said Saturday morning. It had maximum sustained winds of 80 mph (129 kph) and was centered about 85 miles (137 kilometers) southeast of Corpus Christi and was moving west at 7 mph (11 kph).

Many parts of Texas, including the area where Hanna is expected to come ashore, have been dealing with a spike in coronavirus cases in recent weeks, but local officials said they were prepared for whatever the storm may bring.

“And don’t feel like since we’ve been fighting COVID for five months, that we’re out of energy or we’re out of gas. We’re not,” Corpus Christi Mayor Joe McComb said Friday. “We can do these two things together and we’re going to win both of them.”

Corpus Christi is in Nueces County, where health officials made headlines when they revealed that 60 infants tested positive for COVID-19 from July 1 to July 16.

Farther south in Cameron County, which borders Mexico, more than 300 confirmed new cases have been reported almost daily for the past two weeks, according to state health figures. The past week has also been the county’s deadliest of the pandemic.

Cameron County Judge Eddie Treviño, the county’s top elected official, said he was awaiting word Friday of whether hotels would be used to house recovering COVID-19 patients in order to free up hospital beds.

“If there’s any benefit to be gained from this, it’s that people have to stay at home for a weekend,” Treviño said.

Officials reminded residents to wear masks if they needed to get supplies before the storm arrives or if they have to shelter with neighbors because of flooding.

The main hazard from Hanna was expected to be flash flooding, Chris Birchfield, a meteorologist with the National Weather Service in Brownsville, said Friday. Forecasters said Hanna could bring 6 to 12 inches (15 to 30 centimeters) of rain through Sunday night — with isolated totals of 18 inches (46 centimeters) — in addition to coastal swells that could cause life-threatening surf and rip current conditions.

Coastal states scrambled this spring to adjust emergency hurricane plans to account for the virus, and Hanna loomed as the first big test.

South Texas officials’ plans for any possible rescues, shelters and monitoring of the storm will have the pandemic in mind. Gov. Greg Abbott said various resources to respond to the storm were on standby across the state, including search-and-rescue teams and aircraft.

Treviño said shelters would keep families socially distanced if any need to evacuate their homes.

In the Mexican city of Matamoros, located across the border from Brownsville, volunteers worried whether the tropical storm would affect a makeshift migrant camp near the Rio Grande where about 1,300 asylum seekers, including newborn babies and elderly residents, are waiting under the U.S. immigration policy informally known as “Remain in Mexico.”

Erin Hughes, a volunteer at the camp who is a civil engineer from Philadelphia, said tropical storms pose a devastating threat since the camp is located on a floodplain, and that she and others were monitoring the river’s water level.

As of Saturday morning, there was a storm surge warning in effect for a stretch of coast south of Corpus Christi from Baffin Bay to Port Mansfield. Storm surge up to 5 feet (1.5 meters) was forecast for that area. People were advised to protect life and property from high water.

Tornadoes were also possible Saturday for parts of the lower to middle Texas coastal plain, forecasters said Friday. A hurricane warning remained in effect for Port Mansfield to Mesquite Bay, which is north of Corpus Christi, and a tropical storm warning was in effect from Port Mansfield south to Barra el Mezquital, Mexico, and from Mesquite Bay north to High Island, Texas.

Forecasters said Hanna could bring 6 to 12 inches (15 to 30 centimeters) of rain through Sunday night — with isolated totals of 18 inches (46 centimeters) — in addition to coastal swells that could cause life-threatening surf and rip current conditions.

Gonzalo is forecast to bring 1 to 3 inches (3 to 8 centimeters) of rain, with isolated totals of 5 inches (13 centimeters). A tropical storm warning was in effect for Tobago and Grenada and its dependencies. The storm was expected to dissipate by Sunday night or Monday, forecasters said.

Gonzalo and Hanna broke the record for the earliest seventh and eighth Atlantic named storms, respectively, according to Colorado State University hurricane researcher Phil Klotzbach. The previous records were Gert on July 24, 2005, and Harvey on Aug. 3, 2005, Klotzbach said.

Cristobal, Danielle, Edouard and Fay also set records for being the earliest named Atlantic storm for their alphabetic order.