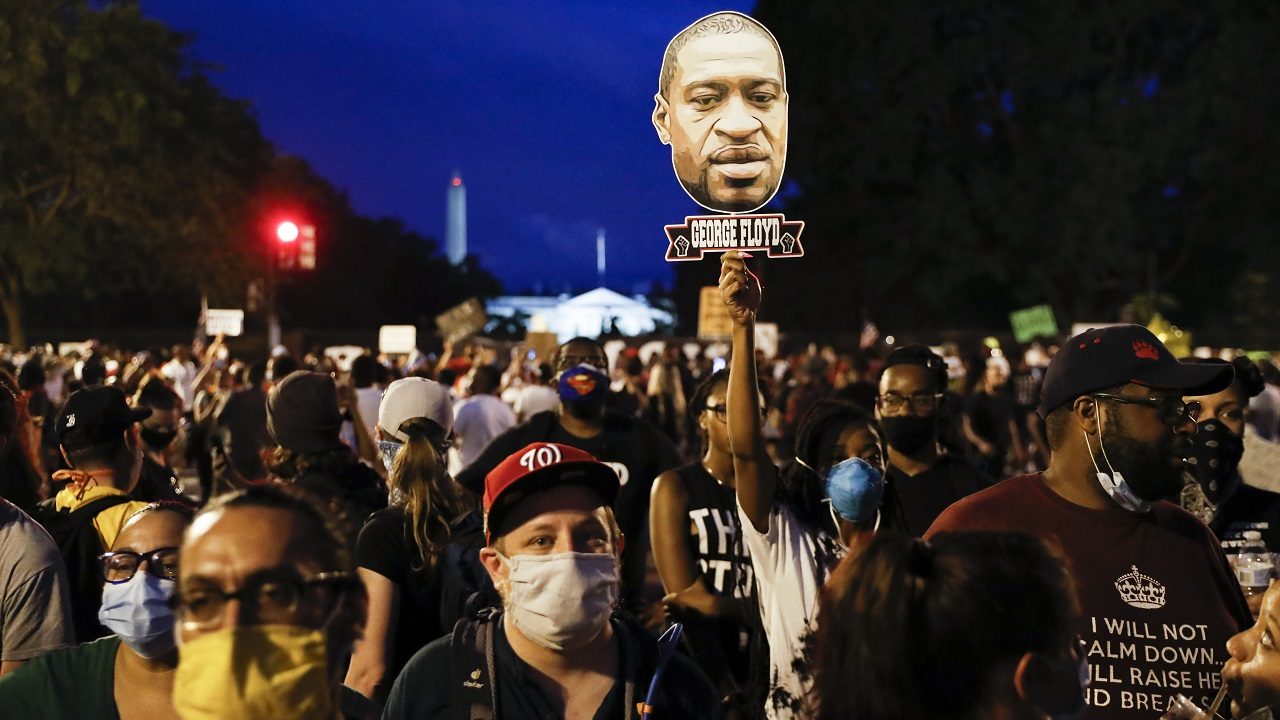 WASHINGTON (AP) — Massive protests against police brutality nationwide capped a week that began in chaos but ended with largely peaceful expressions that organizers hope will sustain their movement.

Saturday's marches featured few reports of problems in scenes that were more often festive than tense. Authorities were not quick to release crowd size estimates, but it was clear tens of thousands of people — and perhaps hundreds of thousands — turned out nationally.

Wearing masks and urging fundamental change, protesters gathered in dozens of places from coast to coast while mourners in North Carolina waited for hours to glimpse the golden coffin carrying the body of native son George Floyd, the black man whose death at the hands of Minneapolis police has galvanized the expanding movement.

Demonstrators protest Saturday, June 6, 2020, near the White House in Washington, over the death of George Floyd, a black man who was in police custody in Minneapolis. Floyd died after being restrained by Minneapolis police officers. (AP Photo/Jacquelyn Martin)

Collectively, it was perhaps the largest one-day mobilization since Floyd died May 25 and came as many cities lifted curfews imposed following initial spasms of arson, assaults and smash-and-grab raids on businesses. Authorities have softened restrictions as the number of arrests plummeted.

Demonstrations also reached four other continents, ending in clashes in London and Marseille, France. In the U.S., Seattle police used flash bang devices and pepper spray to disperse protesters hurling rocks, bottles and what authorities said were "improvised explosives" that had injured officers, just a day after city leaders temporarily banned one kind of tear gas. Around midnight in Portland, a firework was thrown over the fence at the Justice Center, injuring a Multnomah County deputy, Portland police Lt. Tina Jones said. Smith said police had declare an unlawful assembly and were making arrests.

The largest U.S. demonstration appeared to be in Washington, where protesters flooded streets closed to traffic. On a hot, humid day, they gathered at the Capitol, on the National Mall and in neighborhoods. Some turned intersections into dance floors. Tents offered snacks and water.  Pamela Reynolds said she came seeking greater police accountability.

"The laws are protecting them," said the 37-year-old African American teacher. The changes she wants include a federal ban on police chokeholds and a requirement that officers wear body cameras.

Members of the Austin Police Department kneel in front of demonstrators who gathered in Austin, Texas, Saturday, June 6, 2020, to protest the death of George Floyd, a black man who was in police custody in Minneapolis. Floyd died after being restrained by Minneapolis police officers on Memorial Day. (AP Photo/Eric Gay)

At the White House, which was fortified with new fencing and extra security measures, chants and cheers were heard in waves. President Donald Trump, who has urged authorities to crack down on unrest, downplayed the demonstration, tweeting: "Much smaller crowd in D.C. than anticipated."

Elsewhere, the backdrops included some of the nation's most famous landmarks. Peaceful marchers mingled with motorists as they crossed the Golden Gate Bridge in San Francisco. Cars had been cleared from the Brooklyn Bridge as protesters streamed into Manhattan on a day that New York police relaxed enforcement of a curfew that has led to confrontations. They walked the boulevards of Hollywood and a Nashville, Tennessee, street famous for country music-themed bars and restaurants.

NFL ENCOURAGES PLAYERS TO 'PEACEFULLY PROTEST,' SAYS 'WE WERE WRONG' NOT TO LISTEN SOONER

Many protesters wore masks — a reminder of the danger that the protests could exacerbate the spread of the coronavirus.

"We've had discussions in our family and among friends that nothing is going to change until our white brothers and sisters voice their opinion," said Sweeney, 49.

A large crowd of Seattle medical workers, many in lab coats and scrubs, marched to City Hall, holding signs reading, "Police violence and racism are a public health emergency" and "Nurses kneel with you, not on you" — a reference to how a white officer pressed his knee on Floyd's neck for several minutes.

Atop a parking garage in downtown Atlanta, a group of black college band alumni serenaded protesters with a tuba-heavy mix of tunes. Standing within earshot, business owner Leah Aforkor Quaye said it was her first time hitting the streets.

"This makes people so uncomfortable, but the only way things are happening is if we make people uncomfortable," said Quaye, who is black.

In Raeford, North Carolina, a town near Floyd's birthplace, people lined up outside a Free Will Baptist church, waiting to enter in small groups. At a private memorial service, mourners sang along with a choir. A large photo of Floyd and a portrait of him adorned with an angel's wings and halo were displayed at the front of the chapel.

"It could have been me. It could have been my brother, my father, any of my friends who are black," said Erik Carlos of nearby Fayetteville. "It made me feel very vulnerable at first." Floyd's body will go to Houston, where he lived before Minneapolis, for another memorial in the coming days.

Protesters and their supporters in public office say they're determined to turn the outpouring into change, notably overhauling policing policies. Many marchers urged officials to "defund the police."

Theresa Bland, 68, a retired teacher and real estate agent protesting at the Ohio Statehouse in Columbus, envisioned a broader agenda.

Congressional Democrats are preparing a sweeping package of police reforms, which is expected to include changes to immunity provisions and creating a database of use-of-force incidents. Revamped training requirements are planned, too — among them, a ban on chokeholds.

The prospects of reforms clearing a divided Congress are unclear.

Back in North Carolina, the Rev. Christopher Stackhouse recounted the circumstances of Floyd's death for the congregation.

"It took 8 minutes and 46 seconds for him to die," Stackhouse said at the memorial service. "But it took 401 years to put the system in place so nothing would happen."