Boston-based chef Chris Coombs stared his career in culinary as a dish washer when he was just 11-years-old at a local seafood restaurant on the North Shore.

After graduating from The Culinary Institute of America and working in kitchens around Mass., and in Virginia, Coombs saved up enough of his own money to open up his frist modern French American restaurant, Deuxave, in Boston in 2010. His cooking skills landed him on Food Network's reality cooking series "Chopped."

Coombs told FOX Business how he raised funding to scale his small business into a restaurant group.

FOX Business: How much of your own money did you invest in your small business?

Coombs:  Each time we have opened a restaurant, it has been very challenging to finance. The only way to do it is to be all in. I grew up with very little, so I just assume that one day I will go back to having very little. Sometimes it keeps me awake at night wondering how I will lose it all, but that also keeps me hungry to work as hard as I can. During the recession, I put every dollar I had towards Deuxave, admittedly, it wasn’t very much. But also, I was the benefactor of a subprime mortgage when I was 22.  When I had $3,000 in my bank account, a now defunct lender allowed me to purchase a $295,000, zero money down, condo in Dorchester. Luckily, I had a roommate who contributed. In 2009, feeling rather under water on my 2006 purchase, we applied for a small business loan, I had no problem offering up my condo as collateral. If Deuxave didn’t work out, which thank God it did, not only would I have been bankrupt, but I also would not have had a place to live.

Coombs: Growth can be exciting, but also in the restaurant business, it can be very scary. What defines Boston Urban Hospitality is not just our restaurants, but also the restaurant opportunities that we have passed on. In this Amazon era, there is no shortage of landlords with compelling stories of how their development will be a smashing success. I personally have always passed on kool-aid; our cautious approach to growth has thus far saved us from missteps in an industry that is notorious for them. I like to consider our company to be slow growth, but calculated. Even with sales going well over 10 times in the last decade, we have only opened restaurants in 2005, 2010, 2013, and 2018. I believe that this pace allows us to focus on the integrity of our product and the quality of our experiences at our diverse concepts. It also allows us to build and grow our team before expanding our top line. Taking our time allows us to fine tune our experiences, and evolve with the needs of our guests.

FOX Business: What was the biggest road block or challenge you faced?

Coombs: In the early days, the biggest barrier to entry was access to capital. For a kid from Peabody, Mass. with an associates degree from the Culinary Institute of America, it was just a dream. Learning about raising equity in various ways was perhaps the most challenging piece. Originally, my thought process about money was entirely wrong, I just believed that if we served a great product, that people would want to buy it, and the money would work itself out if I controlled my costs. Sounds simple doesn’t it? The most recent lessons have been about controlling the costs that are not directly in my control. For example, on our most recent growth Boston Chops Downtown, our construction costs far exceeded budget, and took two to three times longer than expected to build, while paying rent for a very large space. You can have the best product in the world, but if you are not open to generate revenue, it doesn’t matter. 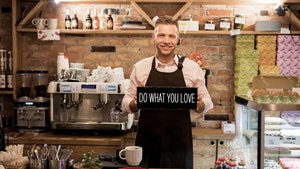 Stephen Schwarzman, chairman, CEO and co-founder of the largest alternative investment firm in the world Blackstone, has determined three basic tests for people to go through before they try to start a business.

FOX Business: What are plans for growth now?

Coombs: On the Boston Urban Hospitality side, we are always eyes wide open for expansion opportunities that fall within our metrics. However, we feel as if Boston might be in a bit of a restaurant bubble, I want to make sure that we have some dry powder to deploy if the bubble bursts. We are also interested in expanding to become a more diverse company, perhaps a licensing deal with a hotel partner. Additionally, we are considering expansion into other markets which would be a large step for a company that thus far only operates in Boston Proper.

What advice do you have for others starting a small business?

There is no substitute in life for hard work. Throughout my career I don’t believe I have ever been seen as the most talented chef around, however I have been willing to dedicate my entire life to my craft. If you are not willing to go all in, then perhaps it is better to seek out a part time hobby. When I accepted my first executive chef job at 22-years-old, I was vastly underqualified to take the position. I learned about hard work from my father, so in my first year at dbar, I only took 17 days off, and most days I came in at 8 or 9 in the morning and worked till 11 or 12 at night. Because that was what it took, and I wanted it really bad. I wanted to be the best, I wanted people to notice, I wanted people to know who chef Chris Coombs was. Those early days were important, not just for figuring out and experimenting with cuisine, but using my old CIA textbooks and various other books for reference to answer things about the business side that I was unclear on, particularly in cost controls and accounting. You would be surprised what you can achieve when you go all in.