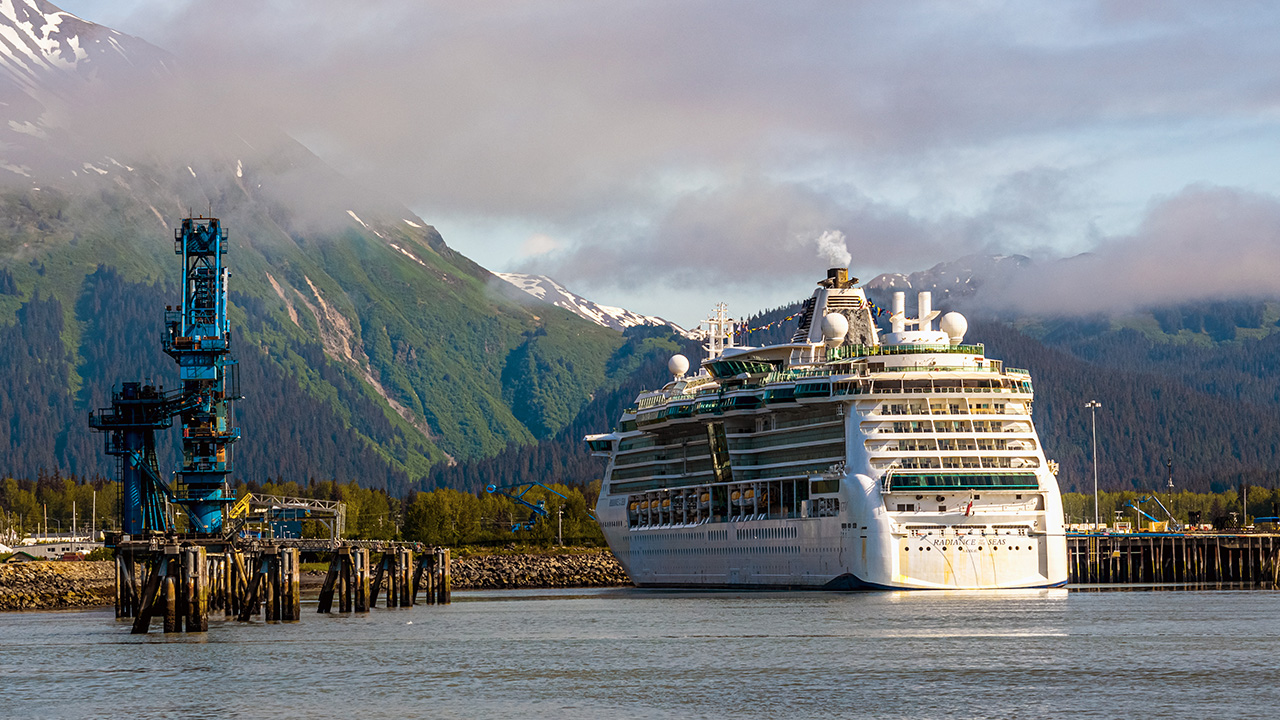 FOX Business' Connell McShane reports even with the new CDC guidelines regarding cruises, it appears Alaska 'is headed for yet another tough economic summer.'

SEWARD, Alaska – Nestled between the mountains and the northern Pacific Ocean, the Alaskan port city of Seward is the first stop for many tourists. This is where the giant cruise ships dock – or rather docked – before the COVID-19 pandemic shut down the industry more than a year ago.

The Kenai Peninsula --where Seward is located – according to Terry had the largest drop in sales tax revenue in the state last year. This year was supposed to be different – it was supposed to be a comeback for Alaska’s $4.5 billion tourism industry.

Unfortunately for so many small business owners in Alaska, who rely on cruise traffic for a large chunk of their sales, the rebound might not come in 2021. An obscure 19th-century law known as the Passenger Vessel Services Act of 1886, or PVSA, prevents foreign-flagged ships from traveling directly between two U.S. ports. It’s designed to protect domestic shipbuilders. The large cruise operators normally register their vessels offshore for economic reasons, so they are subject to the restriction.

The Radiance of the Seas, a Royal Caribbean cruise ship, docked in Seward Alaska on June 7, 2019. (iStock)

The workaround is usually quite simple. The ships make a quick stop in Canada on their way from Seattle to Seward, and the requirement is met. The Canadian ports, however, remain closed because of coronavirus restrictions, so the industry is effectively shut down in Alaska.

Republican Senator Lisa Murkowski of Alaska is trying to fix the problem – at least in the short term. Murkowski said she’s not in favor of scrapping the PVSA, but she has proposed a bill in Congress that would grant ships a waiver.

"Let’s get a waiver," Murkowski told FOX Business. "Let’s get a temporary waiver that will hopefully give enough time for the industry to send a few ships north with passengers so that we can have some semblance of a season."

As of this writing, Murkowski’s legislation has not advanced in Washington.

Time is of the essence. As Murkowski noted, the tourist season in Alaska is short and sweet. If action doesn’t come soon, the impact of a second lost season could be economically devastating.

The impact of the cruise shutdown stretches far beyond port towns like Seward. FOX Business drove more than 200 miles inland to the village of Talkeetna, visiting with K-2 Aviation, a company that provides stunning aviation tours of Denali National Park.

"I would say this is one of the bigger challenges of my life to manage this because nothing was clear," said Suzanne Rust, K-2’s owner for the last 25 years. She’s been frustrated by the delay in issuing guidance from the Centers for Disease Control and Prevention.

The latest CDC update was announced on Wednesday, providing a pathway for cruise ships to operate again in the U.S. as early as July. However, the Alaskan cruise industry still has its Canada problem, and until that’s solved, the local business community in the state will continue to suffer.