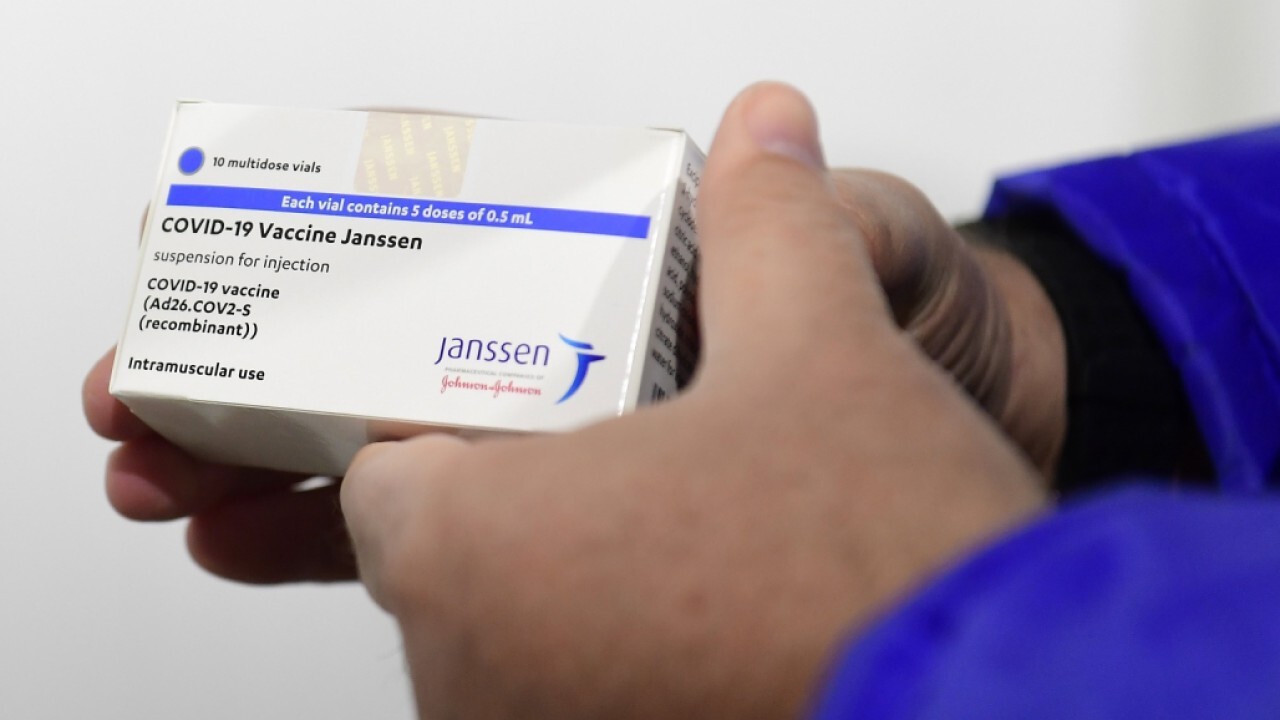 Former FDA associate commissioner Peter Pitts weighs in on the pause of the Johnson & Johnson vaccine across the country.

U.S. health authorities came close to simply warning about a blood-clotting risk from Johnson & Johnson's Covid-19 vaccine, but decided to recommend pausing use out of concern doctors would improperly treat the condition, people familiar with the matter said.

Over the previous four weeks, American health officials had become alarmed about similar blood-clotting conditions in Europe involving a Covid-19 vaccine from AstraZeneca PLC, the people said. The officials dug into a U.S. vaccine safety database and identified the cases of great concern, but debated what action to take.

By last Monday night, the officials resolved that urgent action was needed, the people said. Four of six women in the U.S. who developed the blood clots days after vaccination had initially been given heparin, according to the U.S. Centers for Disease Control and Prevention. Its use could have worsened the patients' condition, the people said.

That night, the country's top health officials agreed during a one-hour Zoom meeting to take the strongest step: publicly recommend pausing the vaccine's use while probing the adverse-event cases, the people said.

Since the announcement, the Food and Drug Administration has been studying other reports of additional blood-clotting cases among people who received J&J's vaccine, but hasn't confirmed whether any reflect the same phenomenon, the people said. Yet officials are growing more persuaded, the people added, that the six total cases reported so far are related to the shot.

FDA officials are waiting to see what a vaccine advisory panel to the CDC recommends, the people said. The two most likely options are restricting the shot to an age group such as men and women over 50 years, or allowing a return to widespread use but with added a warning about the benefits and risks of the shot.

The CDC panel, called the Advisory Committee on Immunization Practices, is scheduled to meet Friday to review the pause, after putting off a vote on how to proceed during an emergency meeting last week.

Anthony Fauci, President Biden's chief medical adviser, said he expects J&J's vaccine to return to use in the U.S. by Friday. "I believe we'll be back with some sort of indication a little bit different from before the pause," Dr. Fauci said on ABC.

Among the more than seven million people in the U.S. given J&J's Covid-19 vaccine before the pause, the total of six were reported to have developed cerebral-vein blood clots and also registered low counts of the colorless cells in the blood known as platelets that help the blood to clot.

J&J has said it is aware of the blood-clot cases and working with health authorities. Company researchers recently sent a letter to a medical journal saying there wasn't evidence to establish a connection between the vaccine and the adverse events so far.

The recommended pause disrupted a mass vaccination campaign that is racing to inoculate as many people as possible before coronavirus variants emerge that could render vaccines less effective. The campaign had been picking up steam partly due to the launch of J&J's vaccine, which is easier to store and requires only one dose.

After the announcement last Tuesday morning, states, cities and communities were forced either to cancel appointments for vaccinations with J&J's shot or to find doses of the alternatives to give.

The FDA and CDC drew criticism from some health experts afraid the agencies' joint recommendation would exacerbate fears among those already hesitant to get vaccinated and set back a push to develop the communitywide immunity needed to stop the virus from spreading.

The officials, along with Peter Marks, the FDA's vaccines chief, decided that caution and safety should take precedence, the people said.

"It is imperative for healthcare workers to know that the treatment of these clots is different than our current standard of care," Dr. Walensky said during a White House briefing last week.

Helping the decision making, the people said, were two sources for reports about the rare adverse events.

One source, the people said, was health regulators in Europe. They had been looking into reports of unusual clotting cases involving another vaccine, from AstraZeneca and the University of Oxford.

The AstraZeneca-Oxford vaccine is based on a similar technology as J&J's. Both viral-vector vaccines use a modified common-cold virus to carry genetic instructions that teach a human cell to make a version of the spike protein found on the surface of the Covid-19 virus. A vaccine recipient's body then reacts to the spikes and forms immunity to Covid-19 infection.

In March, health authorities in several countries on the continent restricted use of the AstraZeneca-Oxford shot to investigate clotting cases. This month, European medicine regulators extended their probe to J&J's Covid-19 vaccine.

Dr. Marks, director of the FDA center that regulates vaccines, and colleagues grew intrigued about the risk of blood clots over the past month. Cases in Europe related to the vaccine developed by AstraZeneca and the University of Oxford were accumulating, the people said.

FDA staffers became concerned the phenomenon also might be related to J&J's vaccine already in use in the U.S., the people said.

The J&J reports came from the other source of blood-clot cases: the Vaccine Adverse Event Reporting System. Doctors and the public report safety issues to the three-decade-old database. The people filing reports don't know whether the events are truly vaccine-related, but the FDA and CDC investigate these.

The first report of a blood-clot case in a person who got the J&J vaccine was filed March 19, the people said. By April 9, the two agencies had pulled from the VAERS database several other similar cases. FDA and CDC officials began suspecting J&J's shot played a role, the people said.

Over the weekend of April 10 and 11, Dr. Marks and CDC's Dr. Walensky sifted through the reports case by case.

By last Monday, VAERS had six reports, all involving women. One had died, while others were or had been in intensive care.

The federal health officials worried the risk of clots might be significantly greater than initially suspected, if the problem was really focused just on younger women, one person said. About 1.5 million women between the ages of 18 and 50 years had gotten J&J's vaccine by that time, according to the CDC.

Given the blood-clot cases involving people who got the AstraZeneca-Oxford vaccine, the U.S. health officials also worried about a "class effect" involving viral-vector vaccines, the people said.

"We better let the Secretary know," one of the health officials said, according to a person familiar with the matter.

At 8 p.m. last Monday, Health Secretary Becerra joined other senior health officials in a Zoom meeting to discuss what to do, the people said.

After a clinical review of the cases, participants in the meeting discussed potential responses. One option was to warn doctors against using heparin, one of the people said, since heparin was often given to clotting patients.

Four of the six women were initially treated with heparin, according to data the CDC and J&J later presented to the ACIP, the agency's vaccine advisory panel.

In one case, doctors administered the medication to a 48-year-old woman after finding extensive blood clots in veins in her brain and abdominal cavity, along with an alarmingly low count of platelets in her blood.

Despite the heparin, blood clots continued to form, according to an account J&J presented to the ACIP and a description of the case in the New England Journal of Medicine.

The woman was switched to another blood thinner called argatroban, along with intravenous immune globulin, according to the J&J and NEJM accounts. Her platelet count improved substantially over the next five days, but she remained critically ill early last week. She had been vaccinated two weeks before developing symptoms.

Discussion shifted to recommending a pause in use, one of the people said, after participants discussed whether simply adding a warning might trigger calls for stronger action. One concern: the ACIP might convene and counsel such action while the cases were probed further.

The group quickly agreed that if there was going to be a push for a pause in a few days, it would be safer to do so immediately to avoid possible new clotting cases, one of the people said. Such drastic action would also attract the kind of public attention that could prompt reporting of any other blood-clot cases.

Participants regretted the announcement, to be made at 7 a.m. the next morning, wouldn't leave time for fully notifying state health authorities, the people said.

Yet it would mean people scheduled to get vaccinated that day, especially those in the Eastern time zone, would know beforehand, rather than learning the news while waiting in line for a shot.