Everyone wants a pair of pearly whites.

A fair amount of people also want straightened and gap-free teeth as well. It’s a big reason why the American Association of Orthodontists has noted that one in five orthodontic patients is an adult, according to report from Harvard Health Publishing.

The shift toward serving an older patient base has led to growth in the industry too.

The orthodontist industry was estimated to rake in $12 billion in 2018 based on market analysis conducted by research firm IBISWorld. Moreover, their report concluded that the industry grew 1.3 percent annually from 2013 to 2018 – most of which was credited to the rise of braces.

He added: “Your confidence level, how people judge you, when you go for a job interview, when you have social situations, when you are dating – your smile says a lot about you.”

Andrea Palmentiero, who has shelled out over $5,000 to achieve her dream smile in time for her wedding next year, agrees.

“We are in an era now when everyone is judged on their smile, and [nearly] everyone has beautiful teeth. When I was growing up, it felt like everyone had braces. I was very, very jealous even then,” Palmentiero said regarding her decision to get braces as an adult.

Like many people who seek braces, Palmentiero cited thumb sucking from her youth as the culprit as the culprit for her misalignment. A major life event like a wedding, which often has all eyes on the bride, was the push she needed to see a professional about her teeth.

However, unlike Palmentiero’s situation, experts say that many adults who are getting braces done now actually went through the process at least once before in their youth. More often than not, failing to wear a retainer for the recommended time is a major reason why people readdress their teeth’s position.

A study from 2017 even cited some millennials feeling as if bad teeth hinder their ability to secure a job.

“People harken back to that former smile. We have many new patients who scroll through their phone looking back at old school photos to show me at their initial consultation, and they say, ‘That’s how I want it to look again,’” Dr. Adam Goodman, DMD of Goodman Orthodontics revealed to FOX Business in an effort to illustrate why adults are willing to subject themselves to the costly and sometimes painful procedure yet again.

Another factor that plays a role in adults choosing to get braces is the ease of financing – whether it be through a payment plan offered at a doctor’s office or through a specialized medical credit cards with zero interest promotions.

Adults also get a wider selection of dental hardware than they did a few years ago.

According to the professionals at Oral-B, there are traditional metal braces, some of which can have colorful bands for personal expression, and then there are ceramic braces that can match the appearance of natural teeth or lingual braces that are out of sight can sit behind teeth. Newly designed heat-activated archwires are said to “help teeth move more quickly and less painfully than in the past” via body heat.

For a select few, gold braces are a fashion-forward statement that costs a pretty penny, according to Colgate.

Possibly one of the most popular aligner options are the ones you can't see. Invisalign, which was founded in 1997, has been a leader in the pack when it comes to clear braces. The process involves an in-office consultation with an orthodontist who is certified to administer the Invisalign treatment as well as a personalized treatment plan and customized invisible aligners that move teeth at a quarter of a millimeter every two weeks.

Throughout the treatment, an orthodontist will check in on the patient’s progress and be able to address any unexpected issues along the way.

Though it may be considered popular, not every company has gotten a smile from investors.

Invisalign’s competitor, Smile Direct Club, has been the leading teledentistry company since its founding in 2014. Its low-cost, direct-to-consumer business model has made Smile Direct Club a go-to for adults who want to fix their teeth without having to shell out thousands. According to Smile Direct Club’s website, its clear aligners cost a flat $1,895 while Invisalign and metal braces can range between $3,000 and $7,000 depending on the condition of one’s teeth. 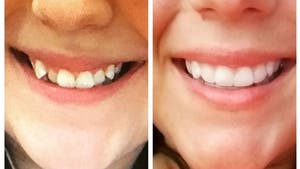 The online dentistry startup is now a public company.

As the trendy option, Smile Direct Club appeared to have a promising IPO with a partnership with CVS and Aetna Dental announced back in April. However, since going public last month, Smile Direct Club’s stock has plummeted by 60 percent and has been dubbed one of the worst-performing IPOs of the year by some.

It’s unclear whether ongoing legal battles have played a role in Smile Direct Club’s tanking stocks, but this disrupter has earned the ire of dental professionals around the country.

“Smile Direct took the concept of Invisalign and streamlined it so that teeth could be moved in a similar fashion but without having to ever see an orthodontist, doing the process at home, for a reduced fee,” Goodman said. “I will state from the outset that even without a patient seeing an orthodontist for an initial examination or having the treatment monitored as it unfolds, a Smile Direct treatment can certainly be successful.”

“Where most dentists and orthodontists agree is that there are instances where, despite a patient avowing that their mouth is healthy and that they have had a recent exam, a percentage of Smile Direct patients have either decayed fragile teeth or weakened, diseased gums, and orthodontic treatment on such patients can lead to irreversible and catastrophic damage.”

He also likened the direct-to-consumer impression kits Smile Direct Club provides to that of a do-it-yourself cast mold for broken bones – something that doesn’t exist in the medical field and would certainly cause an uproar with doctors.

When it comes down to which is more effective, Magid said that metal braces can achieve feats that invisible ones can’t.

In his own words, “You can get better control and faster movement with classic bracket and wire braces than any form of clear aligner therapy.”

Though it's still no secret that adults for the most part don’t want to wear metal braces for aesthetic reasons, which gives invisible aligners an advantage in the market.

Magid stressed that orthodontics is all about the diagnosis, planning and execution –which is why he advises people to stay away from Smile Direct Club. With X-rays and close examinations, he said orthodontists can find the root cause of teeth positioning and strategize movement mid-way. This isn’t possible with Smile Direct Club because the company sends all the aligners at once.

Outside of what the professionals say, consumers have made their experience known with reviews on healthcare marketplace RealSelf. On the site, 59 percent reported Smile Direct Club as “Worth It” while standard braces and Invisalign are at 91 percent.

Despite this, teledentistry brands continue to pop up to meet the market’s demand for perfect teeth sans metal. Candid Co., SmileLove and SnapCorrect are a few among many who are vying for a cut of those cosmetic dollars.

Other adults have opted for DIY methods like using orthodontic rubber bands for closing gaps and floss for straightening crooked teeth based off of results seen in varied online forums.

Both Magid and Goodman agreed these practices can yield terrible results that may loosen, misalign and even cause tooth loss. In short, any procedure that’s administered on teeth should be done by a dental professional.

As for Palmentiero, she is happy with her choice in adult braces. For anyone who is considering it as well, her advice is the following: “I’m a firm believer in continually bettering yourself. There is no age limit. If this is something that has been on your mind for a long time, just do it. Life is too short to not make yourself feel good.”