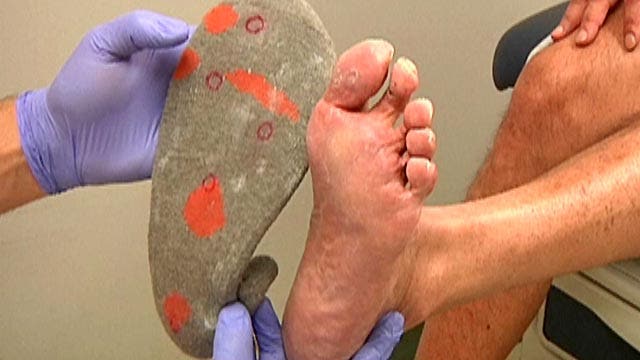 The Center for Disease Control and Prevention reports someone loses a limb from diabetic complications every 20 seconds.

Diabetes causes a loss of sensation, leaving ulcers to go unnoticed and become infected. If not treated soon enough, the limb has to be amputated.

But doctors at the University of Arizona Medical Center, in Tucson, Arizona, have found a way to prevent the development of these ulcers, and it's as simple as putting on a pair of socks.

'Smart Socks' use fiber optics and sensors to monitor pressures in the patient's feet.

"These Smart Sox were designed to identify both locations of the foot and ranges of motion that could be problematic. We can then get information to can give us a warning sign of hotspots, which cause complications" said Dr. Bijan Najafi of The University of Arizona Medical Center.

Foot ulcers affect many of the nearly 26 million people in the US suffering from diabetes.

"It's among the most common reasons that someone with diabetes will be admitted to the hospital; not the heart attack, not the stroke, not the high blood sugar, but a foot problem," said Dr. David Armstrong.

Dr. Armstrong heads the University's Southern Arizona Limb Salvage Alliance, an organization dedicated to preventing amputations in diabetes patients. His patients are especially grateful for the advancements made by the group.

Donna Flinz suffers from neuropathy, and has lost all sensation in her feet.

"I have no idea what's going on down there. I could cut myself easily, I could jab myself with a stone. There's just so much going on down there that I don't know because my nerve endings are basically destroyed. So the socks will do that for me. It tells me what my feet should've told me," said Flinz

Patient Carlos Davila is a flight attendant, and works on his feet for hours each week. He is worried about the possibility of diabetic foot ulcers.

"My father and my brother both lost legs to diabetes so I try to keep a real close eye on it, " said Davila.

The socks came to light through the medical expertise of Dr. Armstrong, and the engineering expertise of Dr. Najafi. They believe the socks are just the beginning of a new future in disease prevention.

"We're starting to see medical tech and consumer tech merge. And this year, it's been happening more than any other year in our existence," said Dr. Armstrong.

The study is funded by the Qatar National Research Fund, which donated more than $2 million in grants to the University.

Researchers expect Smart Socks to be available to the public by 2019.