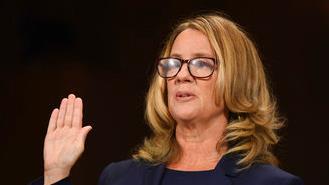 Ford: My family and I have received death threats

Christine Blasey Ford says she’s been the target of constant harassment and death threats during her testimony on Brett Kavanaugh sexual assault allegations.

President Trump said the media scrutiny surrounding Judge Brett Kavanaugh’s Supreme Court nomination on whether he sexually assaulted a girl in high school is not only taking down “one of the highest quality people he has ever met,” but the “circus” will no doubt impede future federal judge hiring.

During a press conference in New York on Wednesday, Trump said that he had more than 140 judges waiting in the wings for the prestigious positions of not only being a Supreme Court justice but also a federal circuit and district judge. However, since the Kavanaugh allegations, he says a majority have likely been “scared” off.

“People are going to be scared because we could say it about you 35 years ago,” Trump said, referring to the now-multiple allegations against Kavanaugh during his high school and college days.

He said prior to this “high level CON GAME” being played out by the media and Democrats alike, everybody aspired to be a federal judge.

Jenn Ellis, a constitutional law attorney and former prosecutor in Colorado, said Trump is “right to be concerned about his future nominees."

“If we allow uncorroborated, unsubstantiated allegations to derail the confirmation of an otherwise impeccably credentialed judge, we as a country are expressing to all future potential candidates they will be presumptively deemed unfit to serve,” Ellis, who also serves as the director of public policy for the James Dobson Family Institute, told FOX Business.

Kavanaugh’s main accuser, Christine Blasey Ford, however, testified before the Senate Judiciary Committee Thursday, saying she thought he might “inadvertently kill” her when he was pinning her down to a bed during a house party in Maryland in the early 1980s.

“He was trying to attack me and remove my clothing,” Ford said.

Kavanaugh has vehemently denied these claims, calling them "totally false and outrageous."

Republican strategist Loretta Lepore said Kavanaugh’s situation has only highlighted how the nominating process has grown “ruthless not only for judges and federal appointees, but for elected candidates as well.”

“Fine, upstanding and, most importantly, qualified individuals will stay on the sidelines, which speaks ominously for the future of our institutions and our democratic processes,” Lepore said.

However, liberal commentators and some former federal judges do not agree.

"This situation is highly unsual," Walker said. "Though it is certainly true that if you allow your name to be put in for one of these positions, you will be placed under intense scrutiny and some unflattering things may come out."

Liberal commentor Jason Nichols adds that he thinks it's absurd to think this case will impede others from going for the job.

“There are people with clean records who get through the process without a hitch. There are certainly women who aspire to be judges, perhaps the president should look in their direction. If anything, this situation will make people more careful about their actions,” Nichols said.