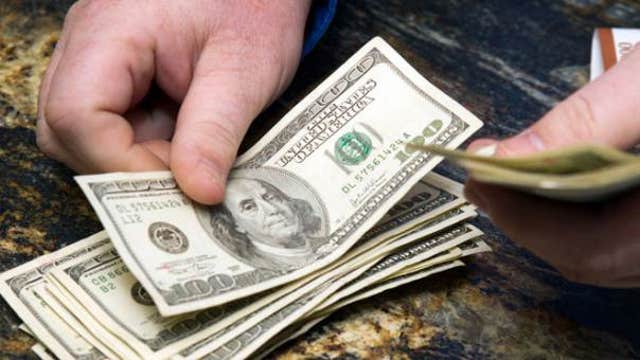 Store Owner in New York Butch Yamali breaks down how raising the minimum wage will hurt his businesses bottom line.

President Obama called for an array of new tax measures, including increases on top earners, in his penultimate State of the Union address Tuesday.

Obama's proposal for $320 billion in tax increases (over a 10 year period) are intended to fund new tax credits, including a tax credit for working families and other funding measures such as making college more affordable. In the address, the president also touted recent economic gains as evidence of a lasting recovery.

But there are certain areas beyond taxes, like regulation and healthcare, which will be crucial in providing tangible relief to Main Street.

While the NFIB Small Business Optimism Index rose two points in December, the sluggish nationwide recovery has hampered business owners from taking the risks needed to build up their ventures. Ahead of the address, the National League of Cities (NLC) issued a statement urging the president to “go local” in his remarks and in his approach to the year ahead, saying cities need strong partners “that work proactively to support the needs of our residents and communities.”

The NFIB notes with more business-friendly lawmakers having won seats in November, the odds are higher for political and economic certainty in the year ahead. In fact, the International Franchise Association (IFA) recently released its 2015 growth forecast, but cautioned that federal intervention could deflate the sunny projections. (IFA expects franchises to add 247,000 jobs in 2015 and for the GDP of the franchise sector to rise 5.1% -- the greater economy is forecast to see a 4.9% GDP increase.)

“Any new requirement has a disproportionate burden on small business owners because they don't have an in-house compliance unit, it takes them longer to get up to speed on their own,” Dan Bosch, Regulatory Policy manager at NFIB, says. “New regulations don't happen in a vacuum … and it becomes pretty overwhelming for [small businesses].”

These are the top taxes, rules and regulations Main Street is listening for the president (and then Congress) to address:

Definition of the Work Week Under ObamaCare

In early January, the House voted to redefine a full-time workweek from 30 hours per week (as stipulated in the Affordable Care Act) raising it to 40 hours per week. It was set at a 30-hour week so that more employees (under a mandate requiring companies with 50 or more full-time workers) would receive health coverage, but it drew bipartisan criticism and also from small businesses who said it would hamper job creation.

Debra Desrosiers’ business centers on employee-client relationships, and with rising labor costs to her business, the cost of care has also jumped (30% according to her). It is “ultimately hurting the families we’re serving,” the Visiting Angels franchise co-owner says.

As of Jan. 1, the nearly 40-year-long “caregiver exemption” expired, requiring third-party home care service providers (in this case, Visiting Angels) to pay workers overtime and minimum wage. Desrosier says Visiting Angel workers are paid a daily salary with no overtime, and that the elimination particularly impacts families in need of overnight care givers as they try to set budgets. As a result, workers accustomed to clocking in a specific amount of hours, might have to take on second jobs to make up the difference.

“Simply put, the [Department of Labor’s] proposal is a solution in search of a problem,” NFIB’s Bosch argues.

On the Topic of Taxes: Tax Extenders

One such tax burden is the so-called “tax extenders.” Congress was able to pass a deal in December that retroactively extended these tax breaks through the end of 2014, so as of Jan. 1, business owners were wading through murky tax waters yet again. Some of the key provisions include: Research and development credit, renewable energy credits, built-in gains provision, and Section 179 expensing.

Turkstra says the “small business expensing” provision is “really effective” and is perhaps the most important one. It allows small companies to deduct the cost of investments in large assets such as equipment purchases of up to $500,000, under the latest installment. He adds that this specific provision helps improve cash-flow for businesses as they recover investment costs more quickly.

If these provisions, or at least some of the more popular ones, were made permanent small companies and individuals could save billions, according to experts. Still, Turkstra explains the longer-term goal is for a simplification of the tax code.

In December, the National Labor Relations Board (NLRB) issued its long-anticipated “ambush election” rule, which would speed up union elections, and go into effect in April 2015. What this does is it cuts the average time period for when union elections occur from about 38 days to 10 to 21 days after the union requests a vote.

For its part the NLRB maintains that companies undermined the current setup with unnecessary delays, and have said the rule is meant to give employees who want to unionize a chance to do so.

“These proposals are intended to improve the process for all parties, in all cases,” NLRB Chairman Mark Gaston Pearce said in February 2014 when the rule was announced.

Bosch argues, “Small businesses are particularly disadvantaged because they lack in-house counsel, and will have to move quickly to find an attorney.” His advice businesses is to have an attorney lined up, so they can “hit the ground running” if notified.

Another NLRB-led effort that has small businesses worried is the redefining of joint employer standards. One sector that is particularly concerned is franchises, as the new definition essentially plucks control out from under franchise owners and sends it back to the main franchisor. Decisions like hiring, wages, schedules, benefits are no longer controlled by franchise owners like Desrosiers, but rather the main Visiting Angels branch.

“It changes the entire cost structure,” Matthew Haller, senior vice president of communications and public affairs for IFA, says. “In 2014 we saw around 13,000 [franchises] open in America. This change in law will seriously limit particularly small and emerging brands from offering franchise opportunities because it will become too risky to grow a franchise using [the joint-employer] model.”

NLRB General Counsel Richard Griffin has argued franchisors and franchisees should be involved in collective bargaining and can still maintain significant control over day-to-day operations.

Desrosiers says one of the main reason she opened her business was because she understood the franchise model. What joint employer does, she says, is bring management back to “corporate America.”

Twenty-nine states and the District of Columbia will see wage hikes this year, higher than the federal minimum wage. Here’s a roundup from the National Conference of State Legislatures (NCSL):