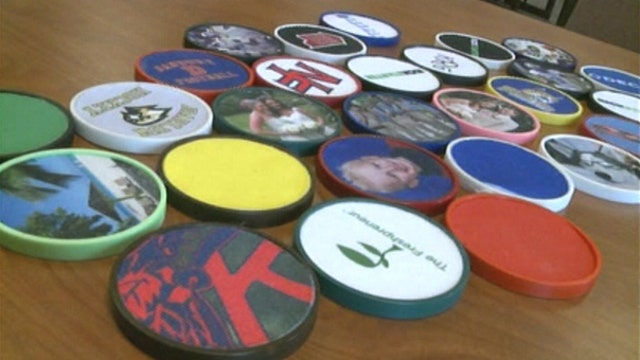 Today’s American Success Salute goes to an entrepreneurial teen -- a millennial -- who doesn’t plan on coasting through life. Meet Ryan Rist from Brookfield, Conn. Ryan is leaving home this fall to study at Temple University, but before he goes, he’s got about 300 coasters to make and ship all over the world. Ryan, 18, is the founder of Rist Custom Coasters -- a company that sells absorbent coasters with personalized pictures; keeping your good oak coffee table intact while reminding you of your favorite vacation. It all started with a school program that allows students two weeks off to come up with an idea for a product to sell -- and use the website Kickstarter.com, a worldwide crowd-funding platform, to finance it. From that, Ryan came up with the idea for Rist Custom Coasters. “Coasters are really boring and not very absorbent -- spilled water runs onto the table,” Ryan said. “I knew I wanted to do a Kickstarter.” So a Kickstarter he did. He got accepted into the program and launched his business. He started small, hoping to get just $500 in funding -- the absolute base amount he needed to get the company started. But donor after donor kept coming in, until he reached over $3,500 from 167 donors. “I was hoping to at least make my money back, it went a lot further than that and I’m really happy with that,” Ryan said. At $7.50 a coaster, he’s made a profit of almost $2,000. Customers from 14 different countries and 35 states in the US have placed orders -- mostly of pictures of their family, logos, scenery, and their pets. “Nothing too strange…yet,” Ryan said with a laugh. Ryan made his first prototype using his school’s 3D printer, but now makes each coaster by hand. The coasters have three main components: a plastic base made by pouring liquid rubber into a mold; an absorbent felt inside the base; and then the photo from pictures his customers email. Ryan said he doesn’t see himself selling coasters forever, but it will be nice to have some extra cash around while he’s in college. He is not sure what he’ll end up doing when he graduates, but he’s hoping it will involve entrepreneurship. “All the benefits of deciding when and how you work, what time you want to work on things, the freedom of not wanting to do tasks you don’t think are worth your time,” Ryan said. “And usually if you’re successful you’re happy with your work because you’re doing it for yourself.”