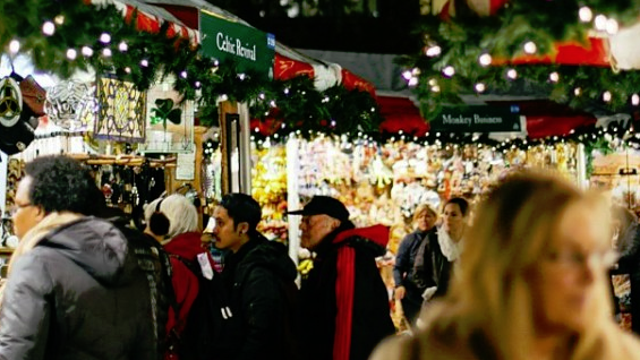 More than 150 small businesses compete for the attention of Big Apple shoppers at the Union Square Holiday Market.

“I come here every year. I think it’s so much fun – I love to shop what they have. I think it’s great and I always find something I like,” Nicolette Jelen, who was browsing a selection of knit hats at the Litchi Accessories booth, said.

Loyal fans like these are the lifeblood of the small businesses who apply for a spot at the Holiday Market. An estimated one million shoppers pass through the market in the weeks leading up to Christmas, according to UrbanSpace spokesperson Rachel Van Dolsen.

Entrepreneurs like Bernadette Libonate, owner of Brooklyn boutique Milly & Earl, say the market helps her attract new customers and show off her store’s mix of jewelry and home goods, all made by other independent designers. It’s also an opportunity to talk about the importance of shopping small during the holiday season.

“We can’t compete with the way big business undercuts. I live in Williamsburg and we’re getting J.Crew and Urban Outfitters and Anthropologie and it’s really taken a toll on all of us,” Libonate said. “We talk about it frequently … It’s so important to let customers know that it affects their community directly when they shop local and keep it small.”

And though a booth at the Holiday Market doesn’t come cheap – Libonate said it costs three times as much as her store’s rent in Brooklyn – she said it’s definitely worth it.

“A big part of it is just getting the name out there. I have an ecommerce site and to let people know where to find us year round is pretty important,” she said.