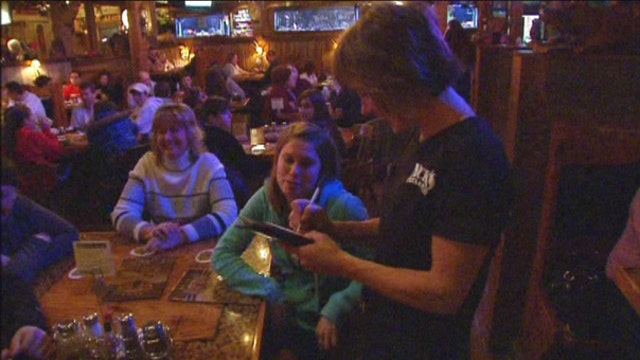 Etiquette expert Jacqueline Whitmore on when and how much to tip.

Waiters and waitresses serving younger adults beware: you may not receive a big tip -- or, in some cases, any at all.

Ten percent of millennials-- defined as 18-37 year olds -- said they don't leave a tip when dining out at a restaurant, compared to 3% of those who are older, according to the survey by CreditCards.com.

Meanwhile, of those aged 18-37 who do leave a tip, it tends to be lower than the average. The median restaurant tip for millennial diners is 15% compared to the overall median of 18%, the survey found. While just more than half (51%) of adults aged 38 and older tipped at least 20% when dining out, only about one-third (36%) of millennial respondents said they did the same.

Eighteen percent of millennials typically decline to leave any amount when presented with pre-entered tipping options in a taxi or ride-hailing service like Uber or Lyft, at a food truck, at a coffee shop, or other similar types of businesses, versus 12% of older adults.

"Tipping can be tricky and awkward because there’s really no right or wrong answer," said CreditCards.com senior industry analyst Matt Schulz. "However, the truth is that many workers rely on tips to generate a large portion of their income. To them, it’s not just about etiquette. It’s about being able to provide for their families and put food on their own tables."

More than one-quarter (27%) of millennials, including 30% of younger millennials (ages 18-27), would prefer to pay more for food at restaurants instead of leaving the gratuity, according to the survey, which found the same to be true in 1 in 4 Gen Xers (ages 38-53). However, those who are older heavily favored the current tipping tradition, with just 13% of baby boomers (ages 54-72) and 18% of the Silent Generation preferring higher food prices and no tipping.

"Tipping at sit-down restaurants has always been the standard in the U.S., but that’s not necessarily the case in other countries," Schulz said. "We’re seeing younger adults tipping less, and even showing a greater preference towards eliminating tipping altogether, even if it means paying more on the bill."

But it's not just millennials who don't want to shell out the extra cash. Men, Southerners, Westerners, parents with young children, lower earners and the less educated all indicate tipping less than the standard amount at restaurants.