Cruise demand is skyrocketing despite some industry-wide snafus, with 27.2 million passengers expected to set sail in 2018 according to Cruise Line International Associations (CLIA), continuing a trend that saw demand for cruising increasing by 20.5% in 2011-2016 period.

Even for those who are not interested in cruises, the economic impact of this industry is hard to ignore. In their 2018 industry outlook, the CLIA said that in 2016 cruising created 1,021,681 full-time equivalent jobs which resulted in $41.1 billion in wages and $126 billion in output, worldwide.

According to Andrea DeMarco, vice president of investor relations and corporate communications for Norwegian Cruise Line Holdings (NCLH) a strong economy has contributed to growing demand for cruises with the healthy economy resulting in consumers having more disposable income.

At the same time that more travelers are opting to cruise, what they are choosing to spend their money on while onboard the ship is changing.

Sales in retail shops on cruise ships is declining, whereas spending in excursions is increasing, according to DeMarco.

Thirty-three percent of cruisers surveyed who have taken a cruise within the past three years having a household income less than $80,000. 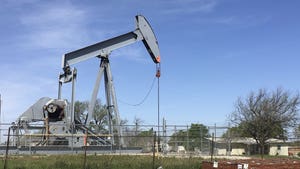 Oil prices fell on Thursday, dragged lower by a firmer dollar that offset support from a surprise decline in U.S. crude inventories.

DeMarco also noted that millennials are warming up to cruising, but this demographic has different tastes, preferring more freedom and flexibility, and values experiences, such as excursions. She added that there is a cruise for everyone, while baby boomers are still the biggest piece of the pie when it comes to cruise customers; 10 years from the now, the millennial demographic will be even more important.

It isn’t just millennials changing the landscape - how all consumers are spending is changing, too – with in-ship retail sales declining while customers are opening their pockets up more for experiences such as off shore adventures, noted DeMarco.

Uniworld recently launched “U by Uniworld,” a river cruise dedicated to travelers aged 21 to 45. A Uniworld spokesperson told FOX Business: “Demand for the new brand has been tremendous. In fact, bookings for U – which debuts with two ships beginning this April – the A which sails the Seine and the B which sails the Rhine, have been robust and talk is already underway to expand to other destinations including Asia.”