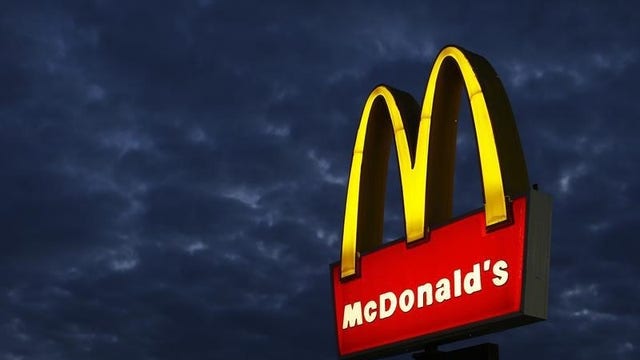 McDonald's Corp (NYSE:MCD), fresh off one of its worst financial years in decades, on Wednesday said Chief Executive Officer Don Thompson would leave at the end of February and be succeeded by Chief Brand Officer Steve Easterbrook.

Shares in the world's biggest fast-food chain, which have been underperforming major markets and several peers, jumped 3.2 percent in extended trading following the news.

Thompson, the 51-year-old former president of McDonald's USA who took the global helm in July 2012, had the challenge of adding to nearly nine years of sales gains at established restaurants.

But the following September, McDonald's reported a decline in same-store sales as it fought to hold on to customers with changing tastes amid external pressures ranging from political and economic turmoil in Europe to food safety scares in China.

"I don't think it was too much of a surprise. Maybe in the timing but not the action," Sanford Bernstein analyst Sara Senatore said. "This has been something that people have been talking about for a while."

McDonald's warned last week that business would be weak in the first half of 2015 and said it would cut its annual construction budget to the lowest in more than five years as it opens fewer restaurants in struggling markets.

In his role as chief brand officer, Easterbrook led McDonald's digital initiatives and efforts to boost menu innovation, according to a statement from the company. Industry watchers also said his track record includes turning around the company's business in the United Kingdom.

According to a 2008 story in the Guardian, that business was stalling in the early 2000s, but it had a strong run under Easterbrook, who took over as CEO in 2006 and refocused on the core business of selling hamburgers.

“The UK has been a good market for them for a long time, but it wasn’t always,” Senatore said. “He played a role in the turnaround.”

The question is can he turn around the company’s brand, particularly in the United States where it is losing share to rivals such as Five Guys Burgers and Fries, Chipotle Mexican Grill (NYSE:CMG) and other smaller, regional food outlets which are seen as offering fresher and higher quality products.

Easterbrook has experience leading other restaurant chains. In 2011, he left McDonald's and ran two UK-based restaurant chains, PizzaExpress LTD, a British chain which markets itself on quality and freshness, and later, Wagamama Ltd, a pan-Asian restaurant chain modeled on Japanese ramen bars. He returned to McDonald's in 2013.

Christopher Rowane, a portfolio manager at Bahl & Gaynor Investment Counsel, which owns roughly a million shares of McDonald’s, said Easterbrook is a logical choice for the job.

“I think that it’s very fitting that they’ve selected the chief brand officer,” he said. “This is really where we’re seeing a little bit of a vacancy in McDonald’s. They’re trying to really find their brand to be able to drive same store sales growth.”