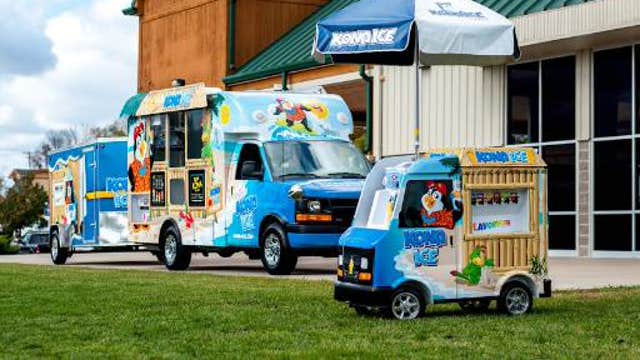 In this Salute to American Success, we’re taking a look at Kona Ice and president and founder Tony Lamb. Lamb began his career selling vacuums door-to-door and later became a marketing consultant. His “A-ha” moment came after his family had a “bad experience” with an ice cream truck, which prompted Lamb to create his tropical-themed, mobile shaved ice franchise, with the help of a former client/business partner.

After five prototypes and many tweaks and changes, Kona Ice’s trucks rolled onto streets in 2007. In the first year of business, the company sold 13 local franchises. The following year, Lamb said Kona Ice saw “30-40% attrition” in neighborhood sales, causing him to restructure the company’s business model.

Around 2009-2010, Lamb made more changes, including finding ways to lower the sugar content of Kona’s flavors and adding in vitamins, in order to meet federal guidelines.

“It was unbelievably difficult at first,” said Lamb. “We were forced to do it, but we were already a couple years into working on a reduced-sugar product.”

Today, Lamb owns 53% of the business, and has continued to grow Kona’s brand to around 500 franchises, with 655 trucks on the road in 48 states.

“We are selling franchises as fast as we can build them,” said Lamb. “We expect to sell 100 franchises this year… I could do more, but I don’t want to impact the quality of training."

According to Lamb, the franchise fee for each Kona Ice is $15,000, and royalty fees are $3,000 for the first five years of business.

“We provide our franchisees with a $100,000 turnkey, which includes the truck, inventory, training and territory,” said Lamb. “The trucks come with enough inventories to do $50,000 worth of business.”

The state of Texas features the most Kona Ice franchises (more than 100), and Lamb said California and Florida feature strong growth markets.

In addition to their signature shaved ice product, some Kona franchisees are adding pre-packaged ice creams to their trucks. In colder regions, hot products (gourmet coco and coffees) are starting to be served to customers as the temperatures drop towards the end of the season, which typically runs from March to November.

The company also created the “Kona Mini,” a small replica of its regular truck (minus the engine). Franchisees who own the unit can use it to bring their products inside, allowing them to operate year-round.

“Today, we have more than 200 minis in operation, which a lot [of franchisees] use in order to maintain relationships and pay their offseason bills,” said Lamb.

Lamb said he will never be too busy to hop on board trucks to stay up to date with operations.

"It’s very important to stay involved at every level of the business in order to know what is going on,” said Lamb.

To Lamb, one of the most important parts of his business his giving back to the community. Since Kona Ice’s inception in 2007, he said the company has given back $26 million to various organizations, including schools and youth sports leagues.

“My personal passion is fundraising,” said Lamb. “We are community tied… when it’s all said and done, it’s all about the relationships and how you connect with customers and whose lives you can impact.”