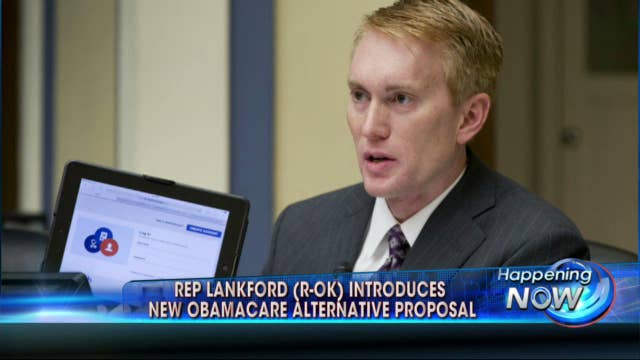 Could a health-care compact fix ObamaCare?

FOXBusiness.com’s Kate Rogers on a new health-care compact bill introduced by Rep. James Lankford, which takes power away from the federal government and puts it in the hands of state lawmakers to implement health-care systems.

There’s been several attempts from Republican lawmakers to change or repeal the Affordable Care Act, but Rep. James Lankford, (R-OK), is now throwing his own proposal into the mixed bag of bills.

Lankford, chairman of the House Republican Policy Committee, introduced the Health Care Compact Bill this week, which transfers health-care decision making power from the federal government into the hands of state lawmakers. The bill does not yet have a date set for a vote.

“It’s not a cure-all for ObamaCare—we aren’t trying to replace it,” Lankford says. “We are just trying to give control back to states. It’s a pilot program to put this out there. States don’t have to take it, but for states that want to take care of their own people, I don’t see why they shouldn’t be able to.”

So far, eight states have joined the Health Care Compact including Oklahoma, Alabama, Georgia, Indiana, Missouri, South Carolina, Texas and Utah. Legislation has either passed or is being considered by the state legislature in an additional 12 states, Lankford claims. The compact needs Congressional approval before it can be implemented in any states.

He points out the move would not impact long-standing federal programs for Veterans, Indian Health Services and other federally-run programs that are already in place. The compact also does not repeal or modify any part of the Affordable Care Act. States receive designated funding for health-care programs tied to the allotments set for stimulus in 2010, he says.

Under the ACA, every American in the country has to have insurance by the end of open enrollment period on April 1, or they will face a fine of $95 a year or 1% of their annual income for failing to comply. Insurance can be purchased via state and federal exchanges, and since open enrollment period kicked off on Oct. 1, more than 3 million Americans have selected plans on these exchanges.

Subsidies are also available for those making up to 400% of the federal poverty level, which is $45,000 for an individual and $94,000 for a family of four. If Congress approves the compact bill, people receiving subsidies that live in states operating on federal exchanges will then transfer onto the state’s program, he explains.

“We can do this more efficiently if we do it locally,” Lankford says. “The people closest to these individuals will take the best care of them. When you are a long way away, you are a number. When you are in the same town as these people, you are a neighbor. This is about neighbors and not numbers.”

The federal government has a hard time with efficiency, he says, pointing to the amount of Medicare fraud, which he says is about 10% of all claims.

“They won’t have that kind of fraud at the state level because it’s too small,” he says, “This also allows states to innovate—they can have a free market system or a single-payer system. It will be up to the state to determine what they want, and allow them to take care of their people as they see best.”