Teenage underdog Bianca Andreescu overcame the odds to defeat tennis star Serena Williams 6-3, 7-5 in the U.S. Open finals on Saturday, and the victory paid off big time for the young Canadian, with this year's tournament featuring the richest prize pool in tennis history.

The 19-year-old became the first Canadian ever to win a major singles title, and entered the finals as a +240 underdog against the far more seasoned 37-year-old Williams, according to FanDuel Sportsbook. For those who bet on the underdog, a $100 bet would have yielded a $240 profit.

The No. 15-seeded Andreescu took home a whopping $3.85 million for the win, while Williams, who has won the U.S. Open six times herself, made $1.9 million as runner-up, according to the U.S. Open website.

2019 US OPEN: WHY BILLIE JEAN KING NATIONAL TENNIS CENTER'S $600M MAKEOVER IS AN ACE FOR TENNIS
ORACLE'S LOWER-TIER TENNIS TOUR OFFERS YOUNG US PLAYERS A NEW PATH TO THE PROS

"It's so hard to explain in words but I’m just beyond grateful and truly blessed," Andreescu said on court. "I’ve worked really, really hard for this moment. This year has been a dream come true and now being able to play own this stage against Serena, a true legend of this sport, is amazing."

As for the remaining players, semifinalists made off with $960,000 while quarterfinalists took home $500,000. Players who lose in the first round still receive $58,000 each. 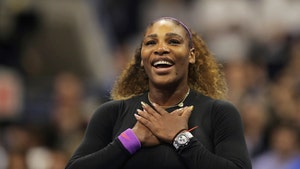 As one of the most sought-after endorsers in all of professional sports, Williams also has deals with several major corporate brands, including Nike.

This year’s U.S. Open has the highest total prize money and champion payouts in tennis history, with the total prize money amount coming to a staggering $57.24 million, which is a 13 percent increase compared to last year's $50.57 million purse.

Saturday’s women's singles final between Williams and Andreescu is actually the second time the two have played a head-to-head matchup played, with Andreescu wing the first match in the final of the 2019 Rogers Cup in Toronto earlier this year.