The ongoing trade war between the United States and China is weighing heavily on American farmers, but despite the pain, they believe President Trump has their best interests in mind.

“Our farmers are in this for the long run. We’re interested in having a level playing field and we think the president is working hard to get us that playing field,” American Farm Bureau President Zippy Duvall said on “Bulls & Bears” Wednesday.

China has suspended the purchase of U.S. agricultural goods as a retaliatory measure against the Trump Administration’s new 10 percent tariffs on $300 billion of Chinese goods.

"Our farmers are very appreciative of this administration who has all along said that they would stand behind the farmers and back up farmers."

Duvall said American agriculture has gone through a tumultuous economic climate driven by depressed prices resulting and natural disasters in a loss of half of its net farm income before the start of the tariff wars.

“We have things stacking on top of each other to make the economy bad, but our farmers are hanging tough hoping that we will get that level playing field across the world,” he said.

The Trump Administration rolled out an aid package worth $16 billion to help farmers caught in the crosshairs of a more-than year-long trade war between the U.S. and China.

“Our farmers are very appreciative of this administration who has all along said that they would stand behind the farmers and back up farmers,” Duvall said.

“I met with farmers in Webster County and Green County, Iowa a few weeks back and they told me, I remember this vividly, that they think they may never be able to sell to China again as a result of this trade war and this tariff battle,” he said on “Bulls & Bears” Tuesday. “That scares them deeply.” 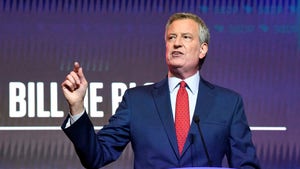 De Blasio doubles down on his tax-the-wealthy plan

New York City Mayor Bill de Blasio has said it before, and he's saying it again: he wants to "tax the hell out of the wealthy."

U.S. agricultural exports to China accounted for $9.2 billion in 2018, according to the Department of Agriculture.