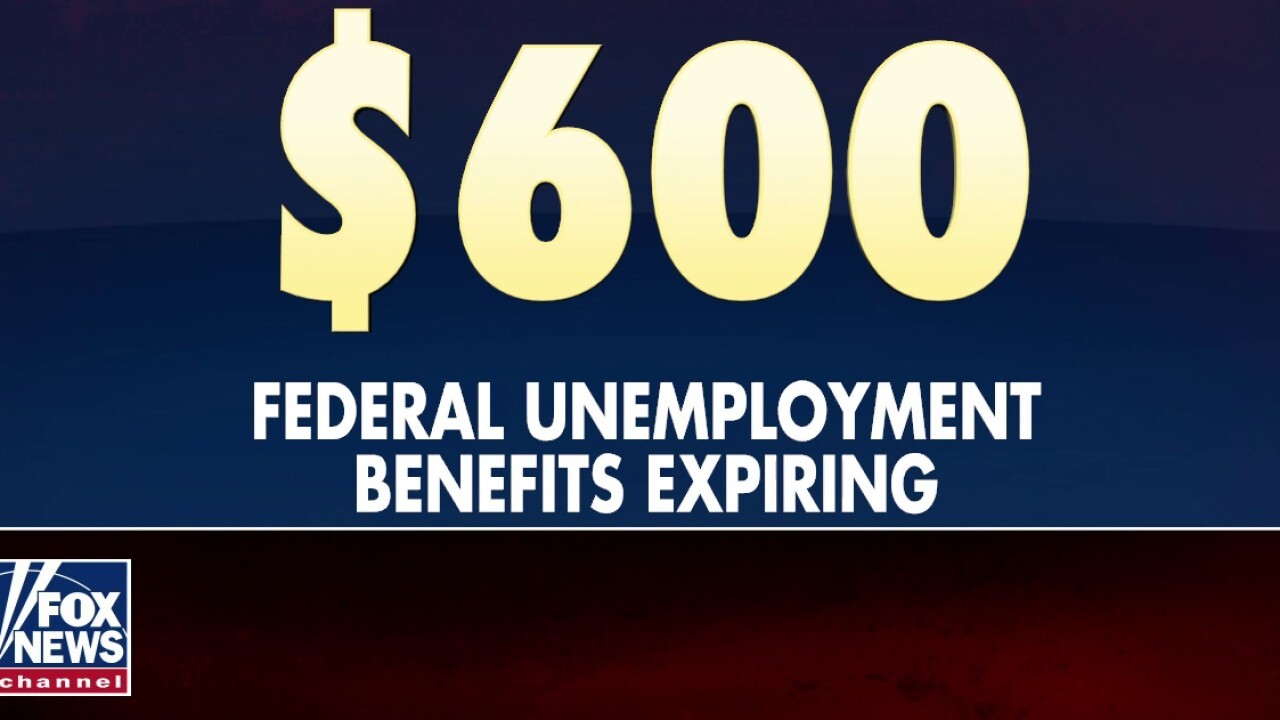 President Trump came out in favor of a temporary extension of federal unemployment benefits Thursday, but it's likely too little, too late as they are set to expire on Friday and the Senate has adjourned for the weekend.

The Senate's stalemate made it clear that a large bill, like the HEROES act passed by the House in May, would not get through the upper chamber this week, so lawmakers instead focused on an extension of unemployment benefits Thursday.

The leading Republican proposal, introduced by Sen. Ron Johnson, R-Wis., would extend the federal unemployment benefits through the end of the year, but it would reduce them from $600-a-week to either $200-a-week or two-thirds of lost wages.

Many Republicans have shuddered at the $600-a-week federal benefit since it originally passed as part of the CARES Act in March. Sen. Johnson tweeted that his bill would modify the benefits in a way so that it “doesn't harm small businesses by incentivizing unemployment, but recognizes the assistance needed for Americans.”

President Trump did not put a number on the extension that he would like to see, but he did try to blame Democrats for the Senate’s gridlock.

“I want to thank Senate Republicans for fighting to extend unemployment benefits today in the face of very strong Democrat obstruction, which I'm surprised at because this is great for our country and it's great for our workers and it wasn't our workers' fault,” Trump said at a press conference.

Meanwhile, Senate Democrats blame the GOP for the impasse and have remained laser-focused on passing the $3 trillion HEROES Act, which includes an extension of the full $600-a-week federal unemployment benefit.

But the HEROES Act appears dead on arrival for most of in the GOP, and Senate Majority Leader Mitch McConnell, R-Ky., said Wednesday that there is infighting over Republican proposals.

“There are about 20 of my members who think we've already done enough and some who regret that we did what we did back in April and March,” McConnell told Martha MacCallum. “So, yeah, I do have about 20 members who feel that we've added enough to the national debt.”

The Associated Press reports that Pelosi and Schumer will meet with White House Chief of Staff Mark Meadows and Treasury Secretary Steve Mnuchin Thursday night to try to revive talks.

Trump was asked Thursday what Republicans would put on the table to stop the federal unemployment benefits from lapsing.

“That's a great question. I can’t tell you, though, because that wouldn't be very smart from a negotiating standpoint,” he said.

Whatever it is, lawmakers will be feeling the pressure to get extended relief passed. The Labor Department said 1.43 million Americans filed for unemployment benefits last week, the second week in a row those numbers have risen. And the Commerce Department announced Thursday that the U.S. GDP shrank at a 33 percent annual rate in the second quarter, the worst drop on record.