President Trump’s latest tariffs on $112 billion worth of Chinese goods started at midnight on Sunday, likely delivering a direct blow to American consumers, barring a last-minute reversal or ceasefire.

Beginning Sunday, the U.S. will impose a 15% tariff on a number of consumer goods -- including footwear, clothing and textiles, which constitute more than a third of the latest target in the more than yearlong trade war. So far, most U.S. imports of clothing and shoes from China have been spared.

Now, however, the share of Chinese imports of textiles and clothing affected by Trump’s tariffs leaps to 87% from 10%, according to the Peterson Institute for International Economics.

Of course, the latest round of tariffs will not only affect clothing and shoes: Under the new schedule, 69% of consumer goods will face an import duty, up from 29% now. 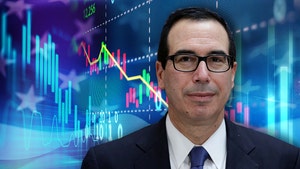 Treasury's Mnuchin says no recession on horizon, China will ultimately pay for tariffs

Mnuchin, speaking from the G-7 in France, said despite growing fears of an economic slowdown, the American economy was still the “bright spot” of the world.

Earlier tariffs imposed by the Trump administration mostly avoided direct consumer hits, instead narrowing in on items like imported parts and components. By last September, almost 82% of imported inputs from China were covered by a tariff.

“The bottom line is that, for the first time, Trump’s trade war is likely to directly raise prices for a lot of household budget items like clothing, shoes, toys, and consumer electronics,” PIIE senior fellow Chad Brown wrote in a report.

"With some products facing tariffs as high as 30 percent, many businesses will have no choice but to pass along those costs to consumers," the letter reads.

"Price increases will likely hit shoppers just as they are making their holiday purchases."

Plus, assuming the U.S. and China are unable to reach a trade deal before the end of the year, Trump is planning on expanding the tariffs to even more products come Dec. 15, when the next round goes into effect. The president said he decided to delay those duties, which will hit $160 billion of Chinese goods, including mobile phones, smartwatches and computer monitors in order to allow retailers to stock up on inventory ahead of the crucial holiday-shopping season.

“Starting on December 15, US companies will find that 100 percent of their imports from China, in nearly all product categories, are being targeted by Trump’s tariffs,” Brown wrote.

Trump, however, defended his approach in a tweet Saturday afternoon, claiming that Democrats want "to give up on our very successful Trade battle with China, which has had its worst Economic year in memory (and getting worse). We are taking in $Billions. Will be big for Farmers and ALL!"

"I want to see a deal with China," she said. "Because I am going to hear, like everybody else is, about increased costs on our consumers and what we need to be saying to people is we are losing jobs in this country and our workers are not on a level playing field."