President Trump renewed his criticism of the Federal Reserve on Wednesday, saying the U.S. central bank acted "far too quickly" on raising rates.

Less than two hours later, Trump criticized Fed Chairman Jerome Powell for what he sees as two "enormous" mistakes: Powell saying a July rate cut was a "mid-cycle adjustment," and him saying the Fed is data dependent.

And shortly before the stock market closed on Wednesday, the president took yet another shot at the U.S. central bank chief as well as boasting that China was losing an economic clash with America.

The slams come as global central banks cut interest rates. Germany, France and Japan are among the countries with negative rates, while four other banks cut rates last week; New Zealand, India, Thailand and the Philippines.

Those actions, along with the inverted yield curve, are ramping up pressure on the Federal Reserve to cut rates for the second time in September after July’s move. Investors are also speculating rates could fall even further.

Grant, the chief global strategist at B. Riley FBR, said Wednesday on "Varney & Co." that rates of U.S. Treasuries could fall below zero. 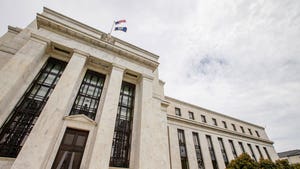 Recession indicator blares loudest warning since 2007: How will the Fed respond?

Hopes for a deeper rate cut jumped Wednesday afternoon, with 62.8 percent of traders pricing in a 50 basis point cut.

“I think it’s possible," Grant said. "It certainly looks to me like, because of what the central banks have done in the rest of the world – meaning in one week’s time we went from negative yields to $15.1 trillion [in debt], we’re now at $15.9 trillion [in debt] and the Fed has got to respond to this … there’s just no choice."