The City of Brotherly Love is a “microcosm” of what is happening across the country,  according to Philadelphia Federal Reserve Bank President Patrick Harker.

“If you ask employers, one of their biggest needs is workers -- they need workers -- skilled and unskilled workers,” he told FOX Business’ Maria Bartiromo on Friday. “And the good news, right now, is that we're bringing more people off the sidelines. But that's not always an easy thing to do. Sometimes people aren't living in the right place or they don't have a car to get to work.”

CALIFORNIA MAYOR SAYS HIGH COST OF LIVING IS ROOT OF HOMELESS CRISIS
HOW MANY AMERICANS ARE PAYING ALL OF THEIR TAXES?

However, the Federal Reserve Bank’s Economic Growth & Mobility Project, is working to solve these issues, he said.

CLICK HERE TO WATCH THE ENTIRE INTERVIEW WITH PATRICK HARKER

Also, Harker said Philadelphia is grappling with economic problems of its own.

“Philadelphia is on the rise,” Harker said. “There's a lot of good things happening but we still have challenges. There’s … still deep areas of poverty. We need to help those people get into the game, get into the workplace.”

Philadelphia is Pennsylvania’s largest city with a population of 1.58 million, according to recent Census data. While the number of residents living in poverty in Philadelphia decreased to 24.5 percent in 2018, the median household income increased to $46,116.

CLICK HERE TO WATCH THE ENTIRE INTERVIEW WITH PATRICK HARKER

And it’s not only Philadelphia experiencing hardships. California is also facing a homeless crisis. 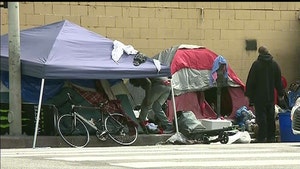 Inside Los Angeles' Skid Row, the epicenter of the homeless crisis

FBN's Kennedy goes inside L.A.'s Skid Row, which is considered to be the epicenter of the homeless crisis.

The homeless crisis is growing in Los Angeles, San Diego, Sacramento and San Francisco, despite the state pouring billions of dollars into cleanup efforts. Homelessness in Los Angeles County has spiked by 12 percent over the past year, and the area has the nation’s largest outdoor homeless population.

LOS ANGELES, CALIFORNIA - SEPTEMBER 23: A man stands in front of a homeless encampment, with the Hollywood sign in the background, on September 23, 2019 in Los Angeles, California. A new plan under consideration in the city would bar people experienc (Getty)

However, when Bartiromo asked Harker “have our cities began to take a step down?” he said: “I think you have to look city by city. It's not a one size fits all.”