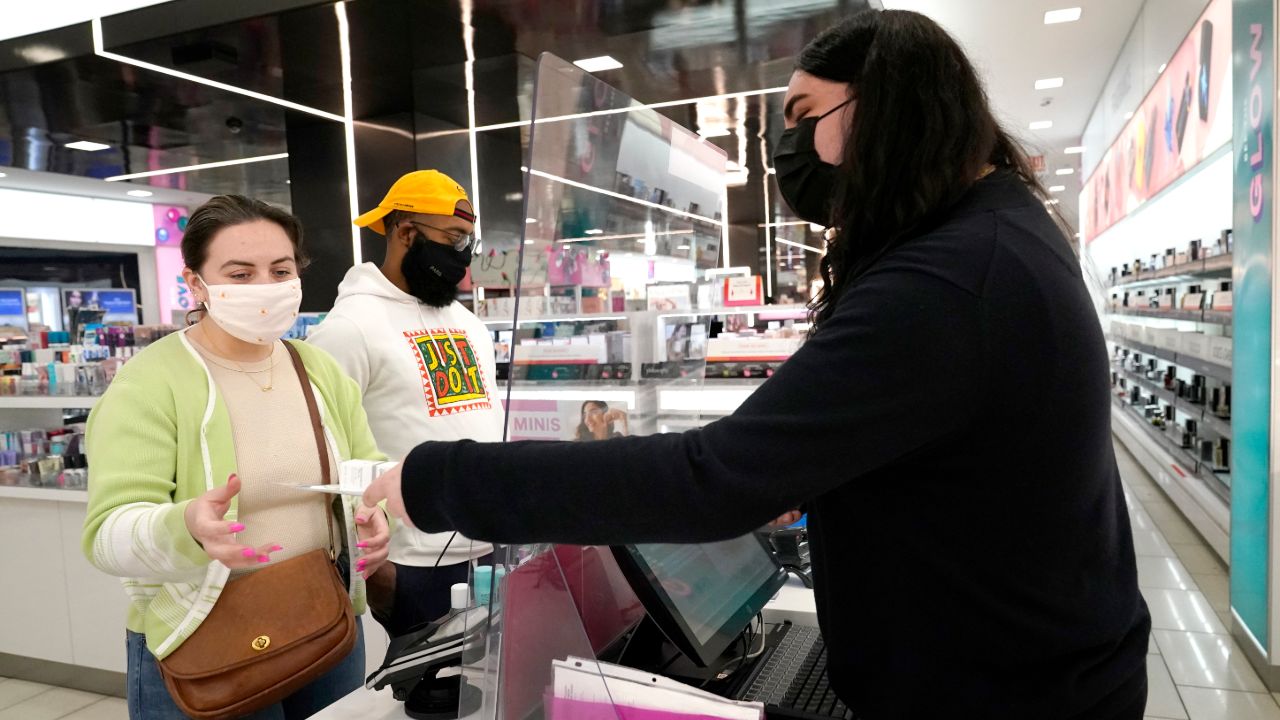 With the viral pandemic re-surging through the country and the economy under threat, Story has decided to slash her holiday shopping budget. She'll spend less than $2,000 this season, down from several thousand dollars in 2019. Worried about entering stores, she's buying gifts online and going out only for groceries.

“I want to be conservative,” said Story, a 47-year-old Atlanta resident. “I’m not a scientist, but the best precaution is to stay in place.”

The acceleration of coronavirus cases is causing an existential crisis for America’s retailers and spooking their customers just as the critically important holiday shopping season nears. It's also raising the risk that the economy could slide into a “double-dip” recession this winter as states and cities re-impose restrictions on businesses and consumers stay at home to avoid contracting the disease.

The accelerating surge of coronavirus cases across the U.S. is causing an existential crisis for America’s retailers and spooking their customers just as the critically important holiday shopping season nears. (AP Photo/Charles Rex Arbogast)

An anxious consumer is a frightening prospect for retailers as well as for the overall economy. Any sustained recovery from the pandemic recession hinges on consumers, whose spending fuels about 70% of economic growth.

So as the virus rampages across the nation and with holiday sales expected to be weak and heavily dependent on online shopping, retailers are considering extraordinary steps to draw customers.

Some, like Giftery, a small shop in Nashville, Tennessee, are adopting their own safety restrictions. To reduce respiratory particles that could spread the virus, Giftery is asking shoppers to refrain from talking on cellphones.

“It is vital for us to stay open,” said William Smithson, the owner of Giftery, which generates about 35% of its annual sales from the holiday season.

At the same time, some high-end retailers are giving customers extra coddling. Neiman Marcus is letting shoppers book appointments to take virtual tours of its holiday trees and other decorations if they’re too fearful to enter a store. In doing so, the retailer hopes its customers will also get into the spirit of buying gifts.

Customers wait in a socially distant line Wednesday, Nov. 18, 2020, outside the Apple Store along the Chicago River in Chicago. (AP Photo/Charles Rex Arbogast)

2020’S BEST BLACK FRIDAY DEALS ARE AT THESE RETAILERS: REPORT

“Business restrictions are increasing, and there will be some economic fallout from that,” said Jim O’Sullivan, an economist at TD Securities. But "even without authorities announcing new restrictions, individuals are likely to pull back from activity on their own.”

O’Sullivan predicts that the economy won’t grow at all in the final three months of the year — down from his earlier forecast of a 3% annual growth rate in that quarter — and will shrink 2% in the first three months of 2021. He, like most economists, expects a rebound starting in the second quarter once a vaccine is widely distributed.

O’Sullivan’s forecasts assume that Congress will agree on roughly $1 trillion in new stimulus for the economy by early 2021. Yet so far, there’s no sign of progress toward an agreement. More than 9 million people will lose their unemployment aid at year’s end, when two jobless aid programs are set to expire, unless Congress extends them. Consumer spending will likely fall further.

New viral cases doubled in just three weeks, O’Sullivan noted, after the previous doubling had taken six weeks. And as a consequence, many states are adopting or considering new restrictions on businesses. Maryland has limited stores and restaurants to 50% capacity. Retailers in most of California are now capped at just 25%; gyms, restaurants and movie theaters are closed to indoor customers. Illinois and Washington have limited stores to 25% capacity.

Sales at restaurants and bars fell in October for the first time in six months. Restaurant traffic declined further in November, according to the reservations provider OpenTable. Hotel occupancy is down from a month ago. Consumer spending on credit cards dropped in the first week of November from a month earlier, according to data compiled by Opportunity Insights.

Sales at restaurants and bars fell in October for the first time in six months. (AP Photo/Marcio Jose Sanchez, File)

After the deep recession that erupted in early spring, the economy did rebound faster over the summer and fall than most economists had expected. And some industries are still faring well. Home sales rose to a 14-year high last month. Manufacturing output, too, is still growing, though it remains below pre-pandemic levels.

But those positive signs reflect an unequal recovery. While lower-paid employees in face-to-face industries have lost jobs or fear losing them, higher-paid Americans have mainly been able to keep working from home. These consumers have shifted much of their spending away from services, like eating out, going to movies and hitting the gym, to buying goods — from computers and home and garden supplies to appliances and fitness equipment.

Yet many of those purchases have occurred online, with e-commerce sales having jumped 29% in the past year. By contrast, sales at physical retail stores, excluding autos, are essentially flat over the past 12 months.

As Story, the Atlanta consumer, and other Americans cut back and as colder weather ends outdoor dining in much of the country, consumer spending will likely weaken and hiring slow. Layoffs could rise. The number of people seeking unemployment benefits rose last week to 742,000 — a historically high number and the first increase since early October.

Small businesses are particularly worried about being forced to shut down again.

“If we close, it will be a devastation,” said Paulette Garafalo, CEO of Paul Stuart, a high-end clothing retailer that operates five stores in Chicago, New York and Washington, D.C.

The stores previously closed for four months while the company pivoted to online sales. But that shift generated only about 25% of pre-COVID business. Sales have since improved. But Garafalo doesn’t envision a boost from the holiday season. She just hopes sales won’t fall.

Out of a sense of urgency, Garafalo's stores have called in their most seasoned sales people to alert customers to new merchandise and aggressively marketing a gift guide.

“Winter is typically the slowest time for restaurants,” Perez says.

Taco Street was open for indoor dining for only a few weeks before having to shut down again. Perez and her husband have been pouring their savings into the business. They don't know how long that can continue.

Macy’s, long an iconic symbol of the holiday shopping season, had to temporarily close its store in El Paso, Texas, because of a viral surge there. The chain is studying how the surge in viral cases is affecting the willingness of shoppers to enter its stores. In the meantime, Macy's has sped up its checkout service for curbside delivery.

Other chains, particularly Target and Walmart, have benefited from changing habits. Customers are increasingly spending more when they visit the two chains, because they can combine shopping trips and buy food, clothes and other household goods — all at one location. That additional spending has come at the expense of small and independent stores.

For many consumers, the pandemic has transformed what shopping means. Alyse November, a licensed social worker in Boca Raton, Florida, says her clients have become increasingly stressed about shopping.

“Shopping was an outlet to relieve stress — it was an escape from life,” November said. “Now, it’s a source of stress because the process of it is so cumbersome. ... We don’t know how to do it and do it safely.”