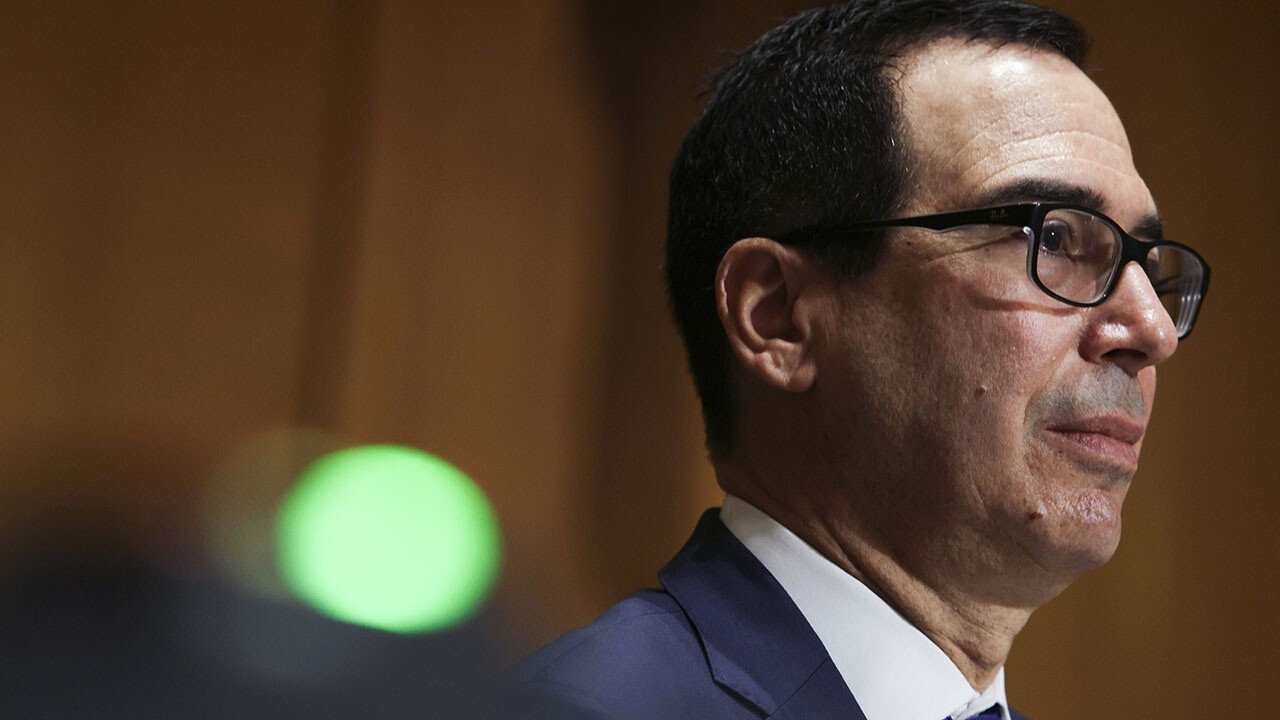 People close to Mnuchin say his stewardship of economy will allow him to succeed in private sector: Gasparino

FOX Business’ Charlie Gasparino on the future of Trump officials like Steven Mnuchin and Larry Kudlow.

﻿When Treasury Secretary Steven Mnuchin leaves his Cabinet post next week, friends and former business associates say he’ll likely return to what he was doing before joining the Trump White House: Jet setting between his homes in New York and Los Angeles, and raising money for a hedge fund. He may also start producing movies again, these people say.

Mnuchin’s future as a private businessman is likely to be successful. He has a fat Rolodex of contacts compiled during his many years at Goldman Sachs, later as a private investor and most recently serving as the nation’s top economic policymaker. His biggest attribute: As a private investor, he had a decent record of making money for himself and clients. His biggest score: investing in and flipping the distressed IndyMac bank, which netted Mnuchin and his partners hundreds of millions of dollars in profits.

Even woke Hollywood may look beyond Mnuchin's association with Donald Trump; with an estimated net worth of $400 million, Mnuchin has a lot of money to throw around for films (he is best known for producing "Sully" starring Tom Hanks) and actors, struggling amid COVD-19 lockdowns, might not care who signs their checks. Mnuchin’s wife, Louise Linton, is a Hollywood actress.

“Mnuchin will be fine,” said one Wall Street CEO who has known and worked with the treasury secretary for decades. “He did a good job with the economy under Trump and investors think he knows what he’s doing. And he will likely raise money for a fund and spend his time bouncing between New York and L.A."

Unfortunately, it won’t be that easy for most of his White House colleagues to make it in a post-Trump business world, branding experts and corporate executives tell FOX Business.

The problem most Trump officials face is one of perception and means. Unlike Mnuchin, they don't have the wealth and the cache to start a hedge fund or produce movies.

Many will have to seek employment in a corporate America that has increasingly embraced progressive causes. On top of that, the nation’s business community has been uniformly outraged by Trump's post-election behavior that culminated in a deadly riot last week on Capitol Hill.

At least for now it is rebuking most of what is associated with the Trump brand.

“How do you justify to your clients that you hired a Trump loyalist?” Myers asked.

DETOUR IN THE PATH TO RICHES

Typically, a White House stint is a ticket to a plum role in tech, banking or consulting. Many soon-to-be officials in the Biden administration have been spinning through the Wall Street-Washington-Silicon Valley revolving door for years, and they are far from alone.

Robert Rubin famously left as chief of Goldman Sachs in the early 1990s to become Bill Clinton's treasury secretary and craft policy that created record economic growth. He then returned to Wall Street taking a lucrative senior position at Citigroup.

More recently, former Federal Reserve Chair Janet Yellen made over $7 million in speaking fees the last two years from the banks she will now be regulating as Biden’s treasury secretary. Deputy Secretary of State under Obama Antony Blinken made $1.2 million consulting for companies including Facebook, Boeing, and Blackstone and will soon be Biden's secretary of state.

Brian Deese went from being a key climate policy adviser for former President Obama to a top executive at money-management powerhouse Blackrock. He is now Biden’s National Economic Council director.

On paper, having the Trump White House on your resume should be a plus as well. The people who carried out his economic policies produced historically low unemployment, rising wage rates and a booming economy before the pandemic. During the COVID-19 lockdown, policies from the White House helped prevent the economy from falling into a depression and produced a vaccine in record time.

But working in the Trump administration has always presented unique challenges for those who sought private sector employment. Trump’s populist policies on trade, for instance, angered banks and investment houses.

After Trump’s 2020 loss to Joe Biden, the president slid further into conspiracy theories about a stolen election, refusing to engage in an orderly transition of power as he contested the result, while most of his advisers remained largely silent at least in public.

Then came last week’s storming of the United States Capitol Building by an angry mob of Trump supporters following the president's rally in D.C. Five people died in relation to the Capitol riot, which was widely condemned by policymakers and the nation’s top business executives such as JP Morgan chief Jamie Dimon as among the darkest days in American history.

The damage to the Trump brand -- a business that earns fees slapping his name on water, steaks, high-end office towers and condos, not to mention his eponymous golf clubs in Bedminster, NJ., and Mar-a-Lago in Palm Beach, FL -- has been swift with clients bolting and corporations fleeing. Trump's main lender, Deutsche Bank, says it will no longer do business with him, while the PGA has said it won’t have its 2022 championship at the Trump National Golf Club in Bedminster, N.J.

More than 70 million people voted for Trump during the last election — the second highest vote tally ever but advertisers are likely to shy away from a brand associated with conspiracy theories and riots. Thus, plans to start a Trump television channel may not get off the ground.

And the tarnish will likely extend, however unfairly, to those who worked for the president, corporate executives tell FOX Business.

Even Mnuchin’s business prospects may take a hit because of the Trump connection. Myers called the treasury secretary "the least toxic” of Trump advisers to corporate America because during his four-year tenure he enjoyed a decent relationship with Democrats, such as House Speaker Nancy Pelosi and soon-to-be Senate Majority Leader Chuck Schumer and worked with both on COVID relief.

Mnuchin also kept a running dialogue with major CEOs, earning their trust as a voice of reason in an administration that often took populist stances at odds with Big Business.

“While there is some taint, I'm sure he’ll land somewhere after a cooling offer period,” Myers adds.

OUTRAGE, RESIGNATIONS AND LOOKING FOR WORK

Outraged by the president's behavior and possibly sensing the taint of working for Trump, several Cabinet officials abruptly resigned from the administration following the riots.

Among the most critical of the president was former acting White House chief of staff and budget director Mick Mulvaney, who resigned from his post as special envoy for Northern Ireland following the D.C. riots.

Mulvaney, who has spent most of his career in government, is now said to be looking for a private-sector job including as television commentator or possibly a position in academia, he said in an exchange. He declined further comment.

When asked about the possible move back to the financial news network, Kudlow said in a note: “Please don’t assume anything. Thank you.” A CNBC spokesman didn’t respond to a request for comment.

Gary Cohn served as Trump’s first National Economic Council chief but left in March 2018 after ongoing disagreements with the president on tariffs and trade policy. His private-sector journey could be a template for what others will face after leaving the White House when Trump's term ends on Jan. 20.

Cohn spent much of his career on Wall Street mainly at Goldman Sachs, serving as the firm's No. 2 executive during the 2008 financial crisis. Since leaving the administration in 2018, he was noticeably absent from corporate America until landing a job earlier this month as vice chairman of IBM. A few months earlier, he launched a SPAC or Special Purpose Acquisition Company that buys companies to take public. A spokeswoman for Cohn declined to comment