While testifying before the House Financial Services Committee, Zuckerberg said that 10 years ago, he believed China would help contribute to a more open society -- but that he's since re-evaluated that opinion.

"Today it seems, that in some cases working in China ... compromises American companies' ability to promote our values abroad and around the world," he said.

The social network's founder estimated that six out of the top 10 companies coming out of China don't share "American values."

Zuckerberg's comments come in the midst of unprecedented pressure from China on American companies, including Apple, the NBA and gaming company Activision Blizzard, to fall in line with the communist government's stance on pro-democracy protests in Hong Kong.

China banned Facebook from operating in the country in July 2009, shortly after a series of violent riots broke out. Beijing accused the activists of using Facebook as the main source for their communications.

The protests, now in their 18th week, began earlier this summer over a now-shelved bill that would have allowed the extradition of suspected criminals from Hong Kong to mainland China, where the courts are controlled by the Communist Party. They’ve since morphed to reflect broader calls for reform. 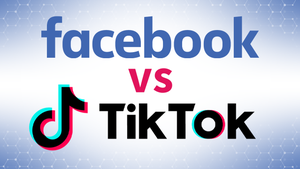 In a recording published online, Facebook’s leader explains his strategy against the Chinese-based company TikTok.