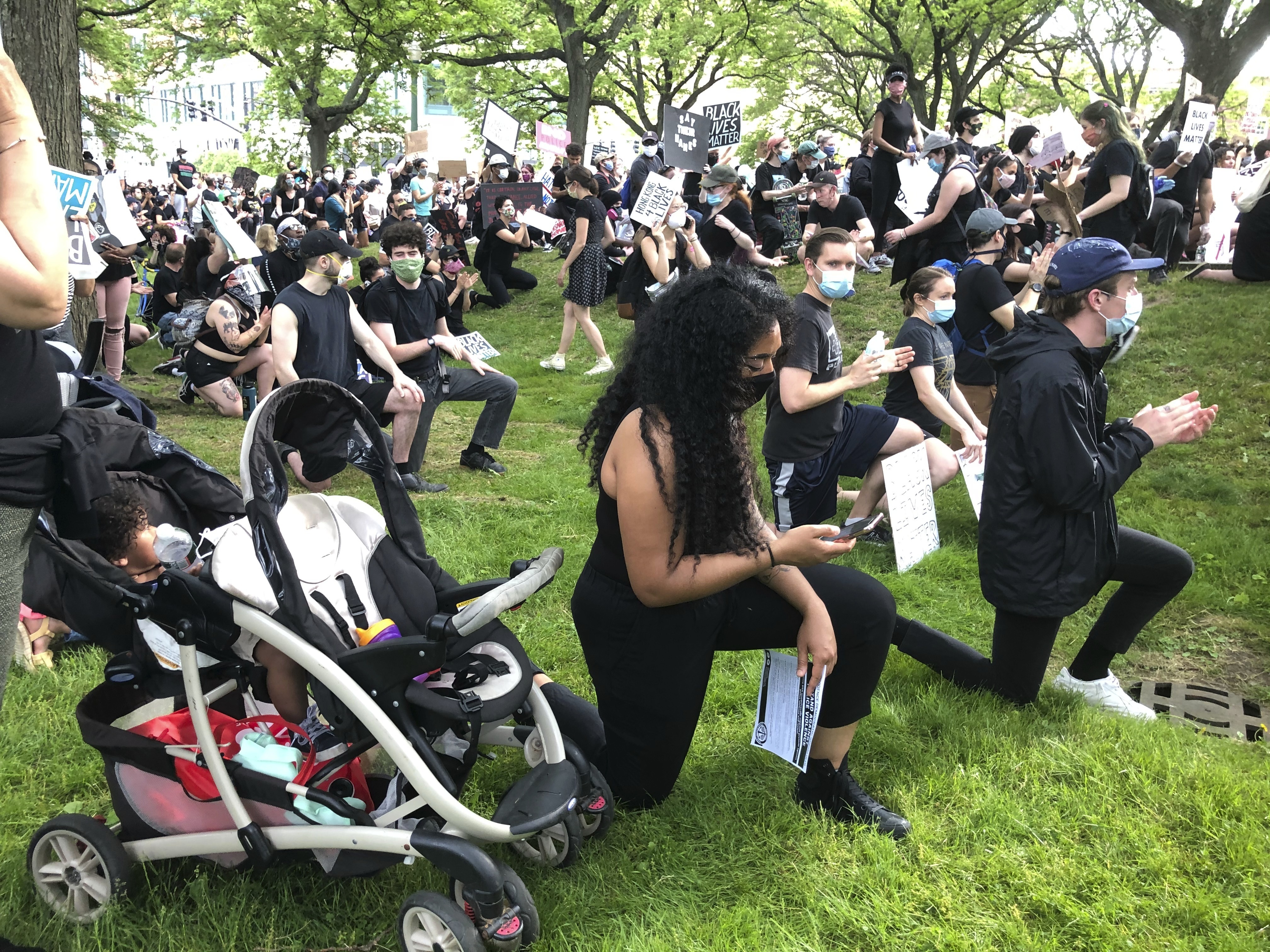 When a friend shared a Facebook post with Michelle Burris inviting her to protest in downtown Washington, D.C., last Saturday, she knew she had to go. So she bought a Black Lives Matter mask from a street vendor before marching the streets of the district with a “No Justice, No Peace" sign.

After that march ended, she pulled up details on Instagram for a car caravan demonstration just a few blocks away. “It was extremely powerful, not only Facebook but Instagram,” Burris said. “It was very easy to mobilize.”

Protesters are using a variety of technology tools to organize rallies, record police violence and communicate during the marches sweeping the U.S. and other countries following the death of George Floyd. Some of that involves secure messaging services like WhatsApp, Signal and Telegram, which can encrypt messages to thwart spies. Those apps, along with others for listening to police scanners and recording video, are enjoying an uptick in popularity.

Anjel Newmann, 32, kneels while scanning her phone during a peaceful rally in Providence, R.I. on Friday. (AP Photo/Matt O'Brien)

But experts say convenience and reach are key. “Reaching as many people as possible is the number one criterion for which platform someone is going to use,” said Steve Jones, a University of Illinois at Chicago media researcher who studies communication technology.

That means Twitter, Facebook and Facebook-owned Instagram remain the easiest ways for people to organize and document the mass protests. Facebook's tools remain popular despite a barrage of criticism over the platform's inaction after President Donald Trump posted a message that suggested protesters in Minneapolis could be shot.

“I don’t want to support or be a part of something that is possibly supporting Trump and his racist, hate filed spew,” said Sarah Wildman, who's been to three protests in Atlanta and has used Instagram exclusively to locate and to document the demonstrations she attended. But she said she feels that, at this point, “the benefits of Instagram outweigh not using it.”

Half a century ago during the civil rights protests, Jones said, it was almost impossible to know what was going on during a protest. “There was a lot of rumor, a lot of hearsay,” he said. “Now you can reach everyone almost instantaneously.”

Wildman said she uses Instagram's “live” function to find out what is happening during protests, especially when protesters in the back might not know what's happening at the front. At one, she said, people started yelling that police were using tear gas — but it wasn't true, which she learned by checking Instagram.

Organizers are also using Telegram, an app that allows private messages to be sent to thousands of people at once, creating channels for specific cities to give updates on protest times and locations, as well as updates on where police are making arrests or staging. One New York City Telegram channel for the protests grew from just under 300 subscribers on Monday to nearly 2,500 by Friday.

During a peaceful rally in Providence, Rhode Island, on Friday, Anjel Newmann, 32, said that while she’s mostly using Instagram and Facebook to organize, younger people are using Snapchat. The main problem: It’s hard to tell which online flyers are legitimate. “That’s one of the things we haven’t figured out yet,” she said. “There was a flyer going around saying this was canceled today.”

The simplicity of shooting and sharing video has also made possible recordings of violence that can spread to millions within moments. A smartphone video of Floyd’s death helped spark the broad outrage that led to the protests.

Apps like Signal are seeing an uptick in downloads according to Apptopia, which tracks such data. Signal was downloaded 37,000 times over the weekend in the U.S., it said, more than at any other point since it launched in 2014. Other private messaging apps, such as Telegram and Wickr, have not seen a similar uptick.

One new user is Toby Anderson, 30, who also attended the Providence rally on Friday. Anderson, who is biracial, said he downloaded the encrypted Signal app several days earlier at the request of his mom. “She’s a black woman in America,” he said, worried about his safety and eager to grasp any additional measure of security she could.

Meanwhile, apps like Police Scanner and 5-0 Police Scanner, which allow anyone to listen to live police dispatch chatter — and may be illegal in some states — racked up 213,000 downloads over the weekend, Apptopia said. That is 125% more than the weekend before and a record for the category. Citizen, which sends real-time alerts and lets users post live video of protests and crime scenes, was downloaded 49,000 times.

On the down side, the Anti-Defamation League's Center on Extremism said in a blog post this week that it has found white nationalists using Telegram to try to wreak havoc during the protests.

“Some, especially those in the accelerationist camp, are celebrating the prospect of increased violence, which they hope will lead to a long-promised ‘race war,’” the ADL said Monday. “They are extremely active online, urging other white supremacists to take full advantage of the moment.”

In one Telegram channel, the ADL found, participants suggested murdering protesters, then spreading rumors to blame the deaths on police snipers.

Others want to further exacerbate racial tensions. “Good time to stroke race relations” and “post black live’s don’t matter stickers,” a user posted — with misspellings — to the Reformthestates Telegram channel, according to the ADL.