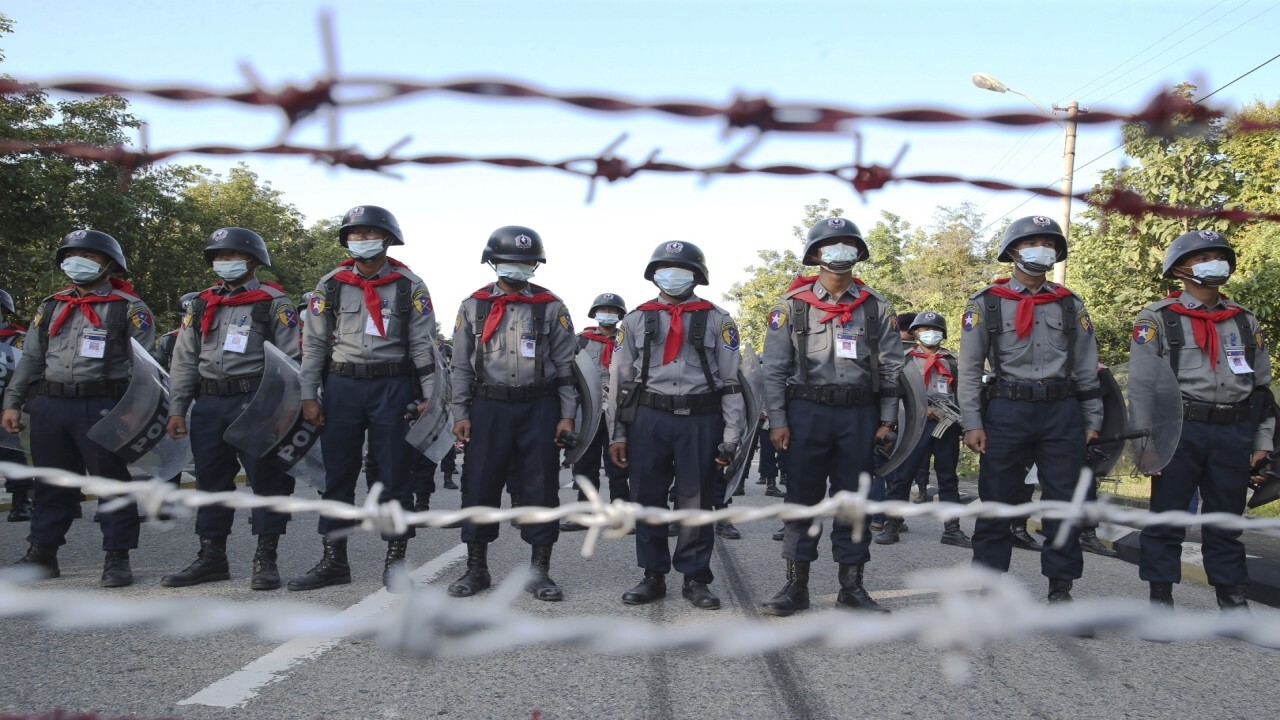 'The Next Revolution' host discusses how best to promote change in the Southeast Asian nation.

Facebook will "significantly reduce" content from accounts linked to the Burmese military as the Southeast Asian nation grapples with a military coup.

The social media platform said in a Thursday blog post that it has put "several measures in place to support our community in Myanmar," or Burma, such as "the decision to significantly reduce the distribution of all content on Facebook Pages and profiles run by the Myanmar Military (“Tatmadaw”) that have continued to spread misinformation."

"We have also indefinitely suspended the ability for Myanmar government agencies to send content removal requests to Facebook through our normal channels reserved for authorities around the world," Facebook's director of policy for APAC emerging countries, Rafael Frankel, wrote in the post.

Demonstrators ride on a vehicle with an image of deposed leader Aung San Suu Kyi in protest against the military coup in Yangon, Myanmar Thursday, Feb. 12, 2021. Myanmar's coup leader used the country's Union Day holiday on Friday to call on people t

At the same time, Facebook will be "protecting content, including political speech, that allows the people of Myanmar to express themselves and to show the world what is transpiring inside their country."

Tensions in Burma escalated last week when the Burmese military seized power shortly after detaining the country's new democratically elected leader, Aung San Suu Kyi. The military has since blocked access to Facebook as calls for protest grew throughout the nation.

Democratic Vermont Sen. Patrick Leahy noted during an April 2018 Senate hearing on the company's use of personal data that "U.N. investigators blamed Facebook for playing a role in inciting the possible genocide in Myanmar, and there has been genocide there" against Rohingya Muslims.

The Rohingya were targeted in a brutal 2017 army counterinsurgency campaign that drove more than 700,000 to neighboring Bangladesh. Critics say the army’s actions constituted genocide.

Leahy said Facebook did not act fast enough in removing harmful content that may have incited violence, citing the U.N. investigation.

Facebook later admitted that it didn’t do enough to prevent its services from being used to incite violence and spread hate in Burma and removed several accounts linked to Burma's military, including that of Senior Gen. Min Aung Hlaing, the officer who led last week’s coup.

The company said it "can and should do more" to protect human rights and ensure it isn’t used to foment division and spread offline violence in the country, according to a blog post from Alex Warofka, a product policy manager.

Facebook then commissioned the nonprofit Business for Social Responsibility to study the company’s role in Burma and released the group’s 62-page report in November 2018. The report confirmed that Facebook was used to inflame ethnic and religious conflict in the country, particularly against Rohingya Muslims.

Frankel, in the Wednesday blog post, detailed a number of ways Facebook plans to suppress hate speech and misinformation, and offer protections for free speech on the platform.

The company said, for example, that it would provide "extra protections for journalists, civil society activists, human rights defenders, and deposed political leaders to prevent online threats against them" and help "anyone who reasonably fears detention to secure their Facebook accounts and data from unauthorized access."