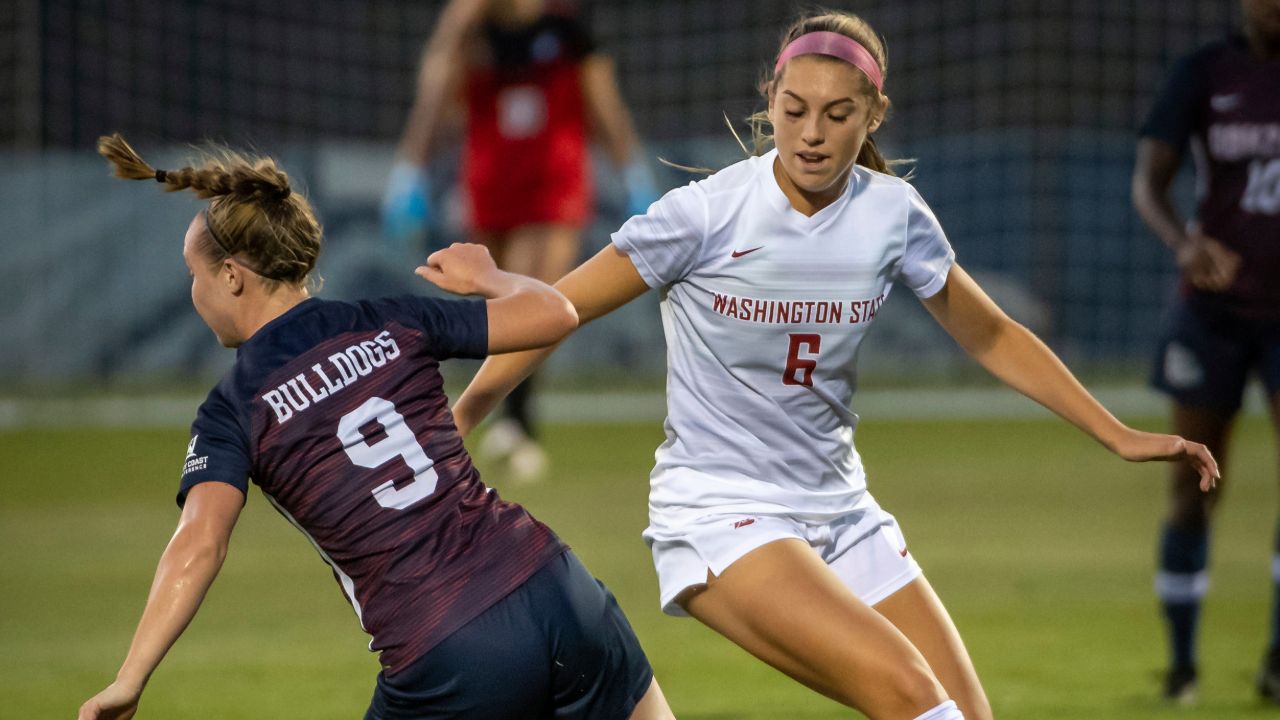 PORTLAND, Ore. — Morgan Weaver laughed it off when her agent told her she was going to be the second pick in the National Women's Soccer League draft.

A four-year starter at Washington State, Weaver wasn't among the names getting a lot of buzz heading into the January draft.

“He told me and I was like, 'OK, right. Whatever. I don’t believe you,'” she said, recalling the conversation she had before her name was announced. “Then it actually happened.”

In this Sept. 5, 2019, photo, Washington State forward Morgan Weaver (6) competes for the ball with Gonzaga's Maddie Cooley (9) during a college soccer match in Spokane, Wash. (Colin Mulvany/The Spokesman-Review via AP)

CORONAVIRUS COULD IMPACT SPORTS FOR LONGER THAN ANTICIPATED

Weaver went to the Portland Thorns, who also got the first overall pick, Sophia Smith out of Stanford.

Weaver said one of her greatest strengths as a player is that she's a good learner. But for now, like the rest of the NWSL's players, she's learning to be patient.

The league was supposed to start its eighth season this weekend with plenty of momentum behind it courtesy of an enthusiastic new commissioner in Lisa Baird and a new TV deal with CBS.

The league was also riding a surge in attention following the United States' victory in the Women's World Cup last summer. The national team's players are scattered throughout the NWSL, with U.S. Soccer paying their salaries.

US SOCCER APOLOGIZES FOR ARGUMENTS IN EQUAL PAY CASE

The nationally televised opener between the Washington Spirit and OL Reign was originally scheduled for Saturday afternoon at Audi Field. The Thorns were supposed to host the Utah Royals on Saturday night.

Becky Sauerbrunn, a defender who was on that winning World Cup team, was about to make her Thorns debut after a trade from the Utah Royals in the offseason.

“It’s been a little bit of a bummer to get the trade done, join the Thorns and then not actually meet any of the Thorns in person. And so that’s been a sad part about this for me personally, is that I didn’t get to start preseason and kind of get my feet wet with the team,” Sauerbrunn said.

Saturday might have also marked Weaver's debut on the Thorns' roster.

The rookie forward has had a whirlwind six months. First, she helped lead Washington State to the semifinals of the NCAA College Cup for the first time in school history.

XFL FOR SALE AMID BANKRUPTCY PROCEEDINGS

The unseeded Cougars were the tournament's Cinderella after knocking off top seed Virginia in the second round, downing West Virginia 3-0 and blanking South Carolina 1-0 in the quarterfinals. The run came to an end in the Final Four, when Washington State fell 2-1 to North Carolina.

“I knew we had it in us and I knew that we had the fight and the grit. I think we just all had to believe in ourselves -- and I think that’s what happened,” Weaver said. “Once we hit the tournament, we all believed in each other, knew what we had to do to get to that spot. And I think that was what helped us through everything.”

Weaver had 15 goals as a senior and finished her Washington State career with 43, second-most in program history.

The Thorns traded up to the second pick to select Weaver. After she was drafted, she got a shoutout on Twitter from Jacksonville Jaguars quarterback Gardner Minshew, who also played for the Cougars.

She said she went into the draft not knowing where she might land.

“I was just going in with an open mind. I didn’t really read any of the articles saying where I should have gone or what I should have done, or why I went No. 2,” she said. “I kind of just left it alone, and was like 'I earned this and I’ve worked as hard as I can.'”

Weaver had already reported to her first pro training camp when the NWSL was shuttered. Currently, she spends her days working out with her roommate, Thorns defender Christen Westphal.

Weaver understands there are much bigger things to worry about than sports right now. But she can't help but feel disappointed.

“I mean, yes. But also, this thing, coronavirus, it’s just crazy what’s been going on,” she said. “Everyone just needs to stay safe and I think that’s been more important than starting this season.”