The majority of Americans support Houston Rockets General Manager Daryl Morey’s decision to back pro-democracy protestors in Hong Kong earlier this month despite its role in an ongoing dispute between the NBA and China, according to poll results released Friday by Seton Hall University.

The poll found 77 percent of Americans said the Rockets should retain Morey as the team’s general manager and defend his right to freedom of speech. Just nine percent of respondents said Morey should be fired over his tweet.

“The fundamental right of free speech seems to have carried the day in favor of Daryl Morey’s tweet,” said Rick Gentile, director of the Seton Hall Sports Poll.

Morey shared, and quickly deleted, a tweet expressing solidarity with the Hong Kong protestors. The post generated an instant backlash among Chinese fans and sponsors, with most opting to suspend ties with the NBA after Commissioner Adam Silver backed Morey’s right to freedom of speech.

Silver later said that he rebuffed demands from the Chinese government to fire Morey. 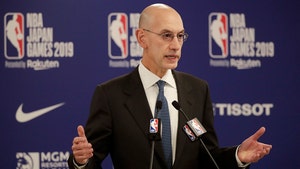 Vice President Pence accused the NBA and Nike of choosing their business interests in China over American values.

More than half of Americans — 54 percent — said Morey deserved praise of backing the Hong Kong protestors, while 19 percent said he should have considered the potential damage to the NBA’s financial relationships in China.

Vice President Mike Pence criticized the NBA and Nike in a speech earlier this week, arguing that the two companies have placed their business interests in China over American values. Silver was singled out for criticism earlier this month after the NBA’s initial response to Morey’s tweet was deemed too apologetic.

Los Angeles Lakers star LeBron James, who accused Morey of being “misinformed” on Hong Kong, also drew a skeptical response. More than half of respondents —52 percent — believe James, who has strong financial ties to the Chinese market through his $1 billion partnership with Nike, was acting out of financial self-interest when he criticized Morey. Just 28 percent believed his comments were sincere.

More than two-thirds of Americans — 69 percent — believe China exerts too much influence over the NBA.

The nationwide poll of 703 adult Americans was conducted by telephone from Oct. 21 to 23 by the Sharkey Institute, a branch of Seton Hall University’s Stillman School of Business. Phone numbers were drawn from among samples of standard landlines and cell phones.